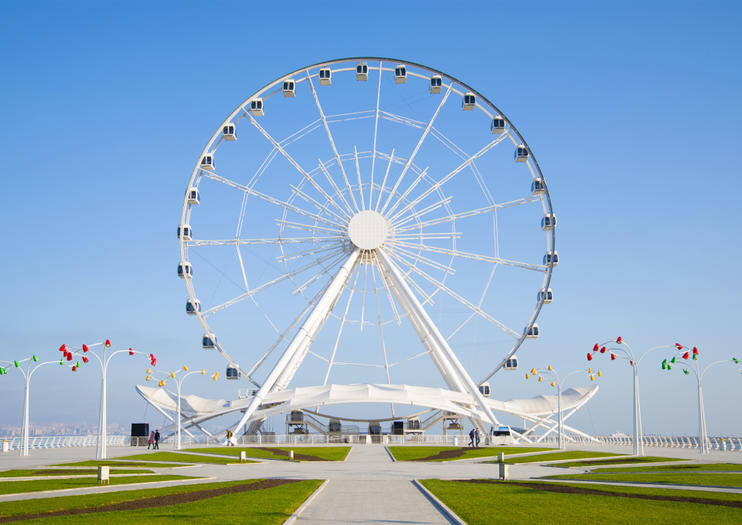 Boasting a prime location on a boulevard overlooking the Caspian Sea, the Baku Ferris Wheel (Baku Eye) offers panoramic views of the city and its coastal surroundings. The wheel was originally built for the Eurovision Song Contest, which Azerbaijan hosted in 2012, and has since become one of the city’s most visible attractions.

The Basics
The Baku Ferris Wheel has 30 cabins which each fit eight people, and it rotates at a leisurely pace. Cabins are usually shared between multiple groups, but you can also pre-book a private experience. Once onboard, sit back and take in great views of Baku’s top attractions, including Fountain Square, Baku Old City, and the Heydar Aliyev Center. The illuminated wheel is also a feature of most evening city tours.

How to Get There
The ferris wheel is about a 20-minute walk along the waterfront from Baku Old City and can be reached on the 5, 6, 88, and 125 buses. The most convenient way to visit the Ferris Wheel is as part of a sightseeing tour that includes round-trip transfers from your hotel.

When to Get There
The Baku Ferris Wheel is open daily from noon until late at night. Sunset rides offer particularly stunning views and photo opportunities.

The Best of Baku
As the capital city of Azerbaijan, Baku boasts a wealth of attractions. After getting a birds eye view on the ferris wheel, visit the historic Old City, which is surrounded by ancient walls that date back to the 12th century; the restored Palace of the Shirvanshahs; and the super-sleek Heydar Aliyev Center, which houses a museum dedicated to Baku’s history.
Address: Baku, Azerbaijan
Admission: Varies
Read MoreShow Less

1
Welcome to the Pearl of the Caucasus, a land where eastern colours combine magnificently with western progress. Experience the country of unique nature, unmatched culture, centuries of history with its customs and traditions and fine cuisine. Here You will find the real Caucasian hospitality and friendliness. This tour is an ideal introduction to Baku for travelers who have limited time in Baku. All must-see places are included to the program with entrance fees. Catering during the tours are also included to the price. You just need to book your hotel, and we will take care of the rest: - Transfer from/to Airport - Tours & Admission fees - 2 Lunches & 1 Dinner
…More
From
$101.29
From
$101.29

Baku, our sunny, maritime capital city is a testament to our creativity and culture. While Baku looks forward to greeting its guests with a cheerful and welcoming atmosphere, one could easily mistake it for a Mediterranean city. Baku Boulevard, officially known as Seaside Park also caters to tourists. Here, too, everything is beautiful and neatly ordered. The Fountain Square in Baku is considered to be the epicenter of life in the country.
…More
From
$46.16
Price varies by group size
From
$46.16
Price varies by group size

Spend fascinating days discovering the wonders of Baku! Embarking daily from your hotel in Baku, this 4-day tour takes you to the best places that the city has to offer. Experience the capital’s diversity and learn about local history and culture through must-do excursions to popular attractions and museums. Also, don’t miss the opportunity to taste Azerbaijan’s traditional cuisine and its rich variety.
…More
From
$325.13
Price varies by group size
From
$325.13
Price varies by group size

Take a fresh breeze of the Caspian Sea and take incredible panoramic views of Baku. Admire the miraculous architectural mix of east and west contrasts.The Boulevard is a promenade that runs parallel to Baku’s seafront. This area is popular for strolling among locals.
…More
From
$23.59
Price varies by group size
From
$23.59
Price varies by group size

Things to do near Baku