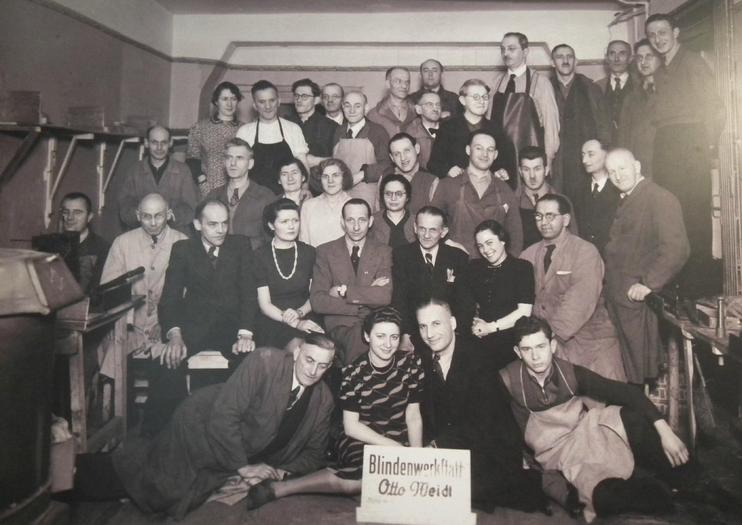 A unique and moving tribute to one of the everyday heroes of World War II, the Otto Weidt Museum tells the story of the site's history as Weidt's Workshop for the Blind. Visually impaired himself, Weidt owned and ran a factory in this space, producing brooms and brushes during the war and employing about 30 blind and deaf Jews between the years of 1941 and 1943.
Weidt went to great lengths to keep his employees safe from persecution, even finding places for some to hide, falsifying documents, helping them escape from assembly camps by bribing the Gestapo to have his workers released.
Today, the museum is devoted to telling compelling Weidt's story with letters, poems and photographs displayed alongside the personal stories of his former employees. The workshop is mostly in the same state it was in during the war, allowing travelers to get an authentic look at the conditions where employees worked and where one family hid behind a backless cupboard in the space.

620
Explore the chilling legacy of Germany’s Third Reich during this 4-hour walking tour of Berlin. Follow your historian guide on a walk to the ruins of Anhalter Bahnhof, previously Europe’s largest train station, used to deport prisoners to concentrations camps. You'll also visit the former headquarters of the SS and Gestapo, concluding at the Reichstag, the German parliament building. Your guide will contextualize the rise of the Nazis as you go, offering insight into those who resisted as well as the horrific impact of the Holocaust.
...  More
From
$18.50
From
$18.50
Learn More

5
Uncover Berlin’s Jewish heritage and culture on this private, 4-hour walking tour. Explore the city’s Jewish quarter with your very own guide, and gain insight into the history of Berlin’s Jewish community, from the 17th century right through to today. Visit key landmarks like the Old Jewish Cemetery, the New Synagogue and Otto Weidt Museum. See, too, the Missing House and Hackesche Höfe and learn about those who once lived there.
...  More
From
$202.29
Price varies by group size
From
$202.29
Price varies by group size
Learn More

10
To uncover the Jewish history of Berlin, nothing compares to a tour of the historic Jewish Quarter, with a guide to lead the way. As you explore the Hackescher Markt area, discover the history of the neighborhood and its Jewish residents dating back hundreds of years. Highlights include stops at significant neighborhood sights, like the Denkmal alte Synagoge, the Memorial Jewish Cemetery, and the Missing House.
...  More
From
$265.56
per group
From
$265.56
per group
Learn More

61
Develop a greater understanding of Berlin’s Jewish community, both past and present, on this guided small-group walking tour. Explore Berlin’s former Jewish quarter and learn about the city’s Jewish heritage from the 17th century to today. See landmark sites like the Old Jewish Cemetery, the New Synagogue, the courtyards of Hackesche Höfe and more. Also, visit the Blindenwerkstatt Otto Weidt, a 1940s-era factory where workshop owner Otto Weidt protected his blind and deaf Jewish workers from persecution during the Holocaust.
...  More
From
$18.50
From
$18.50
Learn More

The Jewish Private Tour - A journey into the Jewish past of Berlin with N. Jacob

6
Get to know Berlin’s Jewish history with the help of a private guide. This comprehensive walking tour takes in must-see landmarks such as the Neue Synagoge and Holocaust Memorial along with the Mitte neighborhood’s quirky Scheunenviertel and architecture-rich Hackesche Höfe districts. As a private tour, you start with a hotel pickup and even get to choose your preferred start time for an experience that’s tailored to you.
...  More
From
$256.57
per group
From
$256.57
per group
Learn More

9
Take advantage of your guide’s insight to learn about the former capital of the Third Reich during this half-day walking tour of Berlin. Visit several historically significant sites—including Hitler’s Bunker, the holocaust memorial, and more—without the stress of planning your own route. Then, after gaining a different perspective on the now-popular city, end your tour in the Jewish district.
...  More
From
$31.64
From
$31.64
Learn More

3
A journey through almost 400 years of Jewish life in Berlin, where the largest Jewish community in Germany has lived, and where the atrocities of the Nazi regime began. We will visit some of the most important sites to Jewish life, then and today. From the monumental New Synagogue, the first Jewish cemetery, the street where the first Jewish families settled and much more. Placed which survived, places that were destroyed and some that have been rebuilt, and that will tell us the fascinating story of Berlin's Jewish community, which was almost erased during World War II.
...  More
From
$161.83
per group
From
$161.83
per group
Learn More

1
Delve deep into the history of Jewish Berlin on this comprehensive private walking tour. Save hours of research time, and enjoy a guide’s shortlist of important landmarks, such as the New Synagogue, The Missing House monument, the Holocaust Memorial, and much more. Have the flexibility of being able to choose a preferred start time, with hotel pickup and drop-off included.
...  More
From
$379.59
per group
From
$379.59
per group
Learn More

2
This tour, tracing Jewish life in a Berlin district where such life is luckily seeing the hint of a renaissance, focuses on architecture, but most and foremost on history and on facts, brought to you by a trained and experienced historian with a PhD in a Holocaust-related topic.
...  More
From
$231.19
per group
From
$231.19
per group
Learn More

10
Discover the history of Berlin's Jewish Community, which is as old as the history of the city itself. Learn how from very simple beginnings, Berlin became the home to one of the most successful Jewish communities in the world. Our guides, who are all academics living in Berlin, will take you on an unforgetable journey.
...  More
From
$427.70
per group
From
$427.70
per group
Learn More

3
For more than 25 years we have been showing important, hidden, and forgotten Third Reich and World War Two sights to guests from all over the world. This tour offers you a unique opportunity to see the heart of the German capital during its most tragic and regrettable moments. With the use of your private air-conditioned vehicle we will be able to take you to sights that many guests don't get to see: from the Olympic Stadium in the West of the city to the Soviet War Memorial in the heart of Berlin's largest park, the Tiergarten. We will show you the Reichstag, where Hitler came to power in 1933, and the site of the bunker, where he took his own life in 1945, just as WWII was coming to an end. Throughout the day you will see memorials for several different victim groups of the Nazi regime, including homosexual, mentally and physically disabled, Jewish, and Sinti and Roma victims, amongst others. At the end of the tour your driver will bring you back to the port of Warnemünde.
...  More
From
$808.58
Price varies by group size
From
$808.58
Price varies by group size
Learn More

Berlin was the dark heart of Nazi Germany – the capital city of a dictatorship that was responsible for waging a war that destroyed swathes of the European continent and industrially murdering millions. Why did the Germans think they needed Adolf Hitler in 1933? How could a civilised people fall so deep into the moral abyss? Why were Jewish and other minority groups, both in Germany and across Europe, ruthlessly targeted? What is the legacy of Nazism in Germany today? This tour answers such questions, giving crucial context regarding the rise of Adolf Hitler in pre-Nazi Germany, providing a comprehensive overview of the National Socialist capital, and telling the dramatic tale of the Battle of Berlin and the collapse of the regime in 1945.
...  More
From
$206.20
Price varies by group size
From
$206.20
Price varies by group size
Learn More

1
Don’t let travel issues hold you back from exploring the places you’re most interested in. This private virtual tour of Berlin's Jewish Quarter lets you see the area on screen from home in real time with a guide who takes you to popular sites such as the Museum Blindenwerkstatt Otto Weidt and Haus Schwarzenberg. Plus, this virtual tour isn’t limited to just one device, and up to 15 of your family or friends can join, too.
...  More
From
$68.20
per group
From
$68.20
per group
Learn More

3
Get off the beaten track and explore Berlin's former Jewish Quarter – all from the comfort of your own home using your computer. Travel the world safely, responsibly and sustainably, and interact live and in real time with a local to discover the German capital's most interesting backstreets and hidden spots. This is a live virtual tour – our professional local Berlin tour guide will meet you virtually via Zoom app and take you on a private tour where you can ask any questions you like. The entire tour is interactive and we will be showing you relevant historical photos and videos as well to enhance the experience. The video calling software used for the tour is called Zoom. You will need to have it downloaded on your laptop, tablet or cellphone – with a connection to speakers or headphones – in order to participate in the tour.
...  More
From
$33.52
Price varies by group size
From
$33.52
Price varies by group size
Learn More

Things to do near Berlin