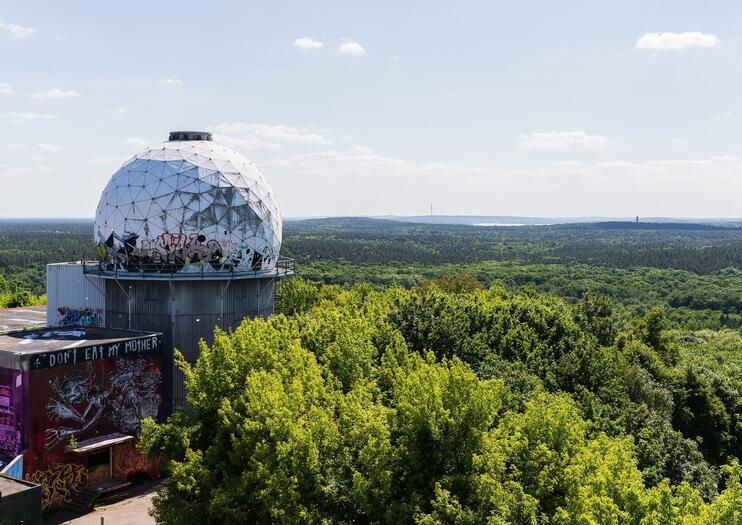 Overview
One of Berlin’s most unusual attractions, Teufelsberg once hosted a Cold War–era American spy station. Today, the man-made hill located on the edge of the Grunewald forest is a popular destination for day-trippers. Some 262 feet (80 meters) high, Teufelsberg is crowned by the abandoned station, now covered in street art.

The Basics
Constructed from rubble and debris following the end of World War II, Teufelsberg has a somewhat macabre history, supplemented by the lore surrounding its spooky, dilapidated listening station. Built by the United States National Security Agency and used throughout the Cold War, the station has been taken over by street artists from around the world, who have turned it into an ever-changing canvas. Open to paying visitors for the past several years, the site also offers impressive views over the forest and cityscape beyond.

Tickets to the listening station can be purchased online in advance.

Things to Know Before You Go
How to Get There
To get there via public transit, take the S-Bahn (aboveground train) to Heerstrasse station or Grunewald station, both of which are a moderate walk from Teufelsberg. Alternatively, travel by bike or car—paid parking is available on-site.

When to Get There
Teufelsberg’s listening station is typically open Wednesday through Sunday—check the hours online. In summer, the hill and surrounding forest are popular places to stroll, picnic, and soak up the sun; in winter, the hill attracts sledders and families.

What to Do in the Grunewald Forest
City dwellers and travelers alike flock to the Grunewald forest for a nature fix. During the summer months, sail on the Teufelssee lake, go for a swim in the Havel River, or simply walk the path that borders it (the Havelhöhenweg). Dogs are allowed on numerous trails, and historic sights like the Jagdschloss Grunewald are also worth seeking out.
Address: Berlin 14055, Germany
Read MoreShow Less

1 Tours and Activities to Experience Teufelsberg

Guided Bike Ride from Berlin into Its Surrounding Nature and History

These sporty guided day tours take you from Berlin into the city’s naturally and historically rich surroundings. Under the care of a passionate and knowledgeable guide, you’ll bike along the nicest bike routes to some of the most beautiful and surprising spots surrounding Berlin. While being active and out in nature, you get to see a variety of places that for most remain unknown. So join one of our tours and discover the hidden treasures in Berlin's backyard, with its wonderful forests, lakes and rivers, overflowing with history.
...  More
From
$33.27
From
$33.27
Learn More

Things to do near Berlin