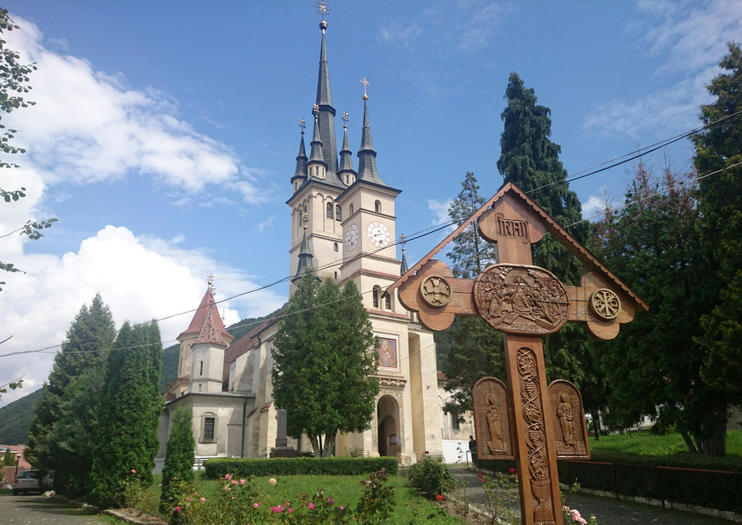 The Basics
St. Nicholas Church was first built out of wood, then replaced with a Gothic stone structure in the late 15th century and expanded in the 18th century. The church features a slender central tower, four smaller corner towers, and an ornate interior decorated with icons and frescoes. Some Brasov walking tours include a visit to St. Nicholas Church along with other attractions such as the First Romanian School, Black Church, and Council Square.

When to Get There
St. Nicholas Church is open daily, year-round. Most people spend less than an hour at the church and cemetery, and usually combine their visit with a trip to the adjacent First Romanian School.

7
Get an introduction to Braşov Old Town with this 2-hour walking tour. Wander down Easten Europe’s narrowest alleyway, see the candy-colored houses of Piata Sfatului Square and get up close to St Nicholas Church, the Black Church and other notable sights. As you stroll, learn about Braşov’s history — from the Middle Ages through to present day — and receive the personalized attention of the guide. Numbers limited to 10 participants on this small-group tour.
…More
From
$11.88
From
$11.88
Face masks required for travelers in public areas
Face masks required for guides in public areas
Hand sanitizer available to travelers and staff
Learn More
Taking safety measures

1
A unique tour of the Brasov old city. Explore the former fortified complex of Brasov with the help of escooters. Gain mobility and discover many popular landmarks within a short time-frame. Up to 15 km covered. Warm-up time included. Tour starts only when all participants are in full control of the escooters. Licensed tour guide leads the group. Stops for photos and sightseeing.
…More
From
$60.94
Price varies by group size
From
$60.94
Price varies by group size

Things to do near Brasov