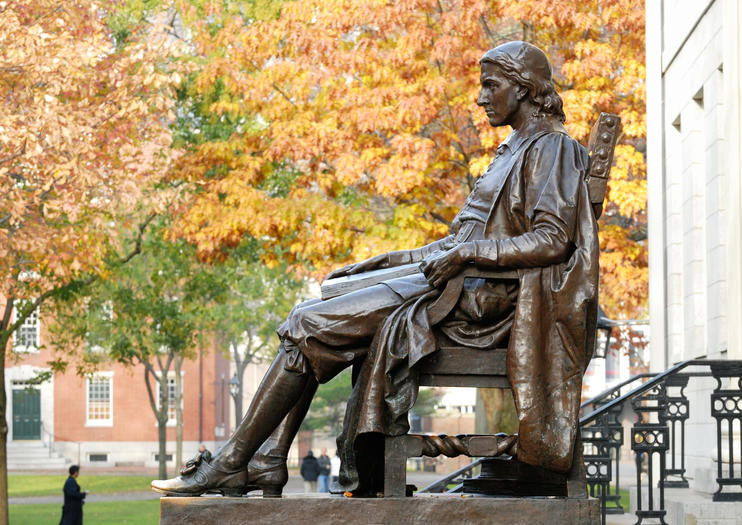 This bronze statue, which stands at the center of Harvard Yard, is frequently visited by both travelers and prospective students, and it’s also been the target of dozens of pranks since its unveiling. Whether it’s covered in tar, paint, or some other substance, the John Harvard statue remains at the heart of the school named for him … even though the statue isn’t actually of him.

The Basics
Historians aren’t exactly sure what the founder of Harvard University looked like, so artist Daniel Chester French used one of Harvard’s descendants as inspiration for this 1883 statue. Some call it the “Statue of Three Lies” in reference to its inscription, which reads: “John Harvard, Founder, 1638.” Harvard was a major donor, not the founder; the university was established in 1636, not 1638; and the model for the statue was Sherman Hoar, not Harvard. Regardless, this image is among the most recognized in the city, and a stop here is common stop on walking tours of Cambridge.

How to Get There
The John Harvard Statue is located in Harvard Yard in Cambridge, just north of Boston. If you are traveling by car to the university, take Interstate 93 to exit 26/26A. Note that parking is very limited around Harvard Square, but private garages are available. To avoid parking hassles, take Boston’s subway, which is known as the T, to the Harvard stop, across the street from Harvard Yard.

When to Get There
Expect smaller crowds in Cambridge in the summer, when school is out. From June to October, more tourists than students will be on campus, making it easier to explore. Come fall, visitors frequent the area to check out the colorful foliage. In general, travelers tend to avoid Boston and Cambridge in the winter when temperatures can be frigid.

Harvard Book Store
Open since 1932, this locally owned, independent bookstore is known for its extensive selection of new and used books. Customers can even print paperback books on-site from electronic files that are available online. The bookstore also hosts author events and readings throughout the year, as well as organizing a book circle.
Address: 1 Harvard Yard, Cambridge, Massachusetts 02138, USA
Read MoreShow Less

360
For anyone thinking of attending Harvard, or for those who simply want a glimpse of college life at the famous university, this tour is a must. Get an exclusive account from current Harvard students, who provide key insights into the life and times at Cambridge with a theatrical, humorous flair. Check out the old buildings at Harvard Yard and Harvard Square and learn about the school’s storied past. Illustrated map of Harvard Square included. Choose from several departure times throughout the day.
...  More
From
$19.50
From
$19.50
Learn More

20
Explore the campuses of two of America’s oldest and most prestigious universities, Harvard and MIT (Massachusetts Institute of Technology), on a guided walking tour led by a current student. Chuckle your way through a casual excursion that is designed to give visitors a sense of student life, learn “Hahvahd” lore, gain amusing insights from an insider, and have a few laughs at the expense of these elite institutions.
...  More
From
$26.00
From
$26.00
Learn More

Get a taste for the pleasures of collegiate life during this 2-hour sunset walking tour of historic Harvard Square. Stroll the grounds of the world’s most famous university, soaking up the array of street performers, socializing students and historic haunts that give this iconic college in Cambridge, Massachusetts its unique vibe. During your walk you’ll explore Harvard Yard, walk along colonial Brattle Street and discover centuries-old landmarks like the Old Burial Ground Cemetery. A professional guide is included to help add insight to your walk.
...  More
From
$456.00
per group
From
$456.00
per group
Learn More

88
For anyone thinking of attending Harvard, or for those who simply want a glimpse of life at the famous university, this guided tour is a must. Get an exclusive account from Harvard students, who provide key insight into the times at Cambridge. Check out the old buildings at Harvard Yard and Harvard Square and learn about the school’s storied past. After the walking tour, explore the Harvard Museum of Natural History on your own.
...  More
From
$24.99
From
$24.99
Learn More

3
Enjoy this 90-minute, private tour of Harvard University for you and your guests! The tour is completely customizable to fit your group’s needs. Throughout this tour, your informative guide – a current university student – will offer a unique perspective of college life at the famed institution. As you tour the grounds, be entertained by your guide’s stories and Harvard lore – partly scripted and partly shared from personal experience. Learn about the most famous people that attended Harvard, hear historical anecdotes and get an insider’s view on current college life. After a stop at the Plaza, Winthrop Park and Mt Auburn Street in Harvard Square, complete your tour at the Harvard Cooperative Society (COOP), the University’s official bookstore.
...  More
From
$275.25
per group
From
$275.25
per group
Learn More

Visit the heart of Harvard University's campus in Cambridge: Harvard Square! This tour covers must-see campus sights like the John Harvard Statue, Widener Library, and former dorms of famous alumni like Bill Gates, Mark Zuckerberg, Natalie Portman, and more. Explore Harvard’s history, legacy, and fame in full. After you book the tour, we will email you the link to download the app and the password to download the tour. You can use the app to take the tour. Please download the app and the tour when you have a good internet connection.
...  More
From
$5.00
From
$5.00
Learn More