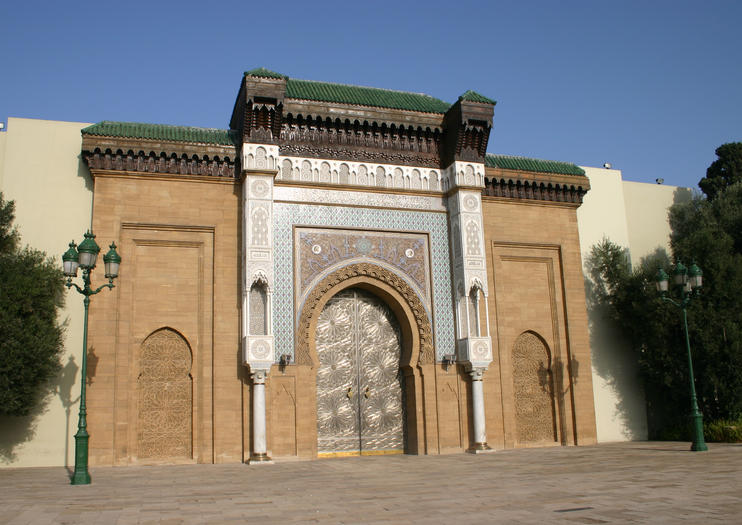 A masterpiece of Islamic architecture, surrounded by picturesque orange groves and elaborate water features, the Royal Palace of Casablanca is a suitably grand royal abode. Located in the Habous district of the city’s New Medina, this is the King’s principal Casablancan residence and host to a number of important events and royal receptions.
The palace grounds, as with most Moroccan royal residences, are closed to the public, but that doesn’t stop it from being a popular attraction on city tours. If you’re lucky enough to peek through the ornate gates, you might catch a glimpse of the spectacular façade, flanked by a team of uniformed royal guards.
Address: Palais Royal de Casablanca, Casablanca, Morocco
Read MoreShow Less

7 Tours and Activities to Experience Royal Palace of Casablanca

7
Explore the legendary city of Casablanca on a 4-hour, private tour of the city with a personal guide and driver. Walk the narrow streets of the traditional Habbous neighborhood, and see the city’s most iconic landmarks. Visit sprawling squares and markets filled with brilliant handicrafts and souvenirs, then stand beside the high gates of the King’s Royal Palace. See religious buildings and historic sites, and discover a brand new shopping mall by the picturesque corniche. Enjoy the flexibility of a private tour to see the city at your own pace.
...  More
From
$90.40
Price varies by group size
From
$90.40
Price varies by group size
Learn More

11
Explore Casablanca’s modern streets and historic sites on a full-day, guided sightseeing tour through Morocco’s most dynamic city. Walk the atmospheric streets of the habous district and slip through arcades lined with teashops and bazaars. Visit the elegant United Nations Place and Mohammed V Square, discover a soaring mosque and striking, modern cathedral, and pause alongside the walled Royal Palace, whose gates are worked with intricate designs. Get a glimpse of Casablanca’s sophisticated residents in the gleaming Morocco Mall then take in some fresh ocean air from the palm-lined corniche.
...  More
From
$45.77
Price varies by group size
From
$45.77
Price varies by group size
Learn More

1
Enjoy these magnificent cities declared World Heritage sites visiting the most prominent places, such as the Mausoleum of Mohammed V and the Hassan Tower of the twelfth century. You can venture into both the medinas (old town) and the Roman and medieval ruins in Chellah with your official guide during this private tour. - SAVE COVID-19 SAFE - As this is a private tour we take care of maintaining social distance
...  More
From
$271.78
Price varies by group size
From
$271.78
Price varies by group size
Learn More

42
Get to know Casablanca’s highlights on this 3-hour tour — one of the most comprehensive of all Casablanca tours. Choose a morning or afternoon tour, and discover the landmarks by air-conditioned vehicle as your guide recounts stories about each sight. Admire top Casablanca attractions including the Hassan II Mosque, Royal Palace and Central Market (only on morning tours); see the elegant Habbous quarter, created by the French in the 1920s; and enjoy free time to stroll along the scenic, palm-lined Ain Diab Corniche. Numbers are limited to 18 people for a more personalized atmosphere.
...  More
From
$77.81
From
$77.81
Learn More

Don’t even think about navigating Casablanca’s public transport system on a short shore excursion. Make the most of even a brief stop in port with this convenient guided tour package that checks off the White City’s signature sights in just half a day. See the scenic Quartier Habous, the Royal Palace of Casablanca, the Hassan II Mosque, the Notre Dame de Lourdes Cathedral, and more. Tour excludes any entrance fees.
...  More
From
$78.96
From
$78.96
Learn More

1
Planning a big Moroccan trip can be very stressful and take a lot of energy. Put your mind at ease and avoid the stressful planning by opting for this private 5-day trip to Morocco from Casablanca. You’ll visit the main highlights of Casablanca, Rabat, Fez, Meknes, and Marrakech, and head into the Merzouga Desert for a camel ride, Moroccan mint tea, and a chance to stay in a nomad camp. Four nights of accommodations and round-trip transport included.
...  More
From
$1,200.00
From
$1,200.00
Learn More

Treat yourself to a visit of the most famous sights of the largest city and busiest port of Morocco and embrace its vibrant culture with the expertise of a certified guide. Visit the United Nations Square, one of the main squares located near the Old Medina and the commercial city heart and follow up with the Mohammed V Square. Reach the Cathedral of Casablanca and admire the neo-Gothic style of the building from latst century.Stop at the spectacular Hassan II Mosque and its famous minaret, the highest in Africa. Stroll at The Corniche, a scenic sidewalk that extends from Hassan II Mosque to El Hank lighthouse.Have an unforgettable moment in the Central Market of Casablanca. Let the rare spices and henné fragrances inspire you.Dive into the Moorish traditional architecture by visiting the Makhama du Pacha, a parliamentary building that also serves as a reception area for state occasions. Finish with an outdoor visit of the Royal Palace located in the French-built Habous Quarter.
...  More
From
$1,029.90
per group
From
$1,029.90
per group
Learn More

Things to do near Casablanca