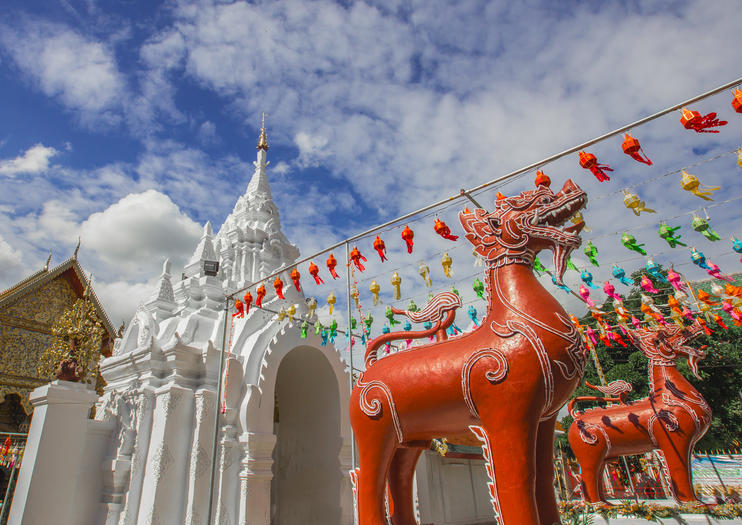 The quiet town of Lamphun offers travelers a charming escape from the busier streets of Chiang Mai. Shallow moats and the peaceful River Kuang border the provincial capital, where local longan fruits are said to be the sweetest in the country; each August the town comes to celebrate its harvest during the annual Lam Yai festival.

The Basics
Many travelers visit Lamphun as part of a day trip from Chiang Mai, often to explore its two notable monasteries. The smaller Wat Chamthewi serves as the final resting place for the legendary Queen Chamthewi, while the walled Wat Phra That Hariphunchai comprises a whole complex of chedis, chapels, and Buddhist statues. The journey between Chiang Mai and Lamphun has become an attraction in its own right. This 16-mile (26-kilometer) stretch of backcountry road ranks among the most scenic in the region. Some tours offer active travelers the option of cycling between the two cities.

When to Get There
The best season to visit Lamphun is during the cool, dry months between mid-November and mid-February. To see the town at its most festive, plan your trip during the annual Lamphun Longan Festival in August.

Luang Pha Waing Cave
Adventurous travelers can head about 28 miles (45 kilometers) outside Lamphun to Luang Pha Waing Cave, one of the largest cave systems in northern Thailand. This network of underground tunnels is only accessible via a steep uphill climb, but visitors say it’s worth the journey—and the hike.
Address: Lamphun, Thailand
Read MoreShow Less

0 Tours and Activities to Experience Lamphun

Things to do near Chiang Mai