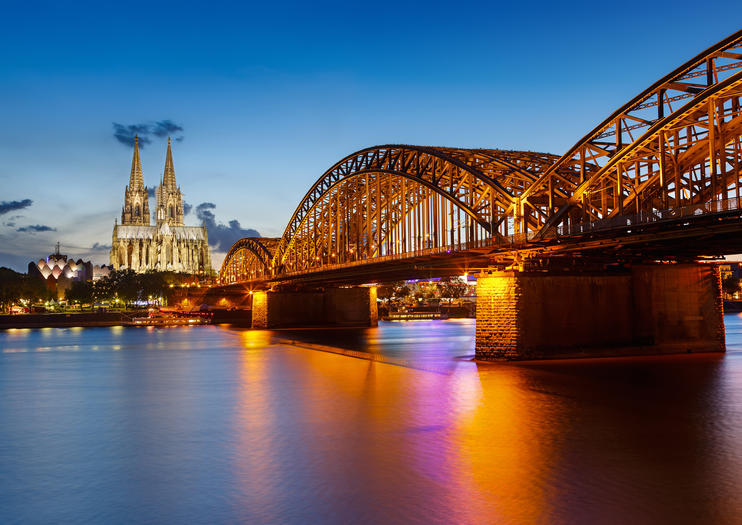 The waters of the mighty Rhine split Cologne in half, and the city is united across a series of seven bridges, with none more splendid than the spans of the Hohenzollernbrücke, which stretch 1,342 feet (410 meters) across the river in three great steel arches.
This spectacular city landmark is almost as famous as Cologne’s twin-spired Gothic cathedral – the largest in Europe – and was completed in 1911, with four railway lines joining Cologne to cities across Europe. German troops destroyed the bridge at the end of World War II in the face of advancing Allied soldiers but it rose phoenix-like once more in 1948. Today it is both a pedestrian and rail bridge with around 1,200 trains passing over it daily and pairs of equestrian bronzes punctuating both ends.
A curious tradition has recently grown up around the Hohenzollernbrücke; lovers affix padlocks to its sides and throw the key into the Rhine in exchange for eternal love. So far the city fathers believe over two tonnes of extra metal is now attached to the bridge.

For the best views of the Hohenzollernbrücke, take a River Rhine boat tour, available as a daytime hour-long trip or a romantic dinner cruise when the lights of the city sparkle off the water.
Address: Cologne, Germany
Read MoreShow Less

90
Admire beautiful Cologne from the water on a sightseeing cruise along the Rhine River. Choose from a range of departure times and watch top Cologne attractions including twin-spired Cologne Cathedral, the Old Town and the Hohenzollern Bridge unfold as you cruise along the world-famous river. Buy drinks such as the much-loved local Koelsch beer from the bar, and hear about Cologne’s long and illustrious history while you sail. If you wish, choose to enjoy a longer, 2-hour evening cruise to see Cologne’s sights sparkling with lights along the riversides.
...  More
From
$14.50
From
$14.50
Learn More

31
Experience the sights and sounds of Cologne from the Rhine river on this 1-hour sightseeing cruise, then dine with no line at the Hard Rock Café Cologne. Enjoy live commentary and take in the scenic panorama of the majestic castles, churches and vineyards along the shores of the Rhine. Also see local attractions like the Hohenzollern Bridge, which crosses the river and gothic Cologne Cathedral. Then skip the waiting line and grab a 2-course meal plus coffee, tea or a soft drink of choice at the Hard Rock Café Cologne.
...  More
From
$36.56
From
$36.56
Learn More

15
Looking for a unique way spend an evening in Cologne? Take a leisurely dinner cruise along the city’s dazzling waterfront! Spend three hours floating along the Rhine River, savoring delicious regional cuisine and listening to music spun by a live DJ. Stroll the deck at sunset, indulge in a freshly prepared buffet and complimentary drinks, and take in beautifully illuminated sights such as Hohenzollern Bridge and Cologne Cathedral after dusk.
...  More
From
$84.57
From
$84.57
Learn More
Reserve Now & Pay Later
We'll reserve your spot today, and you can cancel up to two days* before your experience without making a payment. Secure your spot with ease, stay flexible, and never miss out.
How it works
Find your experience
Choose the experience you want knowing you can secure your spot without being locked in.
Make a reservation
Reserve now and pay later to secure your spot, commitment-free.
Choose when to pay
Come back to pay once your plans are set, or let auto-pay kick in two days* before your experience.
Enjoy your experience
Now you're all set! Have a great time.
Frequently Asked Questions  | Terms & Conditions
*Up to 9 days depending on the booking/product
Reserve Now & Pay Later
Secure your must-do activities without being locked in
Learn More

Best of Cologne with a private guide

4
Birthplace of Eau de Cologne, Cologne is a wonderful medieval city composed of several World Heritage Sites like the Cologne Cathedral and Brühl Castle. This tour covers all Cologne's great architectures, but also its history by visiting the Fragrance Museum, and the Chocolate Museum. It will be a wonder for your sense of smell, taste, and sight. Tour timings are flexible and can be amended depending on availability.
...  More
From
$415.27
per group
From
$415.27
per group
Learn More

Sightseeing tour Cologne with a private tour guide only for you or your group!

Discover Cologne with all your senses! We are offering sightseeing tours in Cologne, Germany, for groups, individuals and businesspersons. Our clients benefit from our local guides. The tour is not centered only around the historical facts and the famous Dom Cathedral, but also around the local culture and people, culinary highlights, hidden gems and insider stories. Please feel free to reach out. Tour timings and itinerary are flexible and can be changed depending on availability and demand. --- Travel brings power and love back into your life .--- by Rumi
...  More
From
$185.86
per group
From
$185.86
per group
Learn More

136
With its scenic waterfront, grand bridges, and UNESCO-listed Cathedral, Cologne offers an atmospheric backdrop for a cycling tour. This bike tour ensures that you maximize your time, exploring much further than a walking tour. The circuit takes in landmarks such as Cologne Cathedral, Hohenzollern Bridge, and the Rhine River, including plenty of photo stops along the way.
...  More
From
$38.42
From
$38.42
Learn More

1
Discover Cologne playfully, with a scavenger hunt! You can expect a modern city rally, where you come across tricky puzzles and interesting information about Cologne's history. Feel like Sherlock Holmes and reveal the secrets of the city. Playfully gain new insights and have fun. On the approx. 2.5km long route you will learn interesting facts and myths, meet women who have shaped the development of Cologne, get to know the attractive places of the Rhine metropolis. Immediately after the start you dive into a world full of hidden clues and enigmatic pictures. At the end of each task, exciting information about the respective sights awaits you. ⭐ HIGH lights »Independence of tourist guides and groups »Only a smartphone with internet connection needed »Suitable for individuals and groups »Playful mediation of interesting contents »Informative, exciting, amusing »Already from 6 Euro per person
...  More
From
$37.64
per group
From
$37.64
per group
Learn More

The Instagrammable Places of Cologne with a Local

This Experience is provided by a private local. If you want to spice up your Instagram feed and impress your friends with stunning shots from your travels then you are at the right place! Let me show you the most beautiful and impressive spots in Cologne and guide you with some useful tips on how to take the best photos with your phone or camera! While strolling through the city and taking photos of the most unique places of Cologne (like the Dom or the old Market as well as the legendary bridge), you will also get to know more about my city and learn about its secrets from a local. Join me on this adventure to give your Insta feed an upgrade! Make sure you don’t book this Experience too late, as we don’t want to miss the golden hour!
...  More
From
$28.99
From
$28.99
Learn More

Spend some time with friends or family and explore Cologne playfully. Together you will visit striking sights, learn interesting facts and solve tricky tasks. You actively communicate with each other, you get closer to each other, you enrich each other with your knowledge. This is exactly what distinguishes our scavenger hunt tour from a conventional city tour. Feel like Sherlock Holmes and reveal the city's secrets! Combine a city tour with an exciting city rally and get to know Cologne better in a modern and fun way. Your city trip will be a gripping experience. ⭐ HIGHTLIGHTS ⭐ »You use your smartphone as a guide, which provides you with a lot of valuable information. »They are independent of opening times, availability or travel guides. »Suitable for locals and city guests »The route length is approx. 2 km. Duration - approx. 2 hours »Starting at 6 EURO per person
...  More
From
$38.13
per group
From
$38.13
per group
Learn More

3
See more of Cologne in less time—and enjoy an active way to explore—on this private bike tour. Pick between numerous daily departure times, meet your guide in the center of town, and grab your bikes and helmets. You’ll cover roughly 10 miles (16 kilometers) of the city, and will spy the UNESCO-listed Cologne Cathedral, Hohenzollern Bridge, Kölner Philharmonie, and more. As you go, learn all about Cologne’s history.
...  More
From
$246.58
per group
From
$246.58
per group
Learn More

Things to do near Cologne