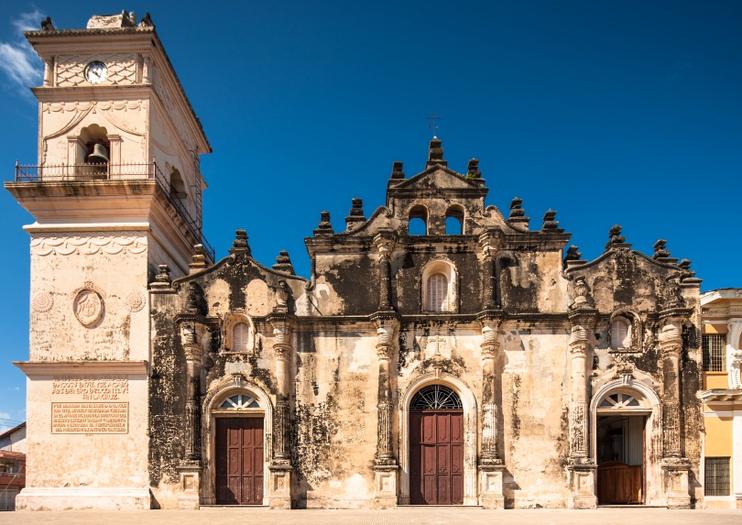 There are several churches in Granada to visit, but the Iglesia de la Merced (not far from Central Park) is noted by many as the city's most beautiful. The church on this site dates from the early 16th century, although it has been damaged twice (to the point of nearly-complete destruction once) and rebuilt, most recently in the 1860s. The present look of the interior is from the most recent reconstruction, while the Baroque facade was added in the 1780s.

Anyone can enjoy a stroll through La Merced church, but the best reason to go is to climb the church's lone bell tower for commanding views of the city center. You will be able to explore the church itself for free, but there is a small admission charge to climb up into the tower. Note that you may need to find a caretaker to gain access to the tower stairs, which are generally open from 10am-6pm on most days, and those who are claustrophobic should be aware it's a narrow spiral staircase to the top.
Address: Calle Real Xalteva, Granada, Nicaragua
Read MoreShow Less

Get a comprehensive overview of Granada from the ground up on this 3-hour walking tour, including a ride on a horse-drawn carriage. Get views of the city from the top of the belltower at Iglesia La Merced, visit the Convent of San Francisco, and stop by La Casa de Los Tres Mundos, an art gallery and cultural academy. All entrance fees and round-trip hotel transportation are included.
...  More
From
$55.39
From
$55.39
Learn More

1
They are located in Lake Nicaragua, just southeast of the city of Granada in Nicaragua. The islets are a group of 365 small islands scattered about the Asese Peninsula. The islets of Granada are of volcanic origin, they were formed when the Mombacho volcano blew much of its cone into lake Nicaragua thousands of years ago, thereby creating the archipelago. Most of the islets are covered with vegetation and rich with birdlife. Many of the islets are occupied. Some are privately owned and hold homes or vacation houses. There are facilities for the residents and for tourists. Hotels and shops are established on some of the islets, and boating tours are available. The Boat Tour around Islets of Granada takes 1 hour approx. and after the boat tour you will enjoy a sightseeing of the city with your tour guide, some of the historical sites you will see are: La Pólvora Fortress, Churches and Central Park, this tour will be over around midday.
...  More
From
$70.00
Price varies by group size
From
$70.00
Price varies by group size
Learn More

Granada —with its rich history and vibrant architecture— has been charming travellers for centuries. On this full-day tour of Granada, you’ll visit the city’s historical highlights and learn about local culture from your guide. See highlights such as San Juan de Dios hospital and Fortaleza La Polvora during a horse-and-carriage ride; explore the city further on a walking tour; and conclude with a relaxing boat ride around Lake Nicaragua. On this small-group tour —limited to 15 people — you’ll receive personalized attention from your guide.
...  More
From
$87.00
From
$87.00
Learn More

3
Check off all of Granada's most popular attractions with this city tour and boat tour of Lake Nicaragua. During this 6-hour excursion, visit the colonial city's highlights in a horse drawn carriage, then head out on Lake Nicaragua to explore the more than 300 tiny islands. Hotel pickup and drop-off included.
...  More
From
$106.67
From
$106.67
Learn More

1
This is a tour in the oldest city in the Americas The tour will take place on foot to have a closer perception of the local culture and people. This tour is full of information about culture, gastronomy, architecture, history and more ... You will be all the time with a guide certified by INTUR which is the government department responsible for training national guides. Come and enjoy with us this lovely tour!
...  More
From
$35.00
From
$35.00
Learn More

Discover the history of the first European City mainland in Las Americas, named "Granada" in 1524 and today called "The Paris of Central America". Granada is historically one of Nicaragua's most important cities, economically and politically. It has a rich colonial heritage represented on its buildings and traditions.
...  More
From
$64.62
Price varies by group size
From
$64.62
Price varies by group size
Learn More

This Tour will show you one of the oldest cities in the Americas, its beautiful colonial structure, its rich culture and tradition, as well as a visit to the chocolate museum and a pleasant tour of the islets of Granada.
...  More
From
$51.29
From
$51.29
Learn More

54
Nicaragua Escapade is a Nicaraguan owned company that provides private guided tours where you will have a 100% local experience.
...  More
From
$65.39
From
$65.39
Learn More

Things to do near Granada