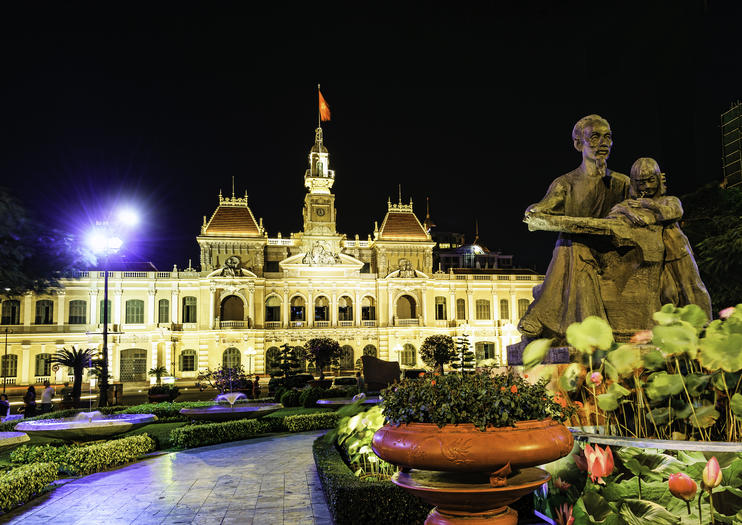 Dong Khoi Street (Đường Đồng Khởi), with its elite boutiques, French architecture, and trendy cafés, is the premier commercial center of the city and the place to see and be seen. Stores range from high-quality silk sellers to high-end luxury brands. City highlights such as Notre Dame Cathedral and the Central Post Office are both within easy walking distance.

The Basics
Due to Dong Khoi Street’s central location and proximity to many notable landmarks, most visitors to Ho Chi Minh City will find themselves there at some point during their stay. Many sightseeing tours of the city, especially walking tours, pass along the street while moving between places such as the Saigon Opera House, Notre Dame Cathedral, People’s Committee Building, and Ben Thanh Market. The street also makes a pleasant setting for an evening cyclo ride for the chance to see some of the architecture illuminated.

Things to Know Before You Go
How to Get There
Dong Khoi Street is within easy walking distance of many notable points of interest in Ho Chi Minh City. If you’re coming from farther afield, the 13, 58, and 60 buses all stop along the street.

When to Get There
Dong Khoi Street is well worth a couple of visits during your trip. Come during the day to stroll the shady sidewalks and enjoy the shopping and cafés, but plan to come back after dark when the illuminated French colonial architecture creates a romantic atmosphere.

What’s in a Name?
Dong Khoi Street has gone through several name changes in its history. It began as Rue Catinat during the French occupation of Vietnam, when it was the epicenter of European glamour in the city. During the Vietnam War, it was renamed Tu Do, or “Freedom Street,” and became the city’s red-light district. After the Communists took over Saigon, it was renamed Dong Khoi, which translates to “Total Revolution.”
Address: Dong Khoi Street, Ho Chi Minh City, Vietnam
Read MoreShow Less

Vietnam's largest city boasts energy travellers can feel the moment they step out onto the street. Discover the delights of lively Saigon with a friendly private guide from Vietravel. Get a local's perspective on this evocative Vietnamese metropolis as you explore Ho Chi Minh City at your own pace.
…More
From
$75.90
Price varies by group size
From
$75.90
Price varies by group size

Get to know Ho Chi Minh City better without the humid buses and crowded footpaths of a large group tour on this full-day introductory tour. Get around the city in your own private transport and get personalized attention from your own private guide as you explore city highlights like the War Remnants Museum, the Chinese quarter of Cholon and the colonial relics of Dong Khoi Street.
…More
From
$108.98
Price varies by group size
From
$108.98
Price varies by group size

Saigon by Night by Cyclo Ride and Dinner on cruise

4
Absorb the local atmosphere of Saigon’s city streets on a cyclo tour, followed by a dinner cruise on the Saigon River. Hop into a typical pedicab and ride past major landmarks of Ho Chi Minh City such as the Saigon Notre-Dame Cathedral. Then board your boat and admire the illuminated city skyline as you feast on delicious dishes. Includes hotel pickup and drop-off by private vehicle.
…More
From
$31.80
From
$31.80

I tailored this 5 hours Food Tour in Saigon for you to enjoy a wonderful evening in Saigon. One of the special thing about our Food Tour is that you will travel to non-tourist destinations and see the real life of local people. I will bring you to the most popular street stalls and hidden alleyways in the Saigon and show you where and which style the local Vietnamese love to eat! Save your appetite, delight your palate and let us fill your tummy with delicious and healthy authentic Vietnamese food! I will drive you by my scooters go through Districts 1, 3, 4, 10 to see local Vietnamese's activities at night time. You will have a chance to try more than 10 different kinds of food in Saigon, just hang on tight, keep calm and book my SAIGON ON BIKE FOODIE TOUR!
…More
From
$82.06
From
$82.06

Things to do near Ho Chi Minh City