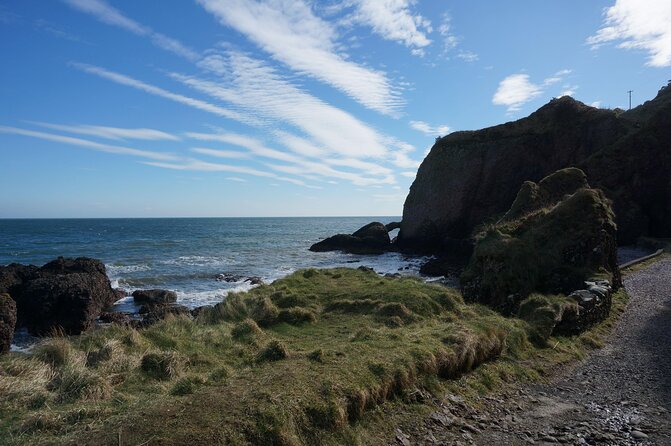 Celebrate your favorite moments from the hit book and TV seriesGame of Thrones as you transport yourself to the mythical lands of the Seven Kingdoms on a Northern Ireland film site tour. Here are some of the top small-screen sites you can visit.

Pretend you're part of House Stark for the day as you explore Castle Ward, an 18th-century mansion and historic farmyard. This picturesque estate has played the site for the Starks' Winterfell castle, the traditional center of power in Game of Thrones' Kingdom of the North. Most trips to Castle Ward depart as full-day excursions from Belfast.

Ballintoy Harbour as the Iron Islands

Join Theon Greyjoy and the Ironborn at Ballintoy Harbour, the traditionalGame of Thrones filming location for the Iron Islands. The site's rocky coastline and picturesque harbor create the perfect scenery for the home of this fictional seafaring community. Most trips to Ballintoy depart on full-day excursions from Belfast, but a multi-day visit from Dublin is another option

The picturesque caves just outside of Belfast served as the setting for the birth of priestess Melisandre's shadow baby in season two of the TV show. Visits to the site depart on full-day tours from Belfast, although multi-day trip options from Dublin are also available. Your tour may also take you to see Northern Ireland's Carrick-a-Rede Rope Bridge and UNESCO-listed Giant's Causeway, neither of which would look out of place in the fictional world of Westeros.

The picturesque tunnel of trees known as the Dark Hedges has become one of the most photographed sites in Northern Ireland. Stunning in bright sunlight, moody fog, and icy snowstorms, this site was featured in the TV show's second season as an escape route for Arya Stark as she departed King's Landing. The Dark Hedges are visited on some multi-day trips from Dublin and full-day excursions from Belfast.

Want to explore all of the Thrones' seven kingdoms? Other spectacular filming locations can be found in Iceland, Croatia, Spain, and Malta.

2 Tours and Activities | All Ireland Tours

Game of Thrones™ Filming Locations and Giant's Causeway from Dublin

754
Discover sites made famous in television’s 'Game of Thrones,' including the mighty Giant’s Causeway on this full-day tour from Dublin. Travel in comfort aboard an air-conditioned coach and listen as your guide fills you in on 'Game of Thrones' filming tales as you stop at the sites like Dark Hedges and the Antrim Coast. You also stop in Belfast, with ample free time to explore the Northern Ireland capital.
…More
From
$85.62
From
$85.62
Face masks required for travelers in public areas
Social distancing enforced throughout experience
Regularly sanitized high-traffic areas
Learn More
Taking safety measures

25
Marvel at iconic locations used to film Game of Thrones on a 2-day tour of Belfast and Giant’s Causeway from Dublin. After a scenic train ride along Ireland’s rugged Atlantic coast, explore Belfast independently with a hop-on hop-off bus ticket. With a guide, visit locations used to film the award-winning TV drama Game of Thrones, and gasp at mythical sites, such as the Cushenden Caves, the Dark Hedges, and the UNESCO-listed Giant’s Causeway. Overnight accommodation, breakfast, and round-trip train transport from Dublin is included.
…More
From
$449.46
Price varies by group size
From
$449.46
Price varies by group size
Face masks required for guides in public areas
Face masks provided for travelers
Hand sanitizer available to travelers and staff
Learn More
Taking safety measures