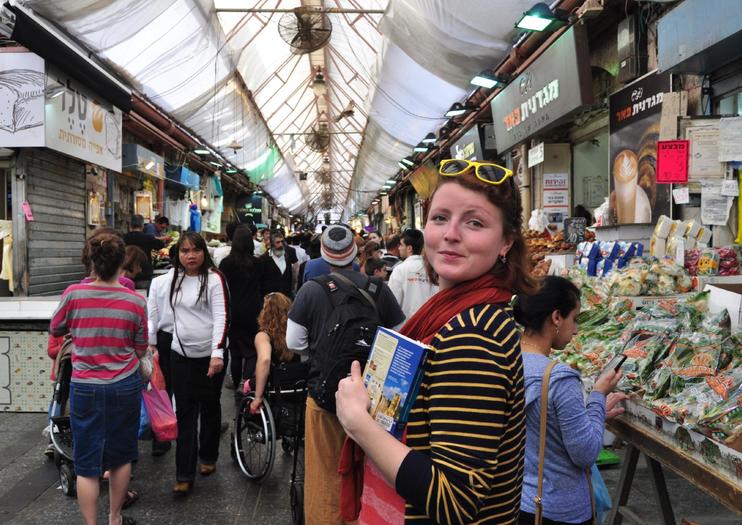 Bursting at the seams with produce, nuts, seeds, spices, wines, meats and cheeses, baked goods, fish, housewares and clothing, Mahane Yehuda Market, informally called The Shuk, teems with locals and tourists who come for a bargain or simply to take in the frenetic atmosphere.
The history of the market dates back to the Ottoman Period, when locals began selling produce there in the early 20th century. It soon expanded into an organized market thanks to its convenient, centralized location. The local government attempted to add much-needed infrastructure — proper sewage, running water and garbage disposal to start — to the market during the British Mandate period, but it wasn’t until the 1930s that conditions began to improve.
Hungry travelers will find plenty of street food stands in and around the Mahane Yehuda Market, including some of Jerusalem’s best burekas. The market also offers a Shuk Bites card, which includes a self-guided tour map of the market and vouchers for a variety of market products. Some write the name as Machane Yehuda Market.

15 Tours and Activities to Experience Mahane Yehuda Market (The Shuk)

Clear all
Apply
Select Dates
Today
Tomorrow
Price & Deals
$
$
Time
Time of DayDuration
Rating
More
Did you know?You can reserve your spot today and pay when you're ready.
Learn more
Did you know?
You can reserve your spot today and pay when you're ready.Learn more
Reserve Now & Pay Later
We'll reserve your spot today, and you can cancel up to two days* before your experience without making a payment. Secure your spot with ease, stay flexible, and never miss out.
How it works
Find your experience
Choose the experience you want knowing you can secure your spot without being locked in.
Make a reservation
Reserve now and pay later to secure your spot, commitment-free.
Choose when to pay
Come back to pay once your plans are set, or let auto-pay kick in two days* before your experience.
Enjoy your experience
Now you're all set! Have a great time.
Frequently Asked Questions  | Terms & Conditions
*Up to 9 days depending on the booking/product
Sort by:Featured
Featured
Traveler Rating
Price (Low to High)
Price (High to Low)
Duration (Short to Long)
Duration (Long to Short)
New on Viator

4
Taste your way through Jerusalem’s biggest outdoor market on a 3-hour, gourmet tour of Mahane Yehuda with a local guide. Have your lunch on the go as you visit a series of five market stalls for samples, and get an inside perspective on a foodie hotspot in the heart of Jerusalem.
...  More
From
$37.00
From
$37.00
Learn More

20
Explore Jerusalem’s Machane Yehuda market with the Bite Card — a culinary passport that takes in the most distinctive flavors of “The Shuk.” Follow a map of the market to sample rich sambusak and imaruly, savory pastries filled with spinach or cheese, and nibble aromatic Moroccan treats. Sip fresh juice, taste sizzling kebabs and sip fresh coffee with a locally-baked cookie. Discover the market at your own pace and immerse yourself in the scents and sights of Jerusalem’s most iconic market.
...  More
From
$32.83
From
$32.83
Learn More

5
Discover the best of Jerusalem in one day, seeing all the highlights of the golden city. A fully guided tour that will take you through the winding alleys of the ancient Old City and the newer neighborhoods outside of the walls. Start your day in the Old City, the heart and soul of ancient Jerusalem. Visit the Armenian, Christian, Arab, and Jewish neighborhoods and take in the unique atmosphere of a city holy to three religions. Visit the Western Wall and see the Temple Mount, explore the Church of the Holy Sepulchre, and walk part of Via Dolorosa as your guide shares the stories and the history of Jerusalem of old. Explore famous landmarks of the new city such as the Montefiore Windmill, The YMCA building, the majestic King David Hotel, and the Russian Compound. Walk down the pedestrian boulevard Nachalat Shiva and rub shoulders with the locals at the bustling Machane Yehuda market, the one place where past and present, secular and religious, local and traveler all come together.
...  More
From
$60.52
From
$60.52
Learn More
Reserve Now & Pay Later
We'll reserve your spot today, and you can cancel up to two days* before your experience without making a payment. Secure your spot with ease, stay flexible, and never miss out.
How it works
Find your experience
Choose the experience you want knowing you can secure your spot without being locked in.
Make a reservation
Reserve now and pay later to secure your spot, commitment-free.
Choose when to pay
Come back to pay once your plans are set, or let auto-pay kick in two days* before your experience.
Enjoy your experience
Now you're all set! Have a great time.
Frequently Asked Questions  | Terms & Conditions
*Up to 9 days depending on the booking/product
Reserve Now & Pay Later
Secure your must-do activities without being locked in
Learn More

5
The best way to experience the holy city of Jerusalem is with a private tour, which will allow you to understand its complexity, learn about its rich history, experience the archeology and feel the culture. I love guiding, I love Jerusalem and the land of Israel and nothing makes me happier than to share this love with others. I present very rich and informative guidance while presenting the information in a very vivid manner.
...  More
From
$835.90
per group
From
$835.90
per group
Learn More

Jerusalem from One End to the Other- By Rail

4
The Jerusalem light rail spans the city, connecting history, conflict, people and differing narratives. It is a wonderful way to learn about the many facets of this city. We begin on Mount Herzl, the fist stop. We will visit the national cemetery and gain an understanding of the history of Israel. We continue on the light rail, pointing out the sites on the way, exiting at the the colorful Machane Yehuda market which we will tour and sample the street food. We continue on the rail, stopping at the center of town, Jaffa Street and King George Avenue, to get a sense of this historical and bustling area. We continue to the Damascus Gate Station, to visit both a Jewish Ultra-Orthodox neighborhood and the neighboring hub of the Arab section of the city at the Damascus Gate and Salah a Din Street. Here we will get a deep sense of the complexities of this multicultural city. We continue to the Arab and Jewish northern neighborhoods, asking the question: What unites us? What divides us?
...  More
From
$312.31
per group
From
$312.31
per group
Learn More

Each participant receives a colorfully designed 5 x 5” Seek It booklet that includes 80 images and a full-color, detailed map of the winding streets of the neighborhood. The booklet is used throughout the game and then kept as a keepsake from the experience. The only other tools needed are a pen or pencil and one smartphone or camera per team for recording findings.
...  More
From
$30.77
From
$30.77
Learn More

3
So what is JRT exactly? Imagine it's 8 AM, Jerusalem is starting to wake up to another busy day and we're running around its magical paths, feeling the day at its starting point.. I'm Noam and I would like to take you to a tour quite different than the traditional one most tourist take in this spectacular city. Let me take you for a unique experience of living the city through your running, where you decide the route to take, at pace you choose.  Our starting end ending point will be at your hotel. On our way, you will get the chance to sense the "true" Jerusalem through your feet, feeling the authentic special vibe of the city. It will be exciting and fulfilling.. So let's RUN!
...  More
From
$87.18
From
$87.18
Learn More

Our best seller 10 nights Israel & Jordan tour. want to have a life-changing experience, visiting two of the ancient places in the world? want to explore where it all begun? this tour is for you: a full 10 days of sightseeing, exploring, tasting & absorbing the middle east atmosphere!
...  More
From
$2,390.00
From
$2,390.00
Learn More

Join our Jerusalem Day Tour for the easiest, most comprehensive, and best value way to discover this magical city. You will explore ancient Jerusalem’s Old City, as well as the modern, vibrant, metropolis of today. Starting in March 2020 this tour will be available every Sunday and Thursday with a Spanish speaking guide. Please note in your booking if you would like a Spanish guide when booking for these days
...  More
From
$59.00
From
$59.00
Learn More

Most guides will tell you the history of Jerusalem as fact. However, what facts are they giving you, and where are they getting them from? It is challenging to visit Jerusalem and be delivered an impassioned perspective or particular narrative. Rarely do you get to discover the differing approaches, grapple with the perplexing controversies, and decide for yourself in a city so loaded with contradicting stories and opinions. Come and see for yourself.
...  More
From
$650.00
per group
From
$650.00
per group
Learn More

This tour can be for any size group or combined with others. Not only do you get to experience the history of Jerusalem while making new friends, but also have drinks and food while doing so. You will be brought around by a local who has worked over 10 years in different bars around the city. Now as a licensed guide i can not only show you the hidden gems of history but enjoy the night life too!
...  More
From
$15.00
From
$15.00
Learn More