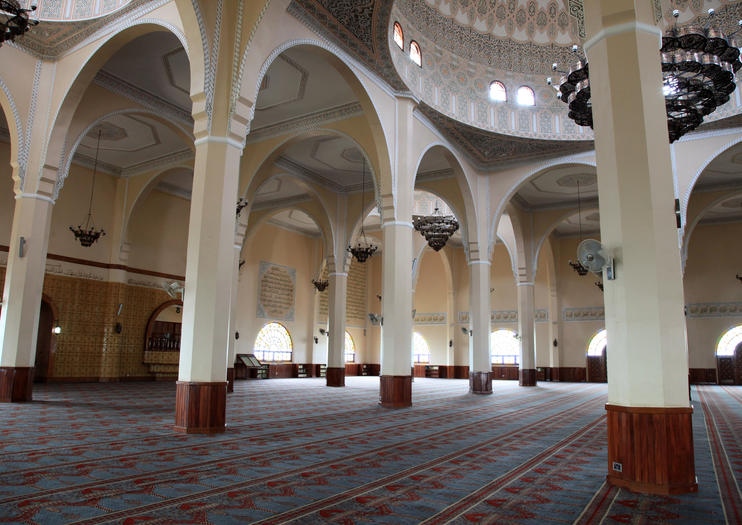 Located on Kampala Hill, the Uganda National Mosque caters to the country’s significant Muslim population and has a capacity of 35,000 worshippers. Completed in 2006, the temple was originally known as the Gaddafi National Mosque and serves as the headquarters for Islam in Uganda. Its 166-foot (65-meter) minaret provides panoramic views of the city.

The Basics
Several Kampala city tours include the cultural landmark as part of a wider sightseeing itinerary that features Nakasero Market and the Independence Monument; take advantage of excursions that offer round-trip transfers to travel between dispersed city attractions with ease. Explore the mosque with a guide for deeper insight into its unique history. An admission ticket to the mosque includes access to its towering minaret, which offers impressive views of the cityscape and beyond.

How to Get There
A convenient location on Old Kampala Road means that the mosque is easily accessible by matatu (public minibus), boda boda (taxi motorbike), or private transfer. If you’re travelling by public transport, head for the New Taxi Park station, which is just a few minutes’ walk away.

When to Get There
On Islamic holidays such as Eid and Ramadan, the mosque is known to fill to its full capacity, so it’s best to avoid sightseeing then. Call to prayer times differ throughout the year, though it’s well worth coinciding your visit to hear the atmospheric adhan.

The Gaddafi Connection
The first attempt to build a national mosque was begun under Amin in 1972, but construction was abandoned four years later. In 2002, building work began again, funded by the Libyan government. Gaddafi himself opened the completed temple in 2008, just three years before his death. In 2013, the mosque was renamed in recognition of the new Libyan government.
Address: Old Kampala Road, Kampala, Uganda
Read MoreShow Less

28
This is the only package that will bring you close to the real daily mood of Kampala City! It will give you a chance to interact with some city hustlers, it has all what you would desire to see in any city like culture, entertainment, religion, business, transport systems, and sightseeing “If not this one then what else would you do really”?
…More
From
$51.29
From
$51.29
Face masks required for travelers in public areas
Face masks required for guides in public areas
Hand sanitizer available to travelers and staff
Learn More
Taking safety measures

This tour is organized for that traveller who has less time to stay in the City and or the traveller who needs a quick tour around Kampala City for a short and memorable experience.
…More
From
$28.00
From
$28.00

The largest city in Uganda, Kampala can present itself as chaotic sprawl to first-time visitors. Touring the city with a guide helps you cut through the noise and get to the city’s core. Visit top Kampala sites like the Nakasero Market, Independence Monument, Gaddafi National Mosque, and more along with a guide who tells you about the sites as you pass.
…More
From
$307.70
From
$307.70

Kampala city tours is offering the best sightseeing tours in Kampala, Uganda. Enjoy a full day guided tour visiting popular cultural & religious tourist sites around Kampala. A good way to explore what the city has to offer especially if you only have limited time available while in the country.
…More
From
$153.85
From
$153.85

2
Kampala, the capital of Uganda is the heartbeat of the nation. Almost all trade and commerce happen here. The majority of institutions and organizations have their offices in Kampala. The population is 6 million by day and 1.5 million at night. Our slogan is organized chaos. Thousands of lawless minivans and bodabodas make up our public transportation. Every minute in or on them is like being in an action movie. However, despite the frenzy and all the features of a third world economy, the people are so friendly, we are so rich in culture, it is so easy to get around and fit in, our food has a lot of variety, and most of it is effortlessly organic. The weather is also awesome almost all year round. At Venture Out, we are storytellers. What makes our tour unique is the way we go deep into history to tell how things came about and their impact on us today such that it all comes together for the guest in a way that clicks so they can appreciate Kampala better.
…More
From
$72.65
From
$72.65

This trip in kampala will give a chance every one who decides to be served an opportunity to buy African crafts at a lower price, Taste local dishes,visit religious sites,visit historical sites all in kampala.
…More
From
$43.59
From
$43.59

We show our clients all corners of kampala city including slums (gettos) and give them a chance to test our traditional local food.
…More
From
$60.00
From
$60.00

This tour is adventure bringing as we tour the main sites of Uganda's Capital City, Kampala and its slums.
…More
From
$44.00
From
$44.00

This tour is unique because travellers will get to appreciate the rich religious culture of Uganda. They shall learn about how missionaries brought Christianity to Uganda and how Islam was introduced to Uganda.
…More
From
$256.42
From
$256.42
Face masks required for travelers in public areas
Face masks required for guides in public areas
Face masks provided for travelers
Learn More
Taking safety measures

1
This half day tour follows in the footsteps of the TV show-Amazing Race and visits the same locations as the show while sampling Ugandan food along the way. Our knowledgable tour guide will accompany you on this tour. You'll experience the best view of Kampala when you climb the stairs of a mosque minaret tower, then we drive to the City's largest market, which is the size of nearly 20 football fields. There you will sample delicious snacks such as the Rolex and Ugandan Egg-roll. After that, we take a drive through Kampala's outer neighborhoods to visit the nearby shores of Lake Victoria to see the boat makers, fish auction house and processing. The tour finishes with a feast of fried fish and chips. Transportation, food and drinks are included in tour price. You will be picked up and dropped off at your accommodations in the Kampala area.
…More
From
$102.57
Price varies by group size
From
$102.57
Price varies by group size

with this product package we offer free Wifi onboard, the traveler is entitled to tailor the itenary and he/she can make extesion of extra activities at the end of the prescribed activities.
…More
From
$205.13
From
$205.13

The boda boda is Uganda's most common and popular mode of travel. There's no better way to truly visit and get around the capital, than by taking a thrilling boda ride. Explore five of Uganda's most iconic attractions and discover Uganda's history and culture. The tour also provides an opportunity to taste both local street food and a generous spread of Ugandan staple foods for lunch.
…More
From
$100.00
Price varies by group size
From
$100.00
Price varies by group size
Face masks required for travelers in public areas
Face masks required for guides in public areas
Temperature checks for travelers upon arrival
Learn More
Taking safety measures

Kampala has plenty of things to do such as touring the Uganda museum which is the oldest museum found in East Africa, the heritage Center's like the kabaka’s palace, Kasubi tombs which are the burial grounds of Buganda kings, kabaka’s lake which is the old man-made lake in Africa, art galleries and craft markets along Buganda road, browsing the stalls of the chaotic Owino market not forgetting the local foods and yummy Rolex!, wandering the leafy streets of the affluent Nakasero market. Wonderfully made religious centers, the Rubaga and Namirembe cathedrals, and the Ghaddafi mosque which has a 90 angle view of the Kampala city and the only Bahai temple on continent. Well, all different cultures of more than 49 ethnic groups we have in Uganda can be experienced at Ndere troupe Centre.
…More
From
$347.70
From
$347.70
Face masks required for travelers in public areas
Face masks required for guides in public areas
Hand sanitizer available to travelers and staff
Learn More
Taking safety measures

Kampala City, generally known as the city of seven hills, is the capital city of Uganda, center of commercial life and the seat of government including the Parliament and historical monuments. The City alone offers cultural lovers lots of opportunities to appreciate the country cultural diversity. Kampala city tour will give you the opportunity to traverse the major landmarks in this humble city to experience the historical monuments that have shaped the destiny of this great nation. The tour gives you an understanding of the Kampala City folk lifestyle, the unique behaviors of Ugandan people, the culture, the traditions and history.
…More
From
$205.13
From
$205.13

1
This tour offers travelers with a detailed insight into the culture and lifestyles of Ugandans & taking you to the most iconic historical sites of the City. Your guides will narrate it all for you & at the end you will become a Kampala expert. This is the best option to taste a local meal at a local restaurant & is a great opportunity to explore some of Uganda's traditional cuisines. Do not forget to taste the Nile beer and the popular rolex sandwich (chapatti, eggs, cabbage, tomatoes, onions combined)
…More
From
$135.39
Price varies by group size
From
$135.39
Price varies by group size
Face masks required for travelers in public areas
Face masks required for guides in public areas
Face masks provided for travelers
Learn More
Taking safety measures

A tour around Kampala is so rewarding in that you get to learn about some of the people, history and culture of Ugandans. The tour takes you to different places around the city which gives you more than what words can. You get to visit the place and see what actually is there.
…More
From
$150.00
From
$150.00

The Kampala tour makes you know more about Uganda the pearl of Africa at large and get the everlasting memories.It will be the evidence to people that you visited Uganda.The informative and experienced guides will make your tour un forgettable.
…More
From
$30.00
From
$30.00

Things to do near Kampala