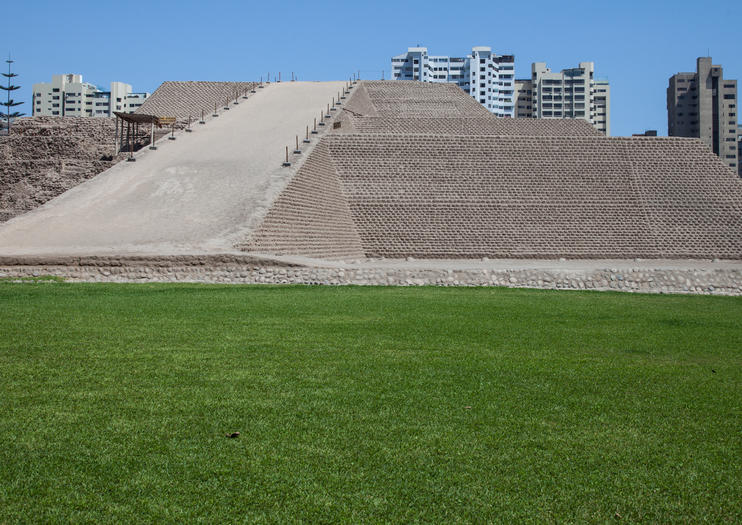 The pre-Columbian adobe Huaca Huallamarca pyramid is a startling sight, rising among the modern high-rises of Lima’s San Isidro district. Also known as Pan de Azucar (Sugar Loaf) after the rounded farmlands that once covered the ruins, the pyramid served as a burial temple for the Lima Culture, who lived here circa 200–500.

The Basics
Before exploring the restored complex, visit the on-site museum, which displays items excavated from the site including pots from the Lima and Nievería, funerary masks, musical instruments, weaving equipment, and mummies. An exhibition is dedicated to Peruvian archaeologist Arturo Jimenez Borja, credited with saving the site from destruction but controversial for the changes he introduced.

Many private and small-group half-day tours that stop at Huaca Huallamarca include Huaca Pucllana, a pre-Columbian site in Miraflores, and the Larco Museum, with an extensive collection of pre-Columbian artifacts. Other tours journey through the downtown area (a UNESCO World Heritage Site) and take in sweeping views of the city from the tower at the Convent of Santo Domingo, followed by a three-course Peruvian fusion meal.

How to Get There
Huaca Huallamarca is at the corner of Nicolás de Ribera and Avenida El Rosario in the center of Lima’s San Isidro financial district, easily accessible by taxi as well as by bus. Lines 1701, 201, and 209 stop nearby.

When to Get There
Huaca Huallamarca is open year-round, Tuesday through Sunday, 9am–5pm. Go in the early morning to beat the crowds. In general, the best time to visit Lima is wintertime (May–September), when there is the least amount of rain, especially important if planning a trip to Cusco or trek to Machu Picchu. The summer months (December–March) are warmer, but wetter, and in Lima especially, quite foggy.

Who Were the Lima Culture?
The Lima Culture, also known as the Maranga, inhabited the area of present-day Lima from about 100 to 650. As their timing overlaps with several nearby civilizations, such as the Paracas, Moche, and Nazca peoples, their history is a bit obscured. However, they are known for interlocking patterns in ceramic artwork and for constructing the first channels from the Rimac River irrigating the coastal desert plains—engineering feats that still exist today.
Address: Corner of Av. El Rosario and Av. Nicolas de Rivera 201, San Isidro, Lima, Peru
Read MoreShow Less

Considered the best museum in this part of the world, has a vast collection of pre-Columbian ceramics, artifacts made of gold and silver, textiles and silverware. This is a fascinating way to discover the history of Peru and to understand the development of the many cultures before the Inca Empire. We will explain you the significance and importance of the objects this museum has. Larco Museum is definitely Lima's Nr. 1 attraction and cannot be missed at any visit to the Peruvian capital city. Bookable now but it will be operated from March 2021
…More
From
$39.90
Price varies by group size
From
$39.90
Price varies by group size
Face masks required for travelers in public areas
Face masks required for guides in public areas
Hand sanitizer available to travelers and staff
Learn More
Taking safety measures

3
Get a new perspective on Lima as you explore the Peruvian capital’s ancient ruins and historic museums after dark during this 4-hour excursion. Head to Lima’s Huaca Pucllana, a pre-Columbian archaeological site constructed around 1,500 years ago. Then check out Huaca Huallamarca, an adobe pyramid that pre-dates the Incas. You’ll also have time to admire the wealth of gold and silver artifacts the Larco Museum before finishing your evening with a dinner of Peruvian specialties at Café del Museo. Your nighttime excursion also includes round-trip hotel transport by coach, bottled water, a 3-course dinner and all entrance fees.
…More
From
$93.67
From
$93.67
Face masks required for travelers in public areas
Face masks required for guides in public areas
Hand sanitizer available to travelers and staff
Learn More
Taking safety measures

1
The modern city of Lima is dotted with historic ruins and sacred sites, known as huacas, and the imposing archeological site of Huaca Pucllana is one of the city’s largest and most important ancient monuments, located in the coastal Miraflores district. Built around 500 A.D, the complex was once an administrative and ceremonial center of the indigenous Lima Culture civilization, constructed from hand-made adobe bricks and dominated by a 22-meter tall central pyramid. - Visit with us 3 of the largest and most impressive Huacas that Lima has. - Walking and knowing each one of its secrets. - Huaca Puccllana, Huaca Huallamarca and Pachacámac.
…More
From
$57.00
From
$57.00

Huallacmarca Pyramid & Larco Museum - Footprints of the past

1
Come and get to learn about the pre-incas culture of Peru! Visit an outstanding pyramid built by the year 200 a.c and get to the top the learn with our guide about the offerings given to our native gods. We also include the visit to the local museum where art pieces found in the pyramid are exhibited. Then, we go towards the best museum in Peru and one of the 25 top museums in the whole world. Larco Museum with its more than 35,000 ceramics awaits for you to show you all the magic and knowledge of our ancient cultures!
…More
From
$82.06
Price varies by group size
From
$82.06
Price varies by group size

This is a specialized tour for people who enjoy ancient history, the enigmas and the beauty of the pre inca art. The Amano Museum was recently reorganized with an exellent distribution and presentaion. It is not turistic yet...
…More
From
$70.84
From
$70.84

We discover Olive Park of San Isidro enjoying the Marina Núñez House sculptures exhibited outdoors. We enter to the exclusive art Gallery Índigo to know more about Peruvian modern crafts and we will ride by a beautiful Mural of an Amazonian artist Rember Yahuarcani.
…More
From
$49.04
From
$49.04

Enjoy with us an impressive tour of the beautiful "Millenary Lima". Visiting one of the most representative huacas of Miraflores. And also the beautiful Historical Center of Lima
…More
From
$52.00
From
$52.00

Visit with us the Larco Museum and the historical center of Lima, both are considered main attractions in Peru. In Downtown we will show you the most representative sites such as San Martin Square, Plaza de Armas, the Cathedral, The City Hall, the Presidential Palace and other stunning buildings. Also, you will visit the impressive Larco museum, considered the best one in south America. Learn from your expert guide the fascinating history of Peru’s capital. Bookable now but it will be operated from March 2021
…More
From
$81.95
Price varies by group size
From
$81.95
Price varies by group size
Face masks required for travelers in public areas
Face masks required for guides in public areas
Hand sanitizer available to travelers and staff
Learn More
Taking safety measures

Travel and explore with us the spectacular Peruvian attractions with our one-week Tour Package Lima, Sacred Valley & Machu Picchu. This package is perfect for a short vacation in Peru, and it will show you the essentials. Also, you will have free time, with different options to choose between full-day or half-day tours.
…More
From
$1,266.00
Price varies by group size
From
$1,266.00
Price varies by group size
Face masks required for travelers in public areas
Face masks required for guides in public areas
Hand sanitizer available to travelers and staff
Learn More
Taking safety measures