Welcome to Viator!
By creating an account, you agree to our Terms & Conditions and Privacy Policy.
We're creating your account. This may take a few seconds...
Account creation successful! Thank you.
Something went wrong. Please try again on the sign up page.
Questions? (888) 651-9785(888) 651-9785
When are you traveling?
Select Dates
Recommendations
All Recommendations
Ways to Beat the Crowds in Munich
Culture Lover’s Guide to Munich
Sightseeing on a Budget in Munich
Art Lover’s Guide to Munich
Where to Find the Best Views in Munich
Top Day Trips from Munich
Don't Miss These Must-Do Activities in Munich
Guide to Munich's Oktoberfest
Price
$0
$500+
Duration
Time of Day
RatingClear
Specials 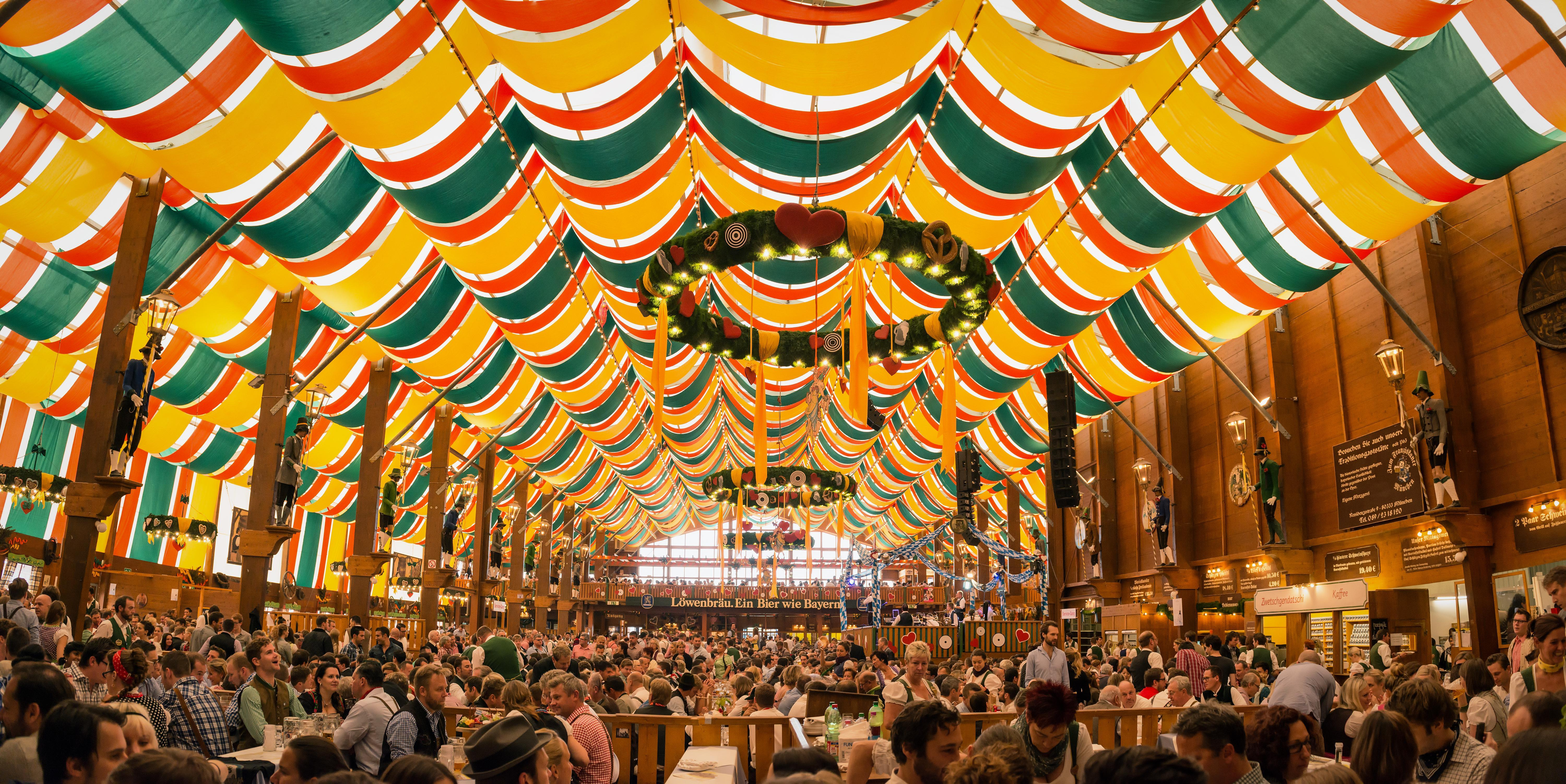 Oktoberfest is by far the largest beer festival in the world, attracting more than 7 million visitors to Munich every year to enjoy the liquid gold. The 16-day event's temporary sparkling city of 34 vast beer tents, fairground attractions, music and specially brewed beer served in Masskrüge (one-liter) mugs certainly makes for a memorable experience.

Thanks to the 16th-century Bavarian Beer Purity Law still in place today, Oktoberfest guests are guaranteed the highest quality Bavarian brews at the event. All beer served is from one of Munich's Big Six breweries: Augustiner, Löwenbräu, Paulaner, Spaten, Hofbräu and Hacker-Pschorr. About 6.9 million liters of beer are consumed over the course of the festival (that's enough to fill 43,000 bathtubs), and it should be noted that Oktoberfest beer has a higher alcohol content than other varieties. In addition the beer, traditional Bavarian food is also served, including Hendl, salt-roasted chicken, and Dampfnudl, sweet dumplings served with vanilla sauce. Also, the drinking age in Germany? 16.

Oktoberfest is known as one giant, joyous party, with Bavarian Blasmusik (brass band music) played in every tent, each of which has its own personality. The 10,000-person Hofbräu-Festzelt tent is an especially festive area, where it's possible meet travelers from all around the world in addition to plenty of Germans—85% of attendees arrive at Oktoberfest from Bavaria and other parts of Germany. Travelers can enjoy what locals call Gemütlichkeit—a friendliness, comfortable coziness and relaxed appreciation for the old-fashioned good things in life. In addition to participating in the colorful Bavarian triathlon of eating, drinking and singing, guests can also wander the 103-acre grounds and take a ride on the carousel or see the Wiesn faigrounds from the top of the Ferris wheel.

Given the event's enormous popularity, it's best to book tickets in advance and reserve a table in one of the major tents. Tickets can be combined with a tour of the Oktoberfest grounds, a Segway tour around Munich or a historical beer festival walking tour. It's even possible for those traveling in Austria to book an Oktoberfest experience that begins with transport from Salzburg to Munich.

7 Tours and Activities | All Munich Tours

799
Get a dose of Bavaria's iconic beer culture with this food and beer tour in Munich. Home of Oktoberfest and a collection of famous beer halls and beer gardens, Bavaria's beautiful capital invites visitors from around the globe with its promise of fun and camaraderie. Partner with a savvy guide for an insider look at this tradition of imbibing. You’ll hit local haunts and enjoy Bavarian nibbles in the company of fellow beer aficionados.
…More
From
$51.82
From
$51.82
Hand sanitizer available to travelers and staff
Social distancing enforced throughout experience
Regularly sanitized high-traffic areas
Learn More
Taking safety measures

7
Munich is the unofficial beer capital of the world, home to the legendary Oktoberfest as well as hundreds of beer halls, gardens and cellars. Get a taste of Bavarian beer culture at its very best on this private, 3.5-hour walking tour, led by your own personal guide. Immerse yourself in the convivial atmosphere at a local beer hall; sip a stein at the renowned Hofbräuhaus; and learn about the techniques used to make Bavarian brew at the Beer and Oktoberfest Museum. Receive one-to-one attention from your private guide throughout.
…More
From
$241.00
Price varies by group size
From
$241.00
Price varies by group size
Hand sanitizer available to travelers and staff
Social distancing enforced throughout experience
Regularly sanitized high-traffic areas
Learn More
Taking safety measures

157
Experience Munich's famous beer culture on an Oktoberfest tour and guaranteed seating in the festival’s biggest Hofbräu tent. Get an insider look at this world-famous event with your savvy guide, starting with a narrated walk through the festival grounds and a spin on the Ferris wheel. Then grab your seat in the lively Hofbräu-Festzelt tent and soak up the raucous festival culture while indulging in twp liters of beer and a half a roast chicken—all included!
…More
From
$192.80
From
$192.80
Hand sanitizer available to travelers and staff
Social distancing enforced throughout experience
Regularly sanitized high-traffic areas
Learn More
Taking safety measures

60
Enjoy Oktoberfest in Munich during this full-day experience that includes a Munich city tour and a guaranteed spot inside a tent. Beginning with a walking tour, learn about the city’s history and brewing customs, and hear about the 200-year-old festival at Theresienwiese. Then, take a seat at your reserved place in one of the major Oktoberfest beer tents, where you receive two liters of beer and chicken.
…More
From
$192.80
From
$192.80

35
While visiting Munich for Oktoberfest, or to experience its popular beer culture any time of the year, take this guided, 3-hour, behind-the-scenes brewery tour. Visit several Munich breweries to see their beer-making facilities, including the fermenting tanks and malting towers. Meet master brewers and learn about the history of brewing lager. Then enjoy a fresh Bavarian pretzel with a glass of beer.
…More
From
$34.95
From
$34.95
Face masks required for travelers in public areas
Face masks required for guides in public areas
Face masks provided for travelers
Learn More
Taking safety measures

Experience the world's largest beer festival with this overnight camping trip at Munich's Oktoberfest. Begin with hearty breakfast at your campsite in the morning before heading over to the festival with a guide. Sing centuries-old drinking songs, wander the beer tents, try Bavarian dishes and then head back to your campsite in the evening for Stoketoberfest, the after-party. Enjoy barbecue, live bands, more beer and carnivalesque celebrations with 2,500 or more international guests every night.
…More
From
$174.73
From
$174.73

See Munich and its famous Oktoberfest grounds with your very own private guide, and spend more time seeing the sights that interest you most. The itinerary is flexible, so where you go and what you see is up to you. After leaving Salzburg, wander the streets of Munich Old Town or visit Allianz Arena, the city’s soccer stadium. Sup a beer in the legendary Hofbräuhaus am Platzl before heading to the beloved Oktoberfest site, where beer lovers flock each year.  Entrance fees are payable on the day.
…More
From
$1,024.25
per group
From
$1,024.25
per group
Hand sanitizer available to travelers and staff
Social distancing enforced throughout experience
Regularly sanitized high-traffic areas
Learn More
Taking safety measures