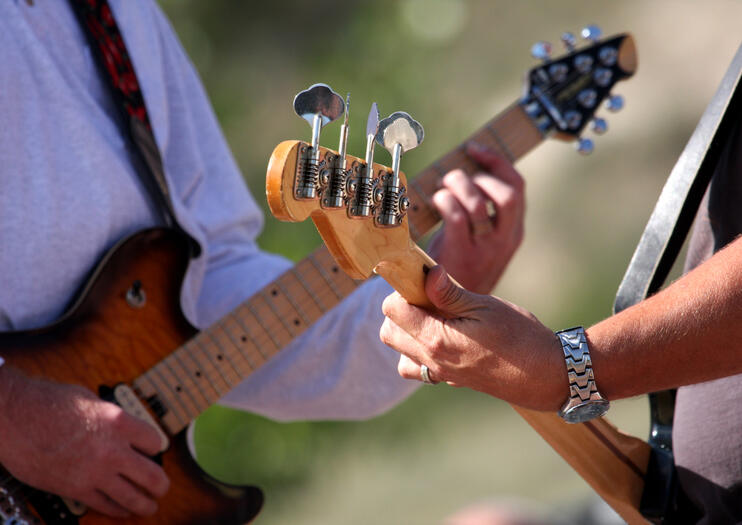 Overview
Set against the picturesque backdrop of Newport Harbor and Narragansett Bay, Fort Adams State Park is a popular recreation area for swimming, sailing, fishing, and field games. The park also has a historic character thanks to sprawling Fort Adams, and is the home of major music festivals each summer.

The Basics
The largest coastal fortification in the United States, Fort Adams served as a home to soldiers from 1824 to 1950. Today, visitors to the state park can explore the grounds on a guided tour of the officers’ quarters, defensive walls, overlooks, and tunnels. The Museum of Yachting is housed nearby inside a 19th-century stone barracks.

The Fort Adams Bay Walk, a 2.5-mile (4-kilometer) loop around the park, offers stellar views of the East Passage of Narragansett Bay and the downtown waterfront, as well as one of Newport’s best sunset views toward Conanicut Island. Most guided tours of Newport, including self-guided audio tours and day trips from Boston, include a visit to Fort Adams.

Things to Know Before You Go
How to Get There
Fort Adams State Park is located at the mouth of Newport Harbor, on the northern end of the peninsula east of Bellevue Avenue. Plentiful free parking is available. The park is also accessible by ferry from Jamestown and Providence.

When to Get There
The park is open daily throughout the year from sunrise to sunset. Guided tours take place regularly throughout the summer months (Memorial Day through October) and on weekends during the rest of the year.

Music Festivals at Fort Adams State Park
While this popular state park is of historical significance, it’s perhaps more famous for its summer concert events. Some of music’s most legendary acts have graced the stages of the annual Newport Folk Festival (held each year in late July or early August) and the Newport Jazz Festival, which has hosted the biggest names in jazz and blues since 1954.
Address: Fort Adams State Park, Newport, RI 02840, USA
Read MoreShow Less

78
Escape the hustle of the city and get away to the tranquility of Newport, Rhode Island, on a guided, small-group day tour from Boston. This quaint coastal town, known as America’s First Resort, is the perfect getaway and just 70 miles south of Beantown. Explore the Breakers mansion, the most grandiose of Newport’s summer mansions. Visit attractions like the Ocean Drive Historic District, the St Mary’s Church complex and the U.S. Naval War College, among others. Hotel pickup and drop-off plus a snack, guidebook and discount offer card are included.
...  More
From
$102.02
$113.36
$11.34 savings
From
$102.02
$113.36
$11.34 savings
Learn More

649
Take in Rhode Island’s scenic shoreline on a scenic sightseeing cruise through Newport Harbor and Narragansett Bay. Aboard an open-air, fully restored lobster boat, enjoy a narrated tour as you pass Newport and Jamestown harbor fronts, and see landmarks like Fort Adams, Newport Bridge, and the famous Clingstone house. Your afternoon trip includes a Rhode Island-styled refreshment, as well as a cash bar.
...  More
From
$26.00
From
$26.00
Learn More

8
Explore Newport, RI with a scenic self-driving tour! See everything this seaside town has to offer at your own pace. Start at the Visitor Center and drive down Bellevue Avenue, the "most beautiful avenue in the world". See and learn about the gorgeous Gilded Age Mansions along the way - including The Breakers, Marble House, The Elms, Rosecliff, Château-sur-mer, and more. Continue along Ocean Drive, which features breathtaking vistas, celebrity homes, and historic sites. This self-guided tour allows you to explore beautiful Newport with maximum flexibility and value. Recommended: Purchase one tour per vehicle. Everyone can listen at the same time! Within 30 mins, we'll send you a unique password and an app. Download the app onto your phone and enter the password. Download the tour inside. When you reach there, drive to the Discover Newport Visitor Center. Once there, launch the app and simply follow the instructions! Use our the map route and speed limit for the best experience.
...  More
From
$7.00
From
$7.00
Learn More

Explore all of Newport, RI! Experience the iconic Cliff Walk, which winds past famous Gilded Age mansions like The Breakers and Marble House. Then hop into your car and drive down Bellevue Avenue and around Ocean Drive. Learn about the mansions, Newport's historic past, and iconic American millionaires like the Vanderbilts and Astors. This combo package offers the best value for those looking to get the most out of their trip to Newport, Rhode Island. This self-guided audio tour allows you to explore Newport’s historic wonders with maximum flexibility and value. ----- Recommended: Purchase one tour per vehicle. Everyone can listen at the same time! ----- We’ll email or text you your unique password within 30 minutes after you book the tour. All audios play automatically based on location.
...  More
From
$10.00
From
$10.00
Learn More

61
Experience an unforgettable nautical adventure and take home second-to-none bragging rights with this 2-hour Newport cruise. Sail aboard an actual America's Cup 12-meter yacht, which navigates you past top attractions including the New York Yacht Club, Newport Pell Bridge, the Rose Island Lighthouse and Fort Adams. No prior experience is necessary — try your hand at sailing, or simply hang back and enjoy the ride. Expert crew will ensure a safe and enjoyable time on the water.
...  More
From
$98.00
From
$98.00
Learn More

Things to do near Newport