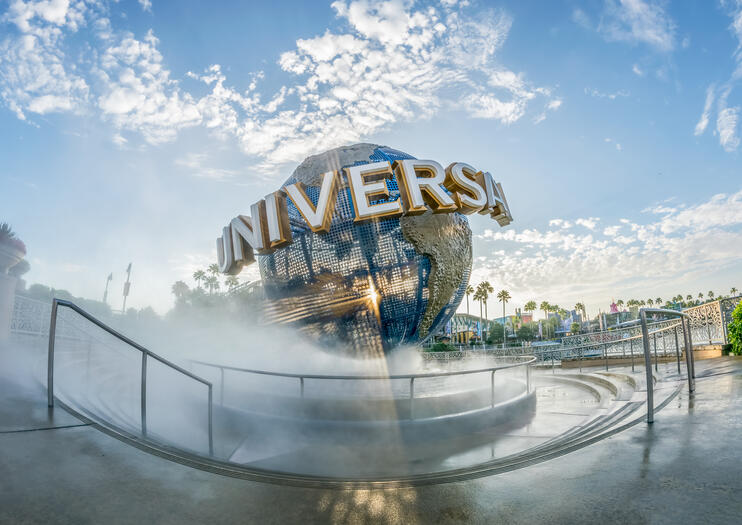 Universal Orlando Resort™ combines three of Orlando’s top theme parks with dining and entertainment options, all in one convenient location. Heroes and villains from blockbuster movies and TV shows—Harry Potter, Transformers, The Simpsons, and Marvel to name a few—come alive at Universal Studios Florida™ and Universal’s Islands of Adventure™, and park-goers can cool off from the Florida heat at the third theme park: Universal’s Volcano Bay™ water park.
The Basics
Home to some of the world’s most popular amusement parks, Universal Orlando Resort rivals Disney in popularity, with visiting families often spending multiple days enjoying the park’s attractions. Choose single or multi-day ticket options that include admission to a single park per day, or a park-to-park ticket that allows for admission into both Universal Studios Florida and Universal’s Islands of Adventure. Upgrade your vacation with tickets to the popular Blue Man Group show at Universal CityWalk™ or with a Universal Express Pass, which offers skip-the-line access at major rides and attractions.
Things to Know Before You Go
How to Get There
The nearest airport to Universal Orlando Resort is Orlando International. The park is located off I-4, and the route to the main parking garage is well-signed. Guests can choose general, prime, or valet parking upon arrival.
When to Get There
As the Theme Park Capital of the World, Orlando’s attractions get very busy during summer and winter holidays, as well as spring break. To avoid the biggest crowds, visit later in the week between Labor Day and Thanksgiving, from late November to mid-December, or during the weeks leading up to school spring breaks. Universal Studios Florida is a better rainy day option, as most of the attractions are indoors.
If You Can Only Visit One Park
If you’re pressed for time and can only visit one of the Universal Orlando parks, there are a couple of things to take into consideration when making your decision. First and foremost is the type of attractions on offer, given that Universal’s Islands of Adventure caters to the adrenaline junkie crowd, and nearly all of its major rides come with height restrictions. Families with younger kids will find much more to do at Universal Studios Florida. The Wizarding World of Harry Potter™ is spread across both parks, with Diagon Alley™ in one and Hogsmeade™ in the other.
HARRY POTTER characters, names and related indicia are © & ™ Warner Bros. Entertainment Inc. Harry Potter Publishing Rights © JKR. (s18)
*Additional Restrictions Apply. © 2018 MARVEL. Jurassic Park TM Universal Studios/Amblin. © 2018 BMP. Universal elements and all related indicia TM & © 2018 Universal Studios. All rights reserved.
Address: 6000 Universal Studios Plaza, Orlando 32819, USA
Hours: Open daily at 9 a.m., closing times vary
Read MoreShow Less

The answers provided below are based on answers previously given by the tour provider to customers’ questions.
Q:
What are Universal Orlando Resort hours of operation?
A:
Universal Orlando Resort hours of operation: Open daily at 9 a.m., closing times vary. Buy tickets in advance on Viator. If you book with Viator, you can cancel at least 24 hours before the start date of your tour for a full refund.

Things to do near Orlando