How to Spend 1 Day in Palermo 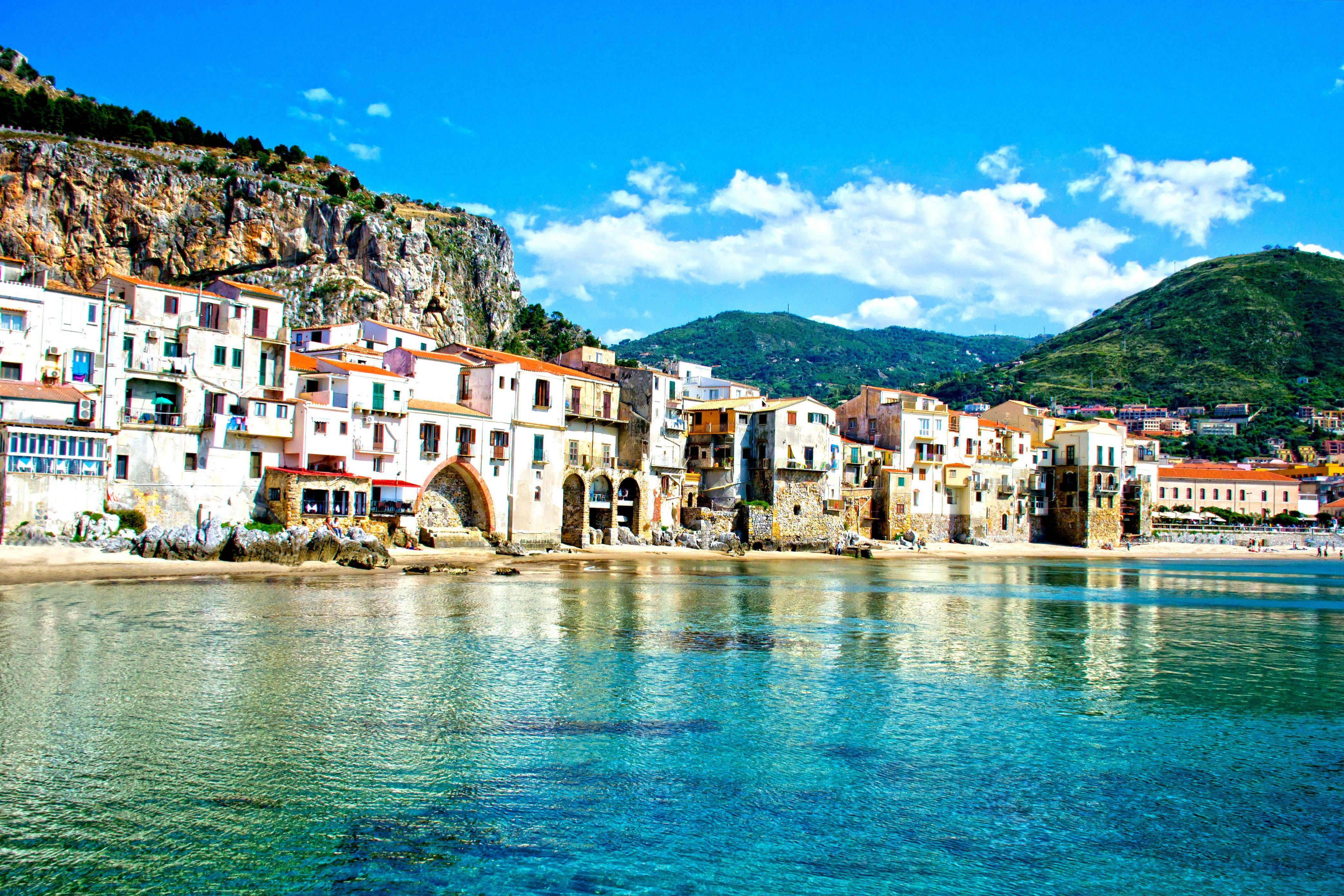 Sicily’s unique history has molded its culture, cuisine, and even language to be worlds apart from mainland Italy. No city illustrates this better than Palermo, with its mix of Norman, Moorish, and baroque architecture; bazaar-like street markets; and Arab-influenced dialect and dishes. Here’s how to experience the city in just one day.

Begin exploring in Palermo’s old town and join a walking, bike, or Segway tour to marvel at the historic center’s architecture, much of it part of the Arab-Norman monuments dating from the 12th century and listed as a UNESCO World Heritage Site. Admire the Byzantine mosaics in the Royal Palace and Palatine Chapel, Palermo Cathedral, and La Martorana, as well as the baroque Four Corners (Quattro Canti) square, the Renaissance “fountain of shame” in Piazza Pretoria, and the neoclassical Teatro Massimo. Gourmands can opt for a food and market tour that leavens the city’s architecture with its street food, stopping at the outdoor markets for tastings.

Afternoon: Adventures in the Kitchen or Countryside

Food is a fundamental pillar of Palermo’s culture, so take a deep dive into its cuisine with a local cooking class. Shop for ingredients at a traditional open-air market, and then learn the secrets of preparing dishes that blend Spanish, Greek, and Arab elements before feasting on the food you’ve made, paired with Sicilian wines. Alternatively, set off from Palermo to take in the architectural treasures in the surrounding towns, namely the imposing UNESCO-listed Norman cathedrals of Monreale or Cefalù, both exquisitely decorated in Byzantine mosaics and considered among Sicily’s most important cultural treasures.

Palermo is Sicily’s version of the “city that never sleeps,” with a lively nightlife that stretches from the outdoor markets and their popular street food stands to the trendy restaurants and clubs in neighborhoods like Lo Capo, Castellammare, and Albergaria. Stroll along the waterfront in La Marina to rub elbows with the locals during the evening “passeggiata” walk, relax over a sampling of Sicilian wine paired with artisan cheeses, or sit down to a traditional home-cooked meal with a local cook featuring classics like panzerotti, pasta alla norma, and crostata.

10 Tours and Activities | All Palermo Tours

705
Snack your way through the streets of Palermo on this Sicilian food tour. Explore backstreet markets and food stalls specializing in local delicacies like stuffed rice balls and chickpea fritters as your guide fills you in on local history, culture. Plus, this small-group tour has a limited number of participants for a more personalized experience.
…More
From
$60.45
Price varies by group size
From
$60.45
Price varies by group size
Face masks required for travelers in public areas
Face masks required for guides in public areas
Hand sanitizer available to travelers and staff
Learn More
Taking safety measures

22
Discover two of Palermo’s most distinctive landmarks on this immersive, private tour. Set off from your accommodation—hotel pickup and drop-off are included—and venture first to the Capuchin Catacombs: a macabre destination home to thousands of mummified bodies, many of them priests. Next, discover the UNESCO-listed Cathedral of Monreale, famous for its fusion of Norman and Arabic architecture. A break for Sicilian coffee and nibbles is also included.
…More
From
$109.54
Price varies by group size
From
$109.54
Price varies by group size

76
Capital of Sicily, Palermo is a city of rich history and impressive architecture—with hidden secrets round every corner. On this bike tour, hop onto the saddle, escape the tourist trail with your guide, and see sides of Palermo many visitors miss. Spin along peaceful back-streets and through pretty squares, sample Sicilian street food, and experience life in Palermo away from the hustle and bustle of the tourist traps.
…More
From
$53.55
Price varies by group size
From
$53.55
Price varies by group size
Hand sanitizer available to travelers and staff
Social distancing enforced throughout experience
Gear/equipment sanitized between use
Learn More
Taking safety measures

34
Discover the unique flavors and influences of Sicilian cuisine with a 5-hour, hands-on cooking class in Palermo. After shopping for fresh, seasonal ingredients at a local farmers’ market, head to a well-equipped home kitchen in an 18th-century building. Under the guidance of a chef instructor, learn to prepare an authentic 4-course meal of classic Sicilian dishes including dessert. Sit down to savor your freshly made creations paired with local wine.
…More
From
$182.57
Price varies by group size
From
$182.57
Price varies by group size

94
See the highlights of Palermo with a hop-on hop-off bus tour, exploring at your own pace. Get a view of the city’s top attractions from the top of a double-decker bus, including sights like the Quattro Canti, Vucciria Market and the Teatro Massimo – one of Italy's most famous opera houses. Enjoy audio commentary during the tour.
…More
From
$24.34
From
$24.34

5
Treat your taste buds to the delicate flavors of Sicily’s finest wines and cheeses with a gourmet tasting experience in Palermo. Soak up the ambiance of a historic, 17th-century building while sampling a hand-picked selection of six Sicilian wines paired with regional artisan cheeses. While you sip and nibble, learn about the island’s wine appellations and traditional cheese-making processes from a knowledgeable foodie guide.
…More
From
$125.01
Price varies by group size
From
$125.01
Price varies by group size

30
Say arrivaderci for the day to Taormina and spend some time in Palermo and Cefalù on this intriguing guided day trip. Discover the unique architecture, influenced by the Normans and the Arabs, and learn about the long and interesting history of both places. With your expert local guide, stroll the streets of both cities, taking in the Il Capo market in Palermo and the main cathedral in Cefalù.
…More
From
$66.94
From
$66.94
Face masks required for travelers in public areas
Face masks required for guides in public areas
Hand sanitizer available to travelers and staff
Learn More
Taking safety measures

Authentic Sicilian dinner with a local chef in Palermo

2
Experience fine-dining in the ancient city of Palermo. Meet your local chef and begin a 3-course immersion in authentic Sicilian cuisine. Eat a delicious dinner that may include fresh olives, local cheeses, bruschetta, pasta with melenzane, sarde, or Sicilian cauliflower, and grilled Mediterranean fish. For dessert, savor Crostata cake, coffee, and other delicious treats. Enjoy Italian wine and a vegetarian option with fresh local vegetables upon request.
…More
From
$71.81
From
$71.81

9
Forget your feet and abandon the automobile, the best way to see Palermo is via Segway. Smoothly cruise around town upright and on two wheels with your expert guide going from legendary landmark to spectacular site, and stopping at each spot to learn about its history. Head through the bustling Capo Market where some of the best street food in Sicily is sold, pass by the Gallery of Modern Art and discover the rich architectural heritage of a town that has been strongly influenced through the centuries by everyone from the Arabs to the Vikings.
…More
From
$120.49
Price varies by group size
From
$120.49
Price varies by group size
Hand sanitizer available to travelers and staff
Social distancing enforced throughout experience
Gear/equipment sanitized between use
Learn More
Taking safety measures

9
Spend a day exploring the best of Palermo and the glories of Monreale with this combination day trip. See the top attractions in the old town of the Sicilian capital of Palermo, including the Teatro Massimo, Cathedral, and Politeama Theater. Next, travel up to the hilltop town of Monreale to tour the famous Duomo. Marvel at the golden mosaics covering the Duomo's interior.
…More
From
$65.80
From
$65.80