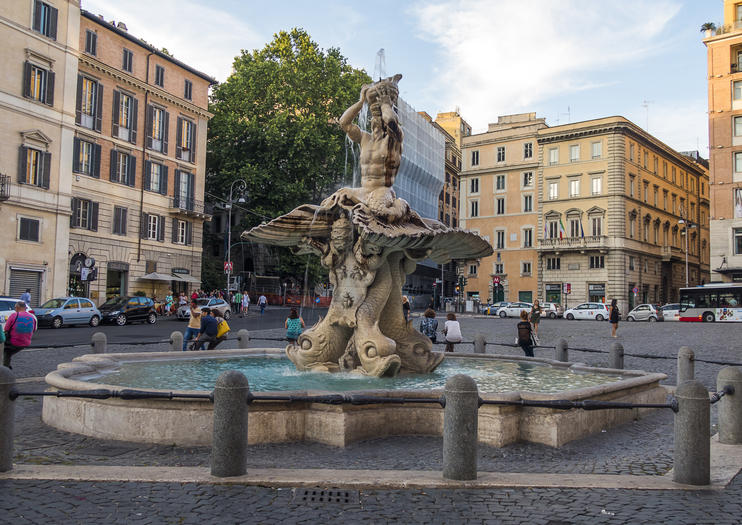 The Triton Fountain (Fontana del Tritone) is not on the scale of Rome’s most famous water feature, the Trevi Fountain, but it’s well worth a visit. Located in bustling Piazza Barberini, Fontana del Tritone was commissioned by Pope Urban VIII and carved by Gian Lorenzo Bernini, whose baroque sculptures also appear in St. Peter’s Basilica.

The Basics
Poised outside the stately Palazzo Barberini, Fontana del Tritone was commissioned by Pope Urban VIII, Bernini’s patron, to provide water sourced from the Acqua Felice aqueduct. Built in 1643, it was the first of Bernini’s freestanding fountains. The sculpture features the mythical figure of Triton, who balances on seashells and blows a conch: a reference to Ovid’s Metamorphoses in which Triton causes a great flood to recede.

When to Get There
Busy by day and illuminated at night, the Fontana del Tritone can be admired any time. To pair a visit to the fountain with a tour of the adjacent Palazzo Barberini, however, check the normal opening hours for the Galleria Nazionale Antica, which is housed in the palazzo, and visit when the gallery is open.

185
Peel back the layers of Roman history—quite literally—with a thrilling exploration of its underground tombs and chapels. Visit Roman Catacombs, home to stunning frescoes and thousands of centuries-old bones. Learn about early Christianity from your guide while meandering the endless darkened tunnels. Next up is the Capuchin Crypt, where you find the artistically displayed bones of 4,000 Capuchin monks.
…More
From
$78.65
From
$78.65
Face masks required for travelers in public areas
Face masks required for guides in public areas
Face masks provided for travelers
Learn More
Taking safety measures

Rome Walking Tour Including the Pantheon and Trevi Fountain

143
Discover Rome's layers of history during a short walking tour of its key sites. With a guide, check out visitor favorites such as the Trevi Fountain, Pantheon, and Piazza Navona, along with lively art-filled squares like Piazza Barberini. Hear the stories behind the landmarks as you stroll and pose for photos along the way. The morning tour ends a short walk away from the Vatican, making it a perfect choice if you plan to explore the Vatican later on your own.
…More
From
$3.62
Price varies by group size
From
$3.62
Price varies by group size
Social distancing enforced throughout experience
Learn More
Taking safety measures

21
Follow in the steps of character Robert Langdon in "Angels and Demons" on this downloadable quest. Walk around Rome, solving games and clues to unlock the next destination, revealed on your smartphone. You and your group can immerse yourself in Langdon's story as well as the history of Rome, moving at your own pace and taking as long as you like.
…More
From
$6.34
$9.06
$2.72 savings
Price varies by group size
From
$6.34
$9.06
$2.72 savings
Price varies by group size
Social distancing enforced throughout experience
Regular temperature checks for staff
Paid stay-at-home policy for staff with symptoms
Learn More
Taking safety measures

Join this free promotional walking tour and visit Rome's most famous and important Baroque landmarks: Barberini square, the Pantheon, Bernini's Elephant, Navona square, Four Rivers Fountains, Coronari street and many more landmarks of Rome. Please keep in your mind that it is a free promotional tour and it is necessary that you tip the tour guide.
…More
From
$6.04
From
$6.04

Vicus Caprarius - the City of Water

See the structures of an imperial era "domus", the "castellum aquae" of the Vergine Aqueduct and many fascinating finds, including the famous face of Alessandro helios. On a journey back in time, it will be possible to touch the millennial stratification of Rome and observe the archaeological evidence of the great events that characterized the history of the city. After the visit to the City of Water, you will return to the Trevi Fountain, the great baroque masterpiece, to continue your journey to Triton Fountain, carved by the notable Gian Lorenzo Bernini. Going on toward Piazza Mignanelli you will notice one of the characteristic public fountains of Rome known as Nasone. Then you will reach the Spanish Step and the Barcaccia Fountain. Strolling on Via del Babuino you will see one of the six statues of Rome representing Silenus, nicknamed by Romans “babbuino” which means baboon. At the end, you will reach Via Margutta where you can admire the Fountain of Arts.
…More
From
$127.05
From
$127.05
Face masks required for travelers in public areas
Face masks required for guides in public areas
Hand sanitizer available to travelers and staff
Learn More
Taking safety measures

TOUR HIGHLIGHTS • Learn and explore the art, architecture, history Baroque buildings and imperial monuments of the Eternal City’s most famous sites. • Learn the secrets behind each monument, square, and piece of art with the help of the professional guide. • Discover some of the most stunning squares, fountains in Rome and the myths of tossing a coin and making a wish. - Join an amazing three-hour journey through the most famous Roman squares and streets with an informative, friendly, and engaging guide. Walk along the streets to discover and see the Spanish Steps, Piazza Navona, Piazza Venezia, Trevi Fountain, and many other stunning fountains, squares and main attractions of Rome.
…More
From
$83.30
From
$83.30
Face masks required for travelers in public areas
Face masks required for guides in public areas
Hand sanitizer available to travelers and staff
Learn More
Taking safety measures

2
Learn about the artwork and architecture of Gian Lorenzo Bernini during this private tour in Rome. Follow in the artist’s footsteps during a walking tour that includes visits to major landmarks including Piazza Barberini, Piazza del Popolo, and the Basilica of Sant’Andrea. See Bernini’s sculptures, fountains, and architectural plans.
…More
From
$205.70
Price varies by group size
From
$205.70
Price varies by group size
Face masks required for travelers in public areas
Face masks required for guides in public areas
Social distancing enforced throughout experience
Learn More
Taking safety measures

3
Explore an illuminated Eternal City on this evening tour of Rome by golf cart. Enjoy the magical atmosphere of the city’s piazzas, fountains and historical sights lit up after dark, from the Church of San Carlo alle Quattro Fontane to Piazza Barberini to the Spanish Steps. You’ll learn interesting things about the city from a knowledgeable guide, who shares information about Rome’s art and history.
…More
From
$529.39
per group
From
$529.39
per group
Face masks required for travelers in public areas
Face masks required for guides in public areas
Hand sanitizer available to travelers and staff
Learn More
Taking safety measures

Driving around Rome by night tour

2
Discover the top sights of Rome efficiently and at your own pace with a special hop-on hop-off bus pass. Save potentially hours of vacation time with skip-the-line tickets at the Colosseum and Vatican Museums. Use the bus’ scenic and comprehensive route to reach the city’s most popular monuments. Learn about the many landmarks you pass with a complimentary audio guide in your native language.
…More
From
$125.53
From
$125.53