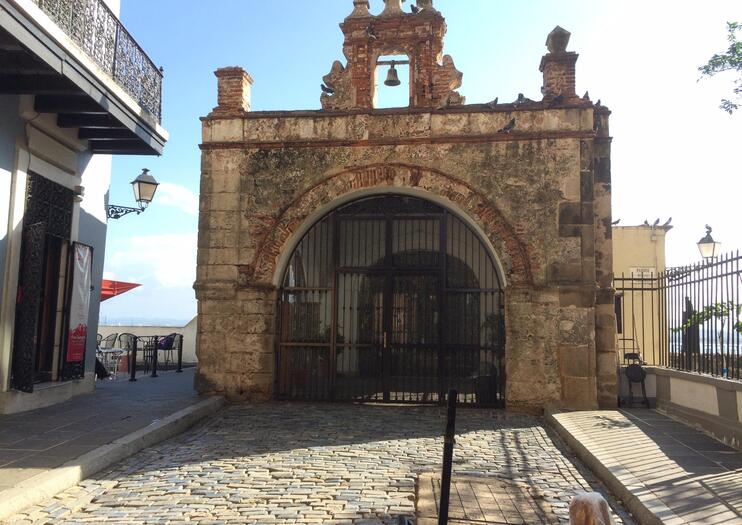 The Chapel of Christ (Capilla del Cristo) is a small, 18th-century sanctuary tucked away at the end of a pedestrian street in a corner of the old walled city of San Juan. Built to commemorate what believers say was a miracle, the chapel has become a place to pray and leave offerings, which decorate the walls.

The Basics
The sanctuary was built in honor of a rider who lost control of his horse along Calle del Cristo during a fiesta. Plunging off the top of the stone wall onto the cliffs below, the rider was said to have miraculously survived. Over the years, faithful Puerto Ricans have flocked to the chapel to pray for miracle cures and leave milagros, tiny silver charms representing parts of the body, at its altar.

Today, the chapel is a well-known yet humble historical landmark. Its gold-and-silver altar can be seen through the glass doors of the old building, but most visitors have to settle for a view from outside, as the chapel is only open to the public once a week. Since it is located within Old San Juan, the historic colonial section of the city, there are numerous ways to visit the church, including on half-day sightseeing tours, walking tours, and Segway tours.

How to Get There
Located on Calle del Cristo, just a short walk from San Juan Cathedral, Capilla del Cristo is easily accessible by foot from other Old San Juan attractions. Because of traffic congestion and the city’s narrow, one-way streets, travelers recommend walking to the chapel rather than arriving by taxi or bus. Old San Juan also offers free hop-on hop-off trams to major attractions.

When to Get There
Although you can stop by Capilla del Cristo at any time, there is a locked iron gate at the entrance; the interior of the chapel is only open on Tuesday afternoons and religious holidays. The winter season, from December to early April, draws the most tourists to Puerto Rico, so expect bigger crowds then, especially around Christmas.

1866
Get a taste for the flavor and culture of Puerto Rico on this small-group Old San Juan food tour featuring several local eateries. Join your guide for a culinary exploration of island staples like plantains and sofrito, all with the cobblestone streets and colorful facades of the city’s oldest neighborhood as your backdrop. Your tour includes an alcoholic beverage or non-alcoholic substitute if you prefer.
…More
From
$125.00
From
$125.00
Face masks required for travelers in public areas
Face masks required for guides in public areas
Hand sanitizer available to travelers and staff
Learn More
Taking safety measures

509
Explore the colorful buildings and charming streets of Old San Juan in a small group with the help of writer David Rodriguez, author of ‘The Rise and Fall of the Great Barbate.’ During the course of your day, the knowledgeable author helps you discover the area’s key historic sites and gain new insight into Puerto Rican culture. It’s a great opportunity to learn about the many stories of the people who helped to define this unique neighborhood. Your walking trip’s length is flexible based on your needs, and also includes bottled water.
…More
From
$41.03
From
$41.03
Face masks required for travelers in public areas
Face masks required for guides in public areas
Hand sanitizer available to travelers and staff
Learn More
Taking safety measures

10
Travelers who want to stay forever young will love this fountain of youth tour of Old San Juan. Learn about the colonial Gilded Age and discover the stories and history of Ponce de Leon's city and people. Listen in as your friendly guide shares stories about riots and revolutions and find out why the colony was known as "Gold Island". Wander through burial sites where greats like Ponce de Leon and other founding fathers of Puerto Rico are buried and get an up close look at history, culture and traditions that define this destination.
…More
From
$46.16
From
$46.16
Face masks required for travelers in public areas
Face masks required for guides in public areas
Hand sanitizer available to travelers and staff
Learn More
Taking safety measures