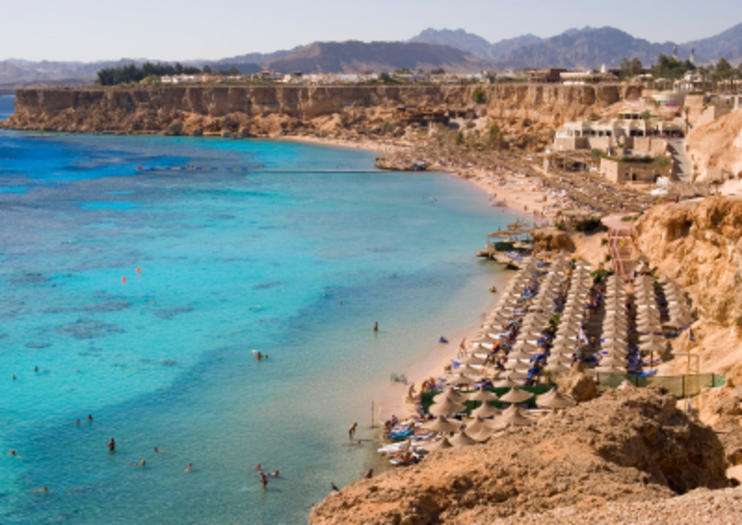 A resort town in Egypt’s Sinai Peninsula, Sharm el Sheikh offers snorkeling, diving, and desert trips. It is also close to the UNESCO World Heritage Site of St. Catherine’s Monastery. Ships dock at the in-town Sharm el Sheikh Port (rather than at a dedicated cruise port), and you may need to tender if another ship is docked.

The Basics
Sharm’s main charms lie beneath the crystal clear waters of the Red Sea. Take to the water at Ras Mohammed National Park, a protected marine area; Tiran Island, which offers a dramatic reef; or at the wreck of the SS Thistlegorm, a World War II–era cargo ship with holds full of motorbikes (which can be explored by scuba divers with advanced certification). Alternatively you can enjoy the desert: Hike through White Canyon and Colored Canyon, brave an all-terrain vehicle adventure or a camel ride, or immerse in bedouin culture at a traditional camp. If you have time, head to St. Catherine’s Monastery, founded in the sixth century, often combined with Mt. Sinai, where Moses is said to have received the Ten Commandments.

How to Get to Sharm el Sheikh from Sharm el Sheikh Cruise Port
Whether you’re tendering or docking in port, Sharm el Sheikh’s international harbor is just minutes from the city center. Most shore excursions and private tours include round-trip transportation—fortunate, as local public transport is informal and hard to access unless you speak Arabic.

Port Information
Egyptians in Sharm el Sheikh (and elsewhere) speak Egyptian Arabic. Local signs are written in both English and Arabic, as are street names. The local currency is the Egyptian pound, and both ATMs and money changers are readily available. If you arrive in Egypt via cruise ship for a planned excursion, your ship will take care of the visa formalities.
Address: Sharm el Sheikh, Egypt
Read MoreShow Less

Things to do near Sharm el Sheikh