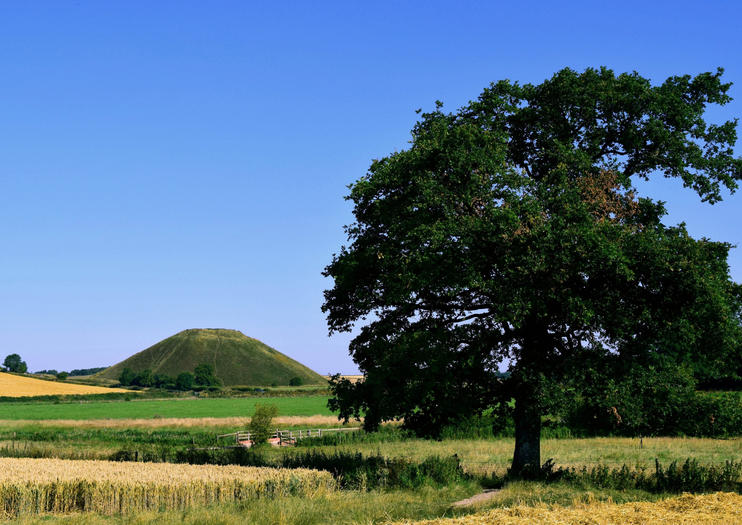 Looming 30 meters (98 feet) over the Avebury countryside, the steep grassy slopes of Silbury Hill are an incongruous sight against the backdrop of gently rolling farmlands. This is no ordinary hill, however – the fascinating man-made structure dates back to around 2400BC and is the largest prehistoric monument of its kind in Europe.
Experts have long debated the significance of Silbury Hill, but while there are few indications of its actual purpose, its size (comparable to the Egyptian pyramids) and careful construction are none-the-less impressive. The mysterious hill also makes an intriguing addition to England’s UNESCO-listed Neolithic monuments, which include the Avebury Ring, the West Kennet Long Barrow and Stonehenge.

34
The prehistoric stone circles at Stonehenge and Avebury attract admiration and intrigue in equal measure, drawing curious visitors from across the world—but visiting independently means missing out on their hidden significance. On this half- or full-day tour, explore Stonehenge and Avebury as your guide shares the many theories on their origins. Visit lesser-known nearby sites many visitors miss, with pickup and drop-off in towns within the local area included.
...  More
From
$298.27
per group
$331.42
$33.15 savings
From
$298.27
per group
$331.42
$33.15 savings
Learn More

Salisbury, Stonehenge, and Avebury in One Day from Salisbury

5
Pack in more of south England’s attractions in less time on a full-day tour from Salisbury. Perfect for history buffs, the excursion visits the medieval Salisbury Cathedral, home to the iconic Magna Carta, and Stonehenge, UNESCO World Heritage Site and one of England’s most famous landmarks. See, too, the Neolithic stone circles of Avebury and the prehistoric Silbury Hill. Upgrade to include hotel pickup and drop-off.
...  More
From
$247.24
Price varies by group size
From
$247.24
Price varies by group size
Learn More

Stonehenge, Avebury, and West Kennet Long Barrow in One Day from Salisbury

6
Visit all of England’s UNESCO-listed Neolithic monuments in one day on a full-day tour from Salisbury. Designed to delight travelers interested in history, this tour covers the mysterious Neolithic stone circles of Stonehenge and Avebury, Silbury Hill burial mound, and West Kennet Long Barrow, all UNESCO World Heritage sites. Hotel pickup and drop-off are included.
...  More
From
$281.81
Price varies by group size
From
$281.81
Price varies by group size
Learn More

Head beyond London city limits, and visit several of England’s most important historical landmarks, on this private, full-day tour. Depart in the morning from your hotel, and trade the city streets for pretty countryside. You’ll visit Stonehenge and Avebury: the ancient, Neolithic stone circles are both UNESCO World Heritage sites. Next, you’ll discover Silbury Hill and the West Kennet Long Barrow. If preferred, stop for lunch en route at a tranquil, country pub (additional expense).
...  More
From
$364.18
Price varies by group size
From
$364.18
Price varies by group size
Learn More

2
Exploring the prehistoric sites around Bath is difficult in a day without resorting to a hire car. This private tour delivers: covering three sights in a single morning and afternoon. Admire England’s rolling countryside as you leave Bath for the world’s largest neolithic stone circle at Avebury, and stroll among its ancient stones. Then, continue to see the West Kennet Long Barrow tomb before visiting Stonehenge and making your return.
...  More
From
$305.72
Price varies by group size
From
$305.72
Price varies by group size
Learn More

Things to do near South West England