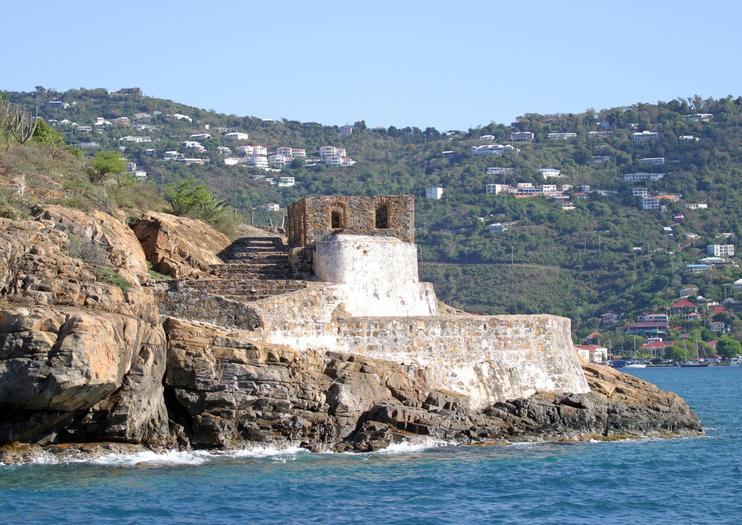 Please note: Official tours to Hassel Island have been temporarily halted due to damages incurred during hurricanes Maria and Irma.
Located on the western edge of St Thomas’ harbor, Hassel Island was once part of a peninsula. But the Danish government decided that separating it from St Thomas would create better water circulation in the harbor, so in the 1860s Hassel Island was born. The U.S. Army Corps of Engineers widened the channel again in 1919, further separating the island from St Thomas.
Today, it is primarily a national park and a popular spot with visitors to St Thomas. Hassel Island is best explored via a kayaking, hiking or snorkeling tour, all of which give visitors a combination of a history lesson and an eco-adventure. And although it is primarily governed as a national park, there are several private estates on the remaining land, including a 10-acre compound with three houses totaling 15,000 square feet.
The historic district encompasses the entire island and includes ruins from early 19th-century English fortifications and 19th-century shipping and coal stations. Important ruins of note include Shipley’s Battery (Fort Shipley), a key reminder of Britain’s presence and rule during the Napoleonic Wars in the early 1800s, and the Creques Marin Railway remains, built in the 1860s.
Hassel Island was home to a U.S. naval station from 1917 until 1932, when the island was purchased by a family to provide water for its distilleries. By the 1940s, the family owned 125 of the 135 acres and was receiving (and turning down) hefty offers from Korea and Germany to purchase the island. It was ultimately sold to the Virgin Islands National Park in 1978, preserving it for visitors today.

Insect repellent is heavily advised at Hassel Island and throughout the Caribbean. The island is open year-round to the public and is located south of Charlotte Amalie in St Thomas, from where visitors must arrange for water transportation. Overnight camping and fires are prohibited.
Address: St Thomas, US Virgin Islands
Read MoreShow Less

5
Benefit from personalized attention and a flexible itinerary on this charter boat trip in the US Virgin Islands. You and your party of up to six people can choose what you'd like to do: visit some secluded beaches, hit up local party bars, go in search of turtles, or swim and snorkel. You can choose the day and time to fit your schedule, making this a completely customizable outing.
...  More
From
$929.00
per group
From
$929.00
per group
Learn More