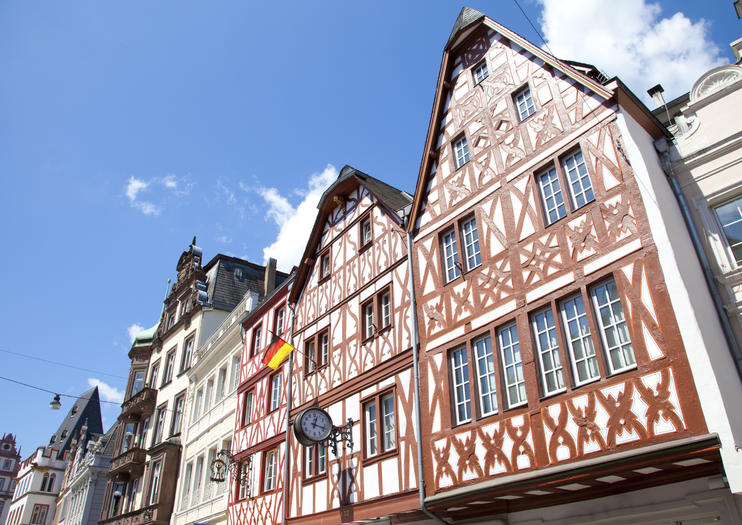 The Hauptmarkt in Trier, Germany is the city's main square, and it is located near the Liebfrauenkirche and St. Peter's Cathedral. The square is marked by a stone cross that dates back to 958, although the one you see today is a replica as the original has been moved into the City Museum. This is the center of the city's commercial activity, and you will find an abundance of stores where you can go shopping as well as cafes and restaurants to grab a meal. Several pedestrian streets connect with the square, making it the perfect area to go for a stroll while exploring the history of the oldest city in Germany.

A statue of St. Peter forms part of the market fountain dating back to 1595. He is surrounded by the four cardinal virtues of Justice, Strength, Temperance, and Wisdom, as well as monsters and monkeys. On one side of the market is the entrance to the old Jewish quarter of the city. This square also played an important role in the struggle between the two churches during medieval times. In December you'll find Christmas markets set up in this square.

The Hauptmarkt is located near the Liebfrauenkirche and is intersected by Simeonstrasse.

10
The riverfront town of Trier is renowned for its ancient Roman ruins, historic churches, and UNESCO-listed monuments. On this walking tour, explore Trier’s medieval Old Town; the city’s most atmospheric and picturesque district. Admire the striking half-timbered buildings; visit landmarks including Trier Cathedral, the Electoral Palace, and St. Gangolf's Church; and discover UNESCO-listed ruins such as Constantine’s throne room and Porta Nigra gate.
...  More
From
$15.00
From
$15.00
Learn More

Things to do near Trier