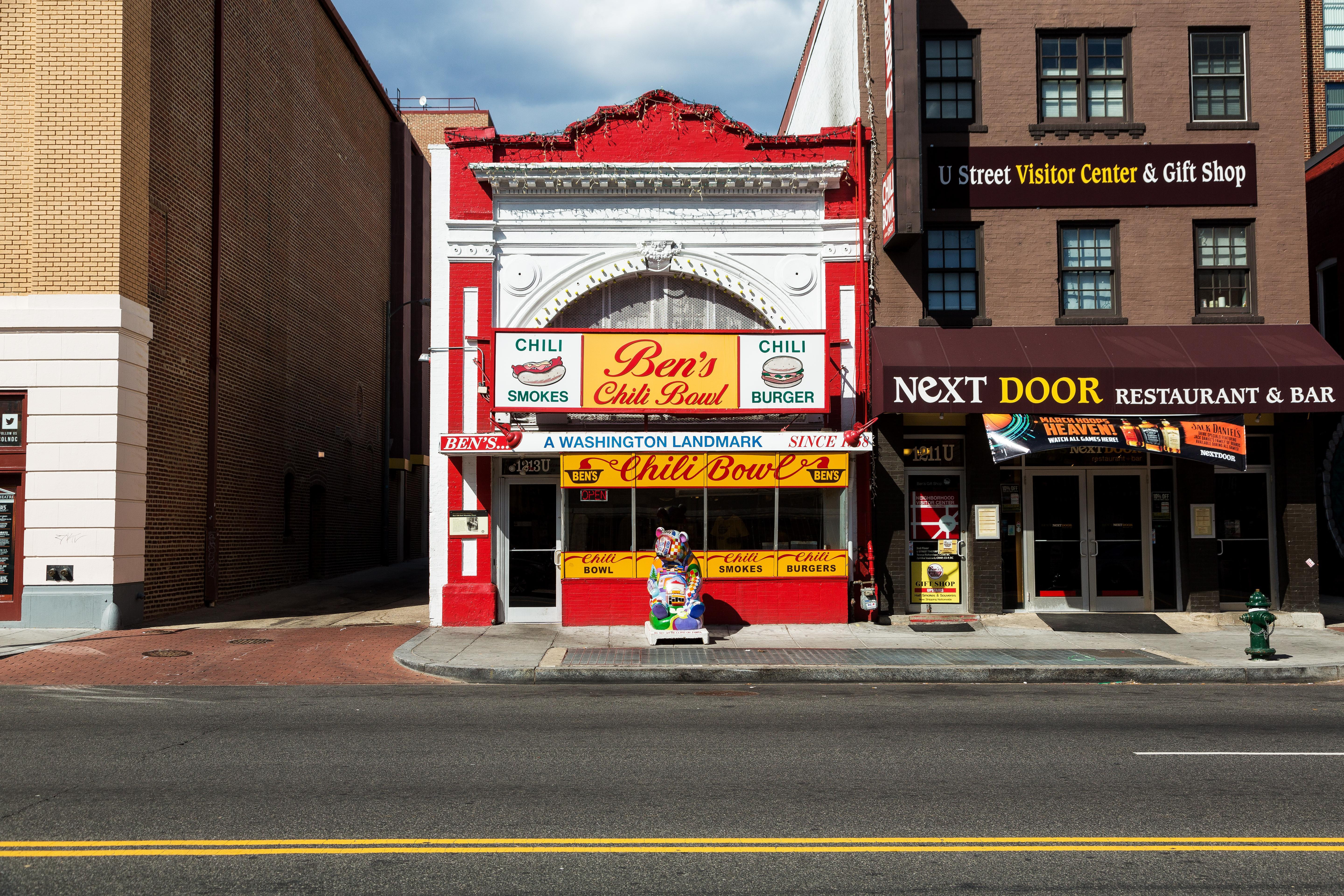 Washington DC isn’t just a popular destination for history buffs. Thanks to its diverse neighborhoods and international communities, it’s also home to a wide range of culinary offerings. From Ethiopian platters to hearty Italian fare, from beloved chili dogs to indulgent cupcakes, here’s what you should be sure to sample while visiting the capital.

One of DC’s most beloved eateries, located on U Street (an area once referred to as “the Black Broadway”), Ben’s Chili Bowl has been a local staple since the 1950s. President Obama made waves when he visited the restaurant in 2009, and you can follow in his footsteps when you drop by and order a chili half-smoke (chili dog).

DC’s delicious U Street area is also home to a thriving Ethiopian community. If you’re new to the cuisine, order a combination platter, which typically consists of numerous spice-laden stews, all served atop a round of injera (spongy flatbread that tastes like sourdough and takes the place of silverware).

If you have a sweet tooth, look out for Georgetown Cupcake, one of the city’s most popular and successful dessert chains. Locations are now found all over DC, though pretty Georgetown is, as the name suggests, where the company got its start. Enjoy classics such as red velvet or inventive flavors including strawberry lemonade and butterscotch waffle cone.

DC is home to plenty of movers and shakers, and while their politics may differ, there’s one thing most of them can agree on: steak. Consequently, the capital is home to a surfeit of traditional steakhouses. For a lavish dinner out, order a porterhouse or chateaubriand with truffle fries on the side.

Italian is among the most popular cuisines in Washington DC, and if you head to vibrant neighborhoods such as Dupont Circle, you can look forward to a decadent introduction to the city’s trattorias and other traditional eateries. Enjoy seasonal pasta dishes, or go off-piste with risotto.

Salvadoran cuisine is a mainstay in DC—often served alongside Mexican food in restaurants—and its signature dish has become a favorite in the capital. Think of pupusas as thick, pancakey tortillas, frequently stuffed with cheese, refried beans, andchicharrónes (pork rinds).

42
Come hungry for food and for knowledge on this historical and culinary tour of Georgetown, whose roots predate Washington DC. Learn about Georgetown's 250 years of history, from its origins as a working class port city to its current status as a trendy college neighborhood, and stop to sample a broad selection of some of the best food the neighborhood has to offer. Tastings can range from tacos to Korean tapas to French cuisine paired with wine, and all tastings are included in the price.
…More
From
$81.51
From
$81.51

232
Put down your guidebook and skip the stress of navigating on your own when you book a gourmet food and walking tour through historic Georgetown. Your guide takes you off the beaten path to highly-rated establishments, from a deli loved by locals to an Indian restaurant that’s been around for 20 years. Along the way, see hidden landmarks often missed by visitors, including Julia Child’s former home.
…More
From
$79.18
From
$79.18

1
Immerse yourself in multicultural Dupont Circle on a gourmet food and walking tour to the area’s best eateries. Going with a guide eliminates the hassle of navigating on your own, instead allowing you to relax and enjoy the ambiance of the neighborhood. Over the course of the afternoon, skip lines to sample locally-sourced foods from a range of international cuisines, from Moroccan to Malaysian.
…More
From
$78.91
From
$78.91

4
Expand your palate on a leisurely food tour through Little Ethiopia in the heart of U Street, Washington DC. Going with a guide allows you to skip the research and head directly to the area’s best restaurants, where you sample a variety of complex flavors—from deep-fried lentils to freshly-baked traditional breads. Throughout the tour, listen to stories oven unheard by visitors about the largest Ethiopian community outside Ethiopia.
…More
From
$71.24
From
$71.24

37
Skip the stress of planning and navigating on your own when you book a food and walking tour of historic H Street. As you taste your way through the multicultural neighborhood, listen to little-known and sometimes controversial anecdotes about the construction of the U.S. capital. Your guide eliminates the stress of navigating on your own, which allows you to relax and enjoy views of major landmarks along the way.
…More
From
$83.87
From
$83.87
Social distancing enforced throughout experience
Guides required to regularly wash hands
Paid stay-at-home policy for staff with symptoms
Learn More
Taking safety measures

9
Get to know Capitol Hill through its food and culinary culture on this guided walking tour. Listen to a guide's commentary on one of the city's oldest and historically diverse neighborhoods, stopping to sample a variety of dishes such as Anglo-Indian food, Salvadorian cuisine, soul food, and others. This small group, limited to just 12 participants, ensures personalized attention and a chance to ask questions.
…More
From
$79.18
From
$79.18

3
Immerse yourself in Adams Morgan’s diverse food scene on an afternoon tour of the area’s best eateries. Over the course of the afternoon, sample dishes from a range of cuisines, from Peruvian to Nepalese. Going with a guide eliminates the stress of choosing where to dine on your own, and ensures you walk away with an inside perspective on the neighborhood.
…More
From
$75.62
From
$75.62

88
Follow a passionate foodie guide on foot to several Italian restaurants in the Dupont Circle neighborhood of Washington, DC. You’ll visit local establishments and savor four to five food tastings with a wine pairing during this 3.5-hour tour, which offers various departure times. Learn about regional history, architecture and all things Italian while you walk and discover these culinary gems. Numbers are limited to 16 participants to ensure an intimate experience.
…More
From
$65.00
From
$65.00