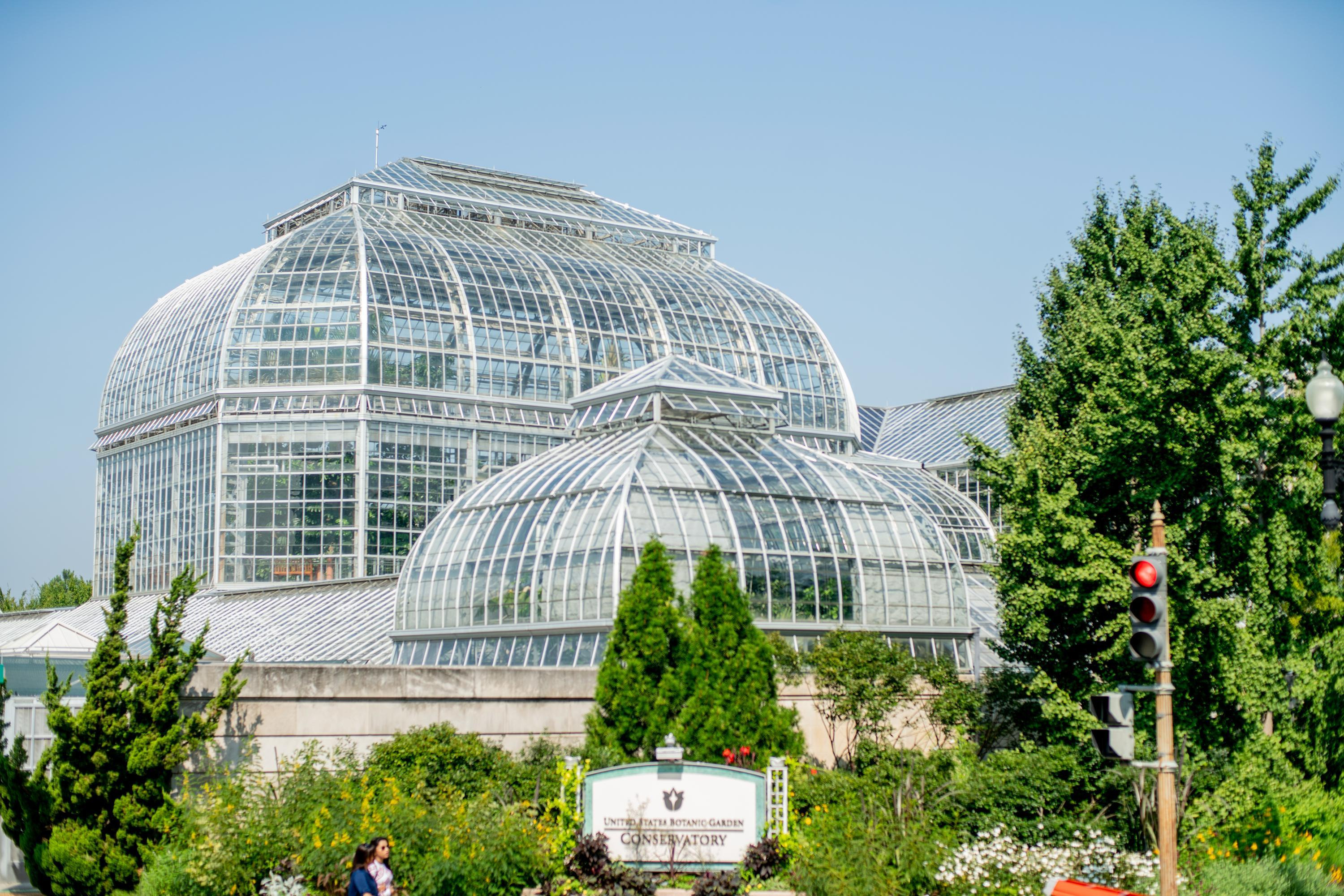 Though Washington D.C is best-known for its monuments and museums, it also has a wide array of green spaces that offer respite from the hustle and bustle of city life. From the exotic plants of the U.S Botanic Garden to the hiking trails of Theodore Roosevelt Island, here are some of the best parks and gardens in Washington, D.C.

Next to the Capitol Building, the U.S. Botanic Garden is home to plants from across the globe, including azaleas, lilies, orchids, and a tropical rainforest that spans different environments in the Conservatory.

As well as boasting 22 Corinthian columns that once formed part of the Capitol building, the United States National Arboretum showcases ornamental trees and plants, and is home to the National Bonsai & Penjing Museum. One of the best times to visit is in spring, when the azalea collection is in bloom.

Managed by the National Park Service, Theodore Roosevelt Island is a fitting memorial to America’s 26th President, who was known as the Great Conservationist. Perched on the banks of the Potomac River, the island is a wilderness preserve home to several hiking trails.

Sitting atop the highest point in the city, 59 acres (24 hectares) of landscaped gardens surround the Washington National Cathedral. Bishop's Garden is home to magnolias and orchids; Little Garden resembles a medieval herb garden; and Olmsted Woods is the last vestige of an extensive oak and beech forest.

Especially appealing to birdwatchers, the 12-acre (5 hectare) Kenilworth Aquatic Gardens is a National Park site where you can spot nesting, aquatic, and woodland birds such as night herons, indigo buntings, bald eagles, and great egrets. The gardens also feature exotic water lilies, which are celebrated during the annual 2-day Lotus and Water Lily Festival.

1952
Ride a luxury mini-coach past major landmarks on this night bus tour of Washington DC. Gaze at floodlit memorials and monuments, such as the magnificent Lincoln Memorial and the glow of the Jefferson Memorial reflected in the Tidal Basin. After this sightseeing tour, you’ll understand why the nation’s capital is considered one of the world’s most beautiful cities at night.
…More
From
$58.00
From
$58.00
Face masks required for travelers in public areas
Face masks required for guides in public areas
Hand sanitizer available to travelers and staff
Learn More
Taking safety measures

573
Experience the sights and sounds of Washington, DC in one day on this guided walking and riding sightseeing tour around the nation’s capital. Visit the city’s historic, iconic landmarks and monuments, like the White House, the United States Capitol, the Vietnam Veterans Memorial, and the Lincoln Memorial. See and learn about the memorials of famous American leaders who helped shape the United States, like Abraham Lincoln, Thomas Jefferson, and Martin Luther King, Jr., to name a few. Includes a seasonal Potomac River cruise.
…More
From
$74.00
From
$74.00
Face masks required for travelers in public areas
Face masks required for guides in public areas
Hand sanitizer available to travelers and staff
Learn More
Taking safety measures

1688
Discover the most popular sights in Washington, DC on this relaxing hop-on hop-off bus tour. Drive past many of the top attractions in the nation’s capital — including the White House, the Washington Monument, the National Mall, historic Georgetown, and Arlington National Cemetery, and choose where you want to get off and explore in more detail. Select a 1- or 2-day pass, then hop on at any of the stops on two different routes and get to know the city with an audio commentary. The 2-day option includes admission to Madame Tussaud's Wax Museum.
…More
From
$44.10
From
$44.10
Face masks required for travelers in public areas
Face masks required for guides in public areas
Face masks provided for travelers
Learn More
Taking safety measures

1627
Explore the famous monuments and memorials of Washington DC by moonlight on this narrated sightseeing tour. Hop aboard an open-air trolley and enjoy an educational and entertaining history of the nation’s capital while traveling past each point of interest. Take in the stunning views of an illuminated Lincoln Memorial, the Washington Monument, the White House, and many other landmarks. This is a truly unique look at the iconic monuments of Washington DC by night.
…More
From
$45.00
From
$45.00
Face masks required for travelers in public areas
Face masks required for guides in public areas
Hand sanitizer available to travelers and staff
Learn More
Taking safety measures

Looking for Washington DC private tours? Explore DC with World’s Five Star Limo Service. This SUV Tour is for up to 7 people. We provide pick up and drop off at any desired place in Washington DC, Virginia and Maryland. Distinguish customer service, modified limos and reliability shape our Tour Quality. Capture yourself in front of most of the historical buildings in the shortest possible time.
…More
From
$437.27
per group
From
$437.27
per group

376
There's a certain magic to Washington DC when the sun gets low in the sky, and the pale orange glow of evening twilight begins to change into night. On this twilight Washington DC open top double-decker bus tour, grab your camera and hop on board to tour America's capital, as we cruise by bus around the memorials, monuments, and US Capitol. You'll also have time to snap a photo while standing outside the White House, and pay your respects at war memorials from Korea and World War II.
…More
From
$45.00
From
$45.00

44
Experience the very best of Washington, DC, on a fully-customizable, 4 to 5 hours private tour with a personal van and driver. Create the perfect route for your interests, choosing from over fifty points of interest. See the city’s political, historical and scenic highlights, or focus on a single theme, with plenty of time to explore the sites that appeal to you most. Take in Capitol Hill and the Supreme Court, gardens, Presidential memorials, War Memorials and landmarks, or head outside the city to see Arlington National Cemetery and Mount Vernon Estate.
…More
From
$102.74
From
$102.74