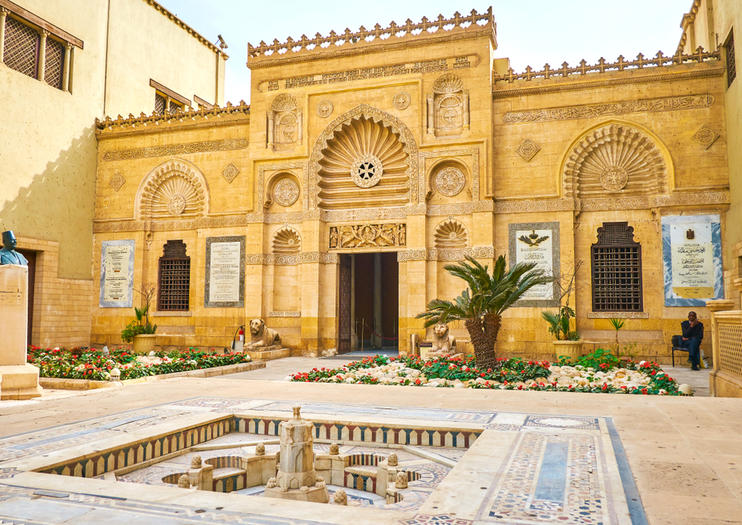 Founded in 1908, Cairo’s Coptic Museum houses one of the world’s biggest collections of Egyptian Christian art. The displays trace the history of Egypt’s Coptic Orthodox Church—one of Christianity’s oldest denominations—and how it was shaped by pharaonic, Roman, and other influences from the second century on.

The Basics
At the museum, visitors can roam the main wing and two annexes, all filled with antiquities ranging from pharaonic funerary treasures to Roman-inspired sculptures and Coptic manuscripts, textiles, and coins. While you’re free to explore independently, the Coptic Museum also features on many Cairo tours, giving you the bonus of door-to-door transport and a guide for commentary. Many of these call at the museum as part of a roundup of Coptic Cairo’s landmarks, such as the Hanging Church and Ben Ezra Synagogue, while others fan out to include Mokattam’s Cave Church.

For a wider overview, book a tour of all of Old Cairo, adding sights such as the Citadel and Khan El-Khalili bazaar into the mix. Other options include full-day, museum-dedicated tours and multi-day options that bundle all Cairo’s highlights into two or more days, with transport and hotel pickup and drop-offs included.

How to Get There
The Coptic Museum is situated in Cairo’s Coptic Christian quarter, in the heart of Old Cairo, close to many of the area’s Coptic churches. The easiest way to get there is by cab or on a tour that also covers the museum’s Coptic neighbors. To travel here independently, catch the metro to the Mar Girgis station, a 2- or 3-minute walk away.

When to Get There
The museum opens daily from morning to late afternoon, and the ticket office closes an hour before the museum. During Ramadan, opening times are shorter. The museum is never overly busy, so you can expect to enjoy the displays in quiet surroundings at any given time.

Highlights at the Coptic Museum
The Coptic Museum sits next to Cairo’s ancient Roman fortress of Babylon, in a historical and picturesque setting that chimes with its ancient artifacts. Inside, don’t miss treasures such as the carved doors from Coptic monasteries, early wooden toys, and a 7th- or 8th-century artwork depicting three mice begging a cat to leave them alone—all among a plethora of other exhibits.
Adresse: Coptic Cairo, 3 Mari Gerges, Kom Ghorab, Old Cairo, Cairo, Cairo Governorate, Egypten
Læs mereVis mindre