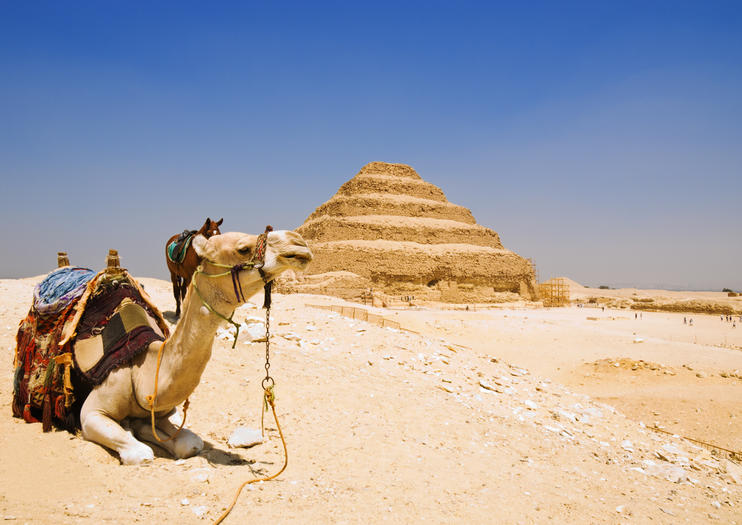 Considered the original pyramid and the world’s earliest stone monument, the Pyramid of Djoser (Step Pyramid) is a highlight of any trip to Saqqara. Built in 2650 BC, it still stands proud over Saqqara, surrounded by the remains of ritual buildings.

The Basics
A trip to Egypt isn’t complete without seeing the pyramids. Most tours of Saqqara include the Pyramid of Djoser, alongside the Pyramid of Teti and the tombs of Old Kingdom nobles. Guides sometimes tell the story of the Heb-Sed, a ritual race that the ruling pharaoh ran.

Tours of ancient Cairo often stop at the Pyramid of Djoser, the famous Giza pyramids, and Dahshur (home of the Bent Pyramid). Alternatively, spend one day touring Saqqara, Dahshur, and Memphis (a capital of ancient Egypt), and visit the Giza pyramids on another.

How to Get There
The Pyramid of Djoser sits within the Saqqara necropolis (city of the dead), about 20 miles (32 kilometers) south of Cairo, 6 miles (9 kilometers) north of Dahshur, and 3 miles (4.5 kilometers) west of Memphis. Public transit can be difficult if you don’t speak Arabic. Most travelers visit on a full- or half-day tour from Cairo or Giza.

When to Get There
Saqqara is open every day, morning through afternoon. It’s much less crowded than the Giza pyramids, so if you have only one day to visit a wealth of ancient Egyptian sites, visit Saqqara in the afternoon. If you have more time, arrive at opening to beat the buses.

What Did the Pyramid of Djoser Look Like Originally?
When Pharaoh Djoser’s architect, Imhotep, completed the pyramid, it towered 197 feet (60 meters) above the land, encased in shining limestone and surrounded by temples and ritual structures. Today, the bright white limestone facing is gone—only crumbling bricks remain. But you still get a sense of the scale, as you approach through a hypostyle hall and a vast open court. Don’t miss the serdab, a room that houses a replica statue of the pharaoh.
Adresse: Saqqara, Egypt, Egypten
Læs mereVis mindre