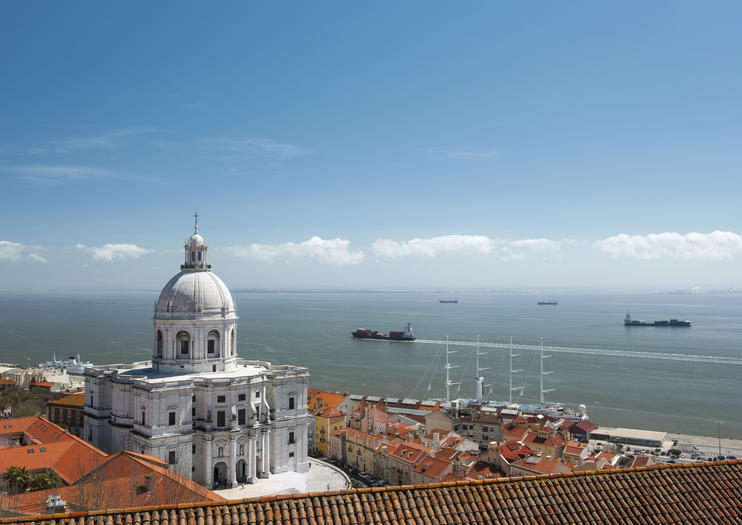 Originally built in the 17th century as the Church of Santa Engracia, the National Pantheon (Santa Egracia Panteao Nacional Lisbon) is now the burial place of many notable Portuguese personages, such as fado superstar Amália Rodrigues. The massive white structure is omnipresent throughout Lisbon’s Alfama district, and its interiors feature beautiful Italian marble.

The Basics
Portugal’s National Pantheon is an impressive baroque building with a rocky history. Notable figures are interred here—including writer João de Deus, football star Eusébio da Silva Ferreira, Air Force general and politician Humberto Delgado, and several former presidents—and there are cenotaphs to Vasco da Gama, Henry the Navigator, and others. Catch stunning panoramic views of Lisbon and the Tagus River from the terrace of the Pantheon’s dome.

See the National Pantheon as part of various Alfama and Lisbon sightseeing tours, including those via foot, bike, Segway, electric tuk-tuk, and boat along the Tagus.

How to Get There
Church of Santa Engracia, the National Pantheon (Santa Egracia Panteao Nacional Lisbon) is located next to the Feira da Ladra flea market in Alfama. Take tram 28 to the Arco de São Vicente stop. Alternatively, take the blue metro line or a number of city buses to Santa Apolónia, from where the building is a short but steep 10-minute walk.

When to Get There
The Pantheon is open from 10am to 5pm Tuesday to Sunday except for January 1, Easter Sunday, May 1, and December 25. Lisbon is quite crowded during the summer months, so consider visiting between October and June for a quieter experience.

A Turbulent Construction
The baroque structure that is now the National Pantheon took 285 years to build, from 1681 to 1966. Legend has it that a curse was placed on the new church’s construction after an innocent man was accused of vandalizing the original church and was then put to death. The edifice was meant to be modeled after St. Peter’s Basilica in Rome, but the original architect, João Antunes, died in 1712, and priorities changed during its almost 300-year construction.
Adresse: Campo de Santa Clara, Lisbon 1100-471, Portugal
Læs mereVis mindre