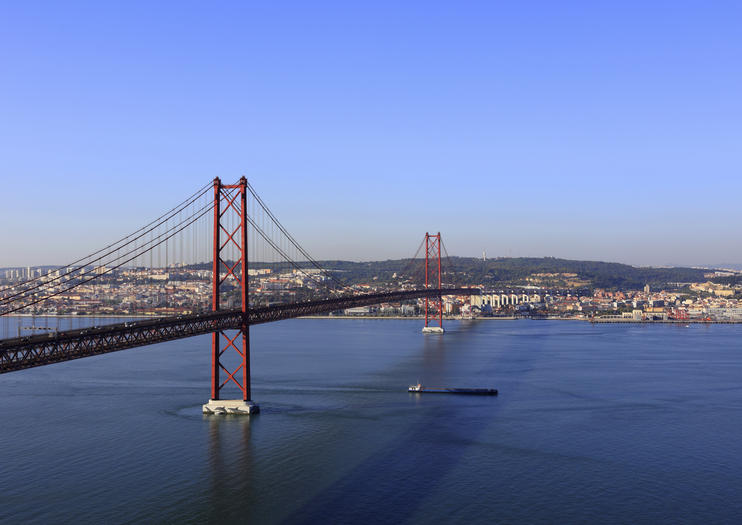 One of Lisbon’s most famous landmarks is the massive, red suspension 25th of April Bridge (Ponte 25 de Abril) which bears a close resemblance to San Francisco’s Golden Gate Bridge. Originally named the Salazar Bridge, it was renamed after the Carnation Revolution to bring down the tyrannical regime that began on April 25, 1974.

The Basics
The 25th of April Bridge (Ponte 25 de Abril) is one of Europe’s longest suspension bridges and has the deepest foundation of any bridge on the continent. Underneath the bridge is a dock and marina lined with restaurants and bars, and a museum and observation deck—offering unparalleled views of the bridge and surrounding area—were added to one of the bridge’s pillars in 2017.

You can see the bridge from many viewpoints in Lisbon. Most sailing and catamaran tours cruise under it, giving passengers incredible views of this beautiful landmark.

Things to Know Before You Go
How to Get There
Travel across the bridge by car or take a southbound train from Cais do Sodre, Entrecampos, Oriente, or Sete Rios. For a great view of the bridge without crossing, take the train from Cais do Sodre to Alcantara Mar, or ride tram 15, and walk along the river to Doca de Santo Amaro. The observation deck is accessible from the Vila Gale Opera Hotel.

When to Get There
The bridge sees bumper-to-bumper traffic during rush hour, generally from 8am to 10am and 5pm to 8pm. Traffic is thicker in summer, so aim to come during the shoulder months, when fewer tourists and locals take the bridge to escape to the warmer beaches of the south.

Golden Gate’s Twin
25th of April Bridge (Ponte 25 de Abril) may seem very familiar to many visitors, and that’s because it is modeled after the Bay Bridge in San Francisco—though it very closely resembles that city’s Golden Gate Bridge. The American Bridge Company constructed the bridge in 1966, a full 30 years after its San Francisco sister, to connect Lisbon to Almada in the south.
Adresse: Ponte 25 de Abril, Lisbon, Portugal
Læs mereVis mindre