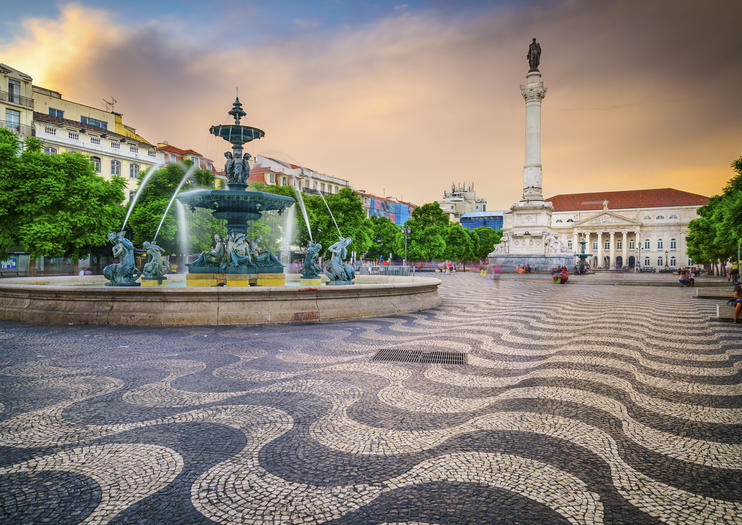 Named after the beautiful train station that is adjacent, Rossio Square (Praça de Dom Pedro IV) has been the nerve center of Lisbon since the Middle Ages. The lively area is a popular meeting point for Lisboetas and visitors alike, and is packed with bars, restaurants, cafés, shops, and some accommodations.
The Basics
Bustling Rossio Square (Praça de Dom Pedro IV) is characterized by the cobblestones’ wavy soapstone pattern and the Column of Pedro IV, known as Portugal’s Soldier King. Grab a seat on the terrace of the 200-year-old Café Nicola for stellar people-watching, or sit on the steps of the National Theatre (Teatro Nacional Dona Maria II) for a great view of the plaza and its beautiful baroque fountains.
Many half- and full-day tours of Lisbon—offered in a number of languages including English, Spanish, Italian, and French—start in or pass through Rossio Square. Hop-on hop-off sightseeing tours stop here as well. Music lovers can visit Rossio Square as part of a private tour that includes a live fado performance and dinner show.
Things to Know Before You Go
How to Get There
Located in the middle of Lisbon, Rossio Square (Praça de Dom Pedro IV) is easily accessible by taxi, on foot, and via public transport. The aptly named metro station is Rossio Square, and several public buses (207, 732, 736, 746, and 783) service this popular area.
When to Get There
Rossio Square (Praça de Dom Pedro IV) is a central meeting point for many, and is always lively and busy. The shoulder months of April, May, September, and October are considered to be the best times to explore Lisbon, when temperatures are cooler and crowds are thinner than during peak season (June through August).
The History Behind Rossio
After the devastating earthquake of 1755, Rossio Square (Praça de Dom Pedro IV) became the unofficial city center of Lisbon. Once filled with packed hotels, tobacconists, and cafés that served as forums for cultural, philosophical, and political discussions, only a few cafés have remained and thrived. Today places such as Café Nicola serve as reminders of old Lisbon and continue to serve throngs of people each day.
Adresse: Portugal
Læs mereVis mindre