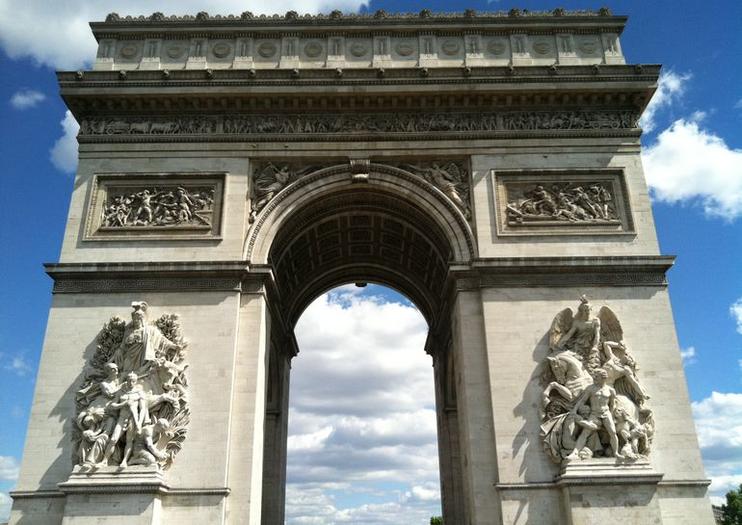 The Arc de Triomphe, standing proudly in the circular Place Charles-de-Gaulle at the top of the Champs Elysées, is a symbol of the French nation. It stands at the crossroads of the magnificent axial avenues defining Paris, and honors all those who fought for France, particularly in the Napoleonic Wars. Written on the arch are all the wars fought by France and the names of the French generals involved. It is also the location of the Tomb of the Unknown Soldier commemorating those lost in World War I.

Udsigt over Paris
Climber785789
, jul. 2019
Wow oplevelse, så absolut værd at gå derop, selv op det var meget varmt. Man får den skønneste udsigt over hele Paris.
... MereMindre
WORST CUSTOMER SERVICE EVER
Stephanie_F
, mar. 2020
Due to the travel ban and the French government restricting gatherings to 100 people, my family and I were unable to go to France and attend this excursion. I contacted the company by email several days in advance with no response. When I clicked “manage my booking” it took me to a page that said “error, does not exist”. They never responded, emailed, Or remedied the situation at all. Terrible company, no customer service, and I would definitely NOT recommend to anyone looking for quality service while they travel.
... MereMindre
Perfect visit starter
Garance_B
, mar. 2020
Excellent view. Worth it. As a first visit of the day it was perfect.i highly recommend but you need to be for for the stairs.
... MereMindre

Make for the top of one of the most iconic monuments in Paris and prepare for amazing views Enjoy a unique view of the Champs-Élysées and pay your respects at the Tomb of the Unknown Soldier
...  Flere
Fra
20,65 $ USD
Fra
20,65 $ USD
Få flere oplysninger