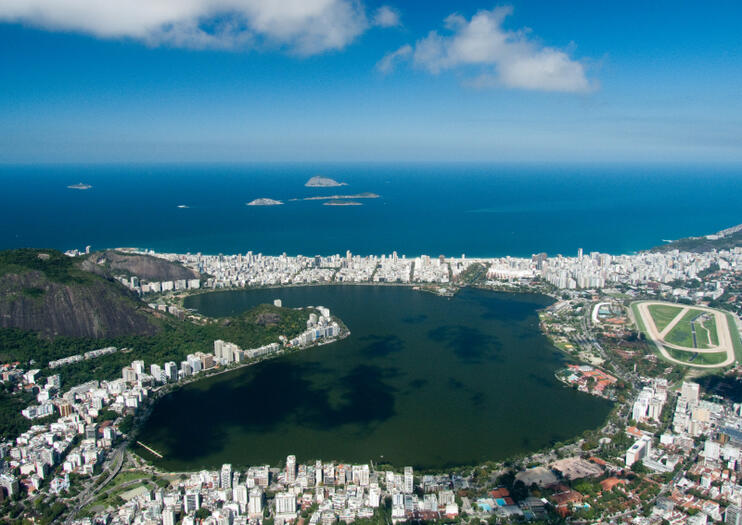 Situated at the heart of Zona Sul in the shadow of Corcovado, Rodrigo de Freitas Lagoon serves as a recreational area and beauty spot for local residents. It boasts more than 4 miles (7 kilometers) of bike and jogging trails, boathouses for rowing, and sometimes hosts live music.
The Basics
No visit to Rio would be complete without visiting this picturesque spot. Many sightseeing tours combine a stop at the lake with top attractions such as Copacabana, Ipanema, Christ the Redeemer, and Sugarloaf Mountain. If visiting independently, you’ll find bikes available for rent at several points around the lake. Canoe and swan boat rentals also give you the chance to take in the scenery from the water.
Things to Know Before You Go
How to Get There
The lagoon is within easy walking distance of Leblon, Ipanema, Copacabana, and Jardim Botânico. If you’re coming from further afield, it’s best to take a taxi. The closest metro stations are Jardim de Alah and Nossa Senhora da Paz.
When to Get There
The lagoon is at its liveliest in the late afternoon, when locals come out for after-work recreation. Visit in the evening hours for cocktails and live music along the shore. It’s one of the best spots to watch sunset in Rio.
History of Rodrigo de Freitas Lagoon
Named for a young Portuguese army official who lived in the area in the early 1700s, the glassy lagoon has a much less placid history. The first Portuguese settler in the area, Rio governor Antonio Salema, slaughtered the indigenous Temoio Indians with smallpox-infected clothing when he arrived on the scene in 1575 to build a sugar mill. Subsequent conquests have been as recent as the 1960s, when residents of a favela built on a neighboring hillside were forcibly removed and the hill, along with the ramshackle dwellings, was flattened to make way for some of the high-class high-rises that exist today.
Adresse: Brasilien
Læs mereVis mindre