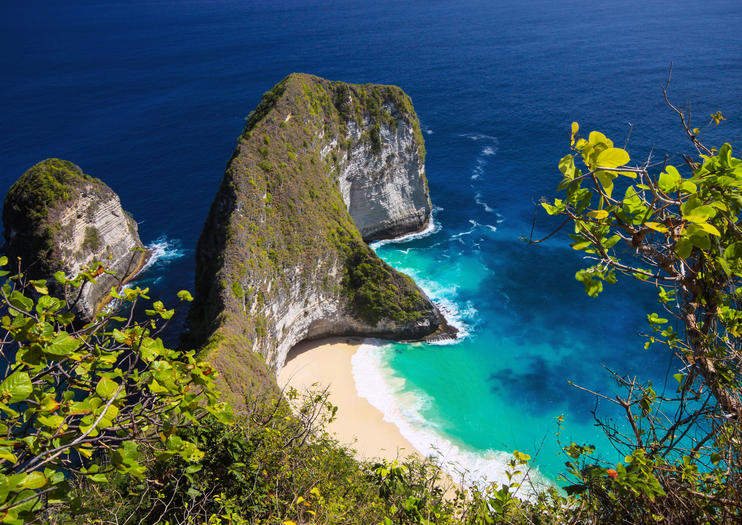 Considered to be the Bali that time forgot for its unspoiled landscape, Penida Island (Nusa Penida) sits about 10 miles (15 kilometers) off the Bali coast, alongside the islands of Nusa Lembongan and Nusa Ceningan. Besides snorkeling and diving—the island is known for mantas and mola-molas (the world’s largest bony fish)—Penida offers unspoilt villages, rugged landscapes, and sacred temples.
The Basics
Both slow boats and fast boats run from Bali to Penida Island. Some travelers opt to visit independently, rent motorbikes or hire a driver, and spend a few days touring. A guided tour allows for a more seamless experience, especially for those looking to spend just one day on Penida Island.
Many Penida Island tours focus on the island’s underwater attractions: snorkeling or diving with giant manta rays at Manta Point or Manta Bay, diving in search of the mola-mola (ocean sunfish) at Crystal Bay, and admiring the coral and marine life at a wealth of sites. Watersports are also an option, and a handful of tours highlight Penida’s serene charm, visiting its natural wonders, traditional villages, and temples.
Things to Know Before You Go
How to Get There
Penida Island sits in the Lombok Strait, about 10 miles (15 kilometers) off the southeastern coast of Bali. Ferries and speed boats leave daily from Padang Bai, following a changing schedule, while speed boats run from Sanur Beach and Lembongan Island. Snorkeling and diving tours typically depart from Sanur, but often offer the convenience of transport direct from your door.
When to Get There
Scuba divers in search of the elusive mola mola (ocean sunfish) should visit between late June and October; mantas can be seen year-round. High waves are not uncommon in late July and August, which can island access difficult and snorkeling a challenge. Penida is drier than mainland Bali, so it’s a good choice for the rainy season (October to March), although in the rainy season, the ocean floods with plastic trash.
Giants of the Deep
Also known as the oceanic sunfish, ocean sunfish, or giant sunfish, the mola mola is one of the largest known bony fish in the world: Adults can weigh a whopping 2,205 pounds (1,000 kilograms). Between late June and October, mola mola are often seen off Penida, particularly around Crystal Bay, as cold water upwells from the depths where these giants spend their time.
Adresse: Bali, Indonesia, Indonesien
Mehr lesenWeniger anzeigen