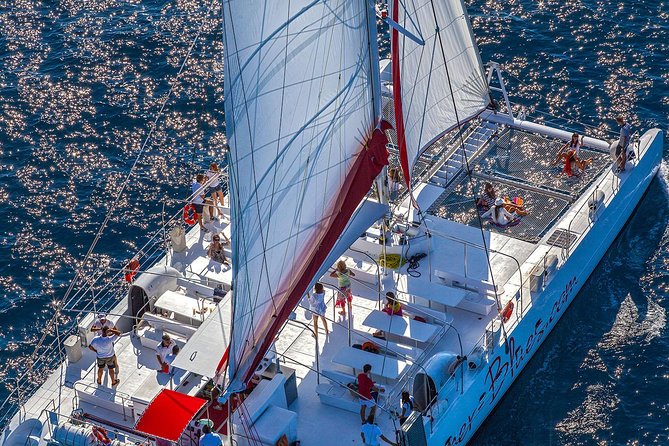 Waterfall was beautiful. The young man...

Waterfall was beautiful. The young man who took us was nice, but spoke little English. This was a transport rather than a tour with a guide.

Tour did not run on the day that our...

Tour did not run on the day that our confirmed booking was for. Agent assumed we could go the next day but we were leaving on a boat the next day.

Great place to visit! All the 'tour...

Great place to visit! All the 'tour' included was the travel to and from the park. But it worked well for us rather than finding our way there by bus. I definitely recommend visiting the park

The day before we were booked I...

The day before we were booked I received an email that the meeting time was 12 pm. The itinerary said we would be leaving at 11 am so I sent an email back asking for confirmation. No one got back to me so we went early to the meeting place, just in case, and waited around for an hour.

The 30 minute drive to Trogir was uneventful and would have been nicer and probably faster by boat. When we arrived at our destination in Trogir we realized that almost everyone else was scuba diving and not snorkeling. After about a 40 minute boat ride we were at a small rock and were given about an hour to swim around it. It took us 25 minutes and we chose to only go around once. It was very underwhelming and the day seemed to drag. Not only did we not see any rare wildlife or abandoned shipwrecks as it said in the description, we barely saw more than 2 different types of fish. We brought our own snorkels to Croatia and very much enjoyed snorkeling at the local beaches.

Excellent trip, well organised and everything ran to time. The guide was brilliant.

I honestly did not like this trip, it was subpar and really just underwhelming. How can a ferry ride be considered a cruise? The tour was too short, and not exactly a tour. We literally just paid for the bus to drop us off at the lake and the tickets. I could have easily taken a bus/ferry to the lakemyself if i had know that i paid just for that. Sibenik should be scrapped all together, pointless waste of time.

The crew was really nice and friendly...

The crew was really nice and friendly however note that the boat does not stop in Hvar, it is only Brac island (Bol and Golden Horn). The island is quite pretty and you'll have 4 hours to explore. Lunch was decent, served on board. Free unlimited wine and soft drinks also included.

This tour was not 6 hours - great tour but don' book it if you're needing to get back within 6hours!!!!

Pretty good - title says private transfer though - definitely wasn't private, there was a bus of about 50 people

I echo Stuart's review. Wish he had...

I echo Stuart's review. Wish he had posted that before I booked! This is pure transport and the listing should be amended as this is neither private nor a tour. Other inaccurate claims in description:

The listing says they'll pick you up from hotel but auto-email said to show up at tour office at 945am. I emailed if they could pick us up as we were outside Old Town. No response. So while in Old Town the night before we stopped by and asked about it. They said sure no prob we'll pick you up at 10. By 1015-20 I emailed them as no one showed up. I got a reply there was traffic they would be there in 10 min. So now around 1040 finally someone shows up. The driver says there was a delay because some passengers didn't show up. Not sure what the story was but my guess is had I not emailed them that bus was leaving without us!

Anyway, the falls were good, completely crowded but weekend in season this is expected. And Im not really opposed to paying just for transport. At this price it's reasonable. Ironically, I chose this as I didn't want to pay more for another tour that would stop at an old town or monastery or wine or whatever. We just wanted the day at the falls.

I will say that the organizer was sporting as we finally arrived at noon and he wanted people back at 330, but as we paid for 4 hour tour and it was not the group's fault the day was extended to 4.

Anyway, if you go in knowing you are just paying to share a bus with a load of Aussie hostelers then this is not a problem. I just have an issue with how the trip is marketed on here. I rarely if ever give negative reviews but as a marketer who never makes false claims and doesn't want to trick prospects into buying I just felt I had to say my piece. :

This was an excellent trip. Van picked...

Samuel V
Krka Waterfalls Private Tour from Zadar | Jul 2016
This was an excellent trip. Van picked us up at cruise ship and transported us to KRKA Waterfalls. We stayed at the falls as long as we wanted and then they transported us back to ship. They would have taken us into Zadar also but we chose to spend all of our time in the National Park.
Mehr erfahren

We had such a fun day! The tour was well organised and timed perfectly. We loved the swimming stops to jump off the boat, lunch recommendations and the shipwreck. We felt safe and well informed all day. Thank you for a great day :)

Krka waterfalls are beautiful but this...

Krka waterfalls are beautiful but this is not a tour!! Do not be fooled this is purely transport to and from!!!!

PRIVATE TOUR NOT INCLUDED. which means...

PRIVATE TOUR NOT INCLUDED. which means the agency got left over money after Accommodation. That was nice and host made us welcome and explained the area. There was group tours at lakes but they wouldn't accept our private voucher. Pay for the accom and do the lakes but not through here. Lakes were great

This package seemed to be missing...

This package seemed to be missing everything described. The accomodation didn't know we were coming and wasn't located where views could be had. It was particularly underwhelming. There was no tour. Would not recommend accommodations extremely disappointed. The lakes were amazing! Would stay elsewhere