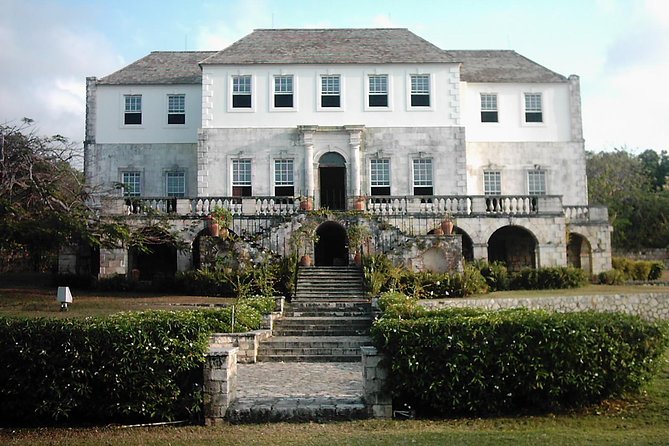 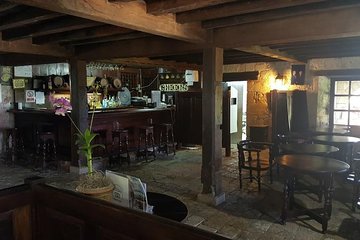 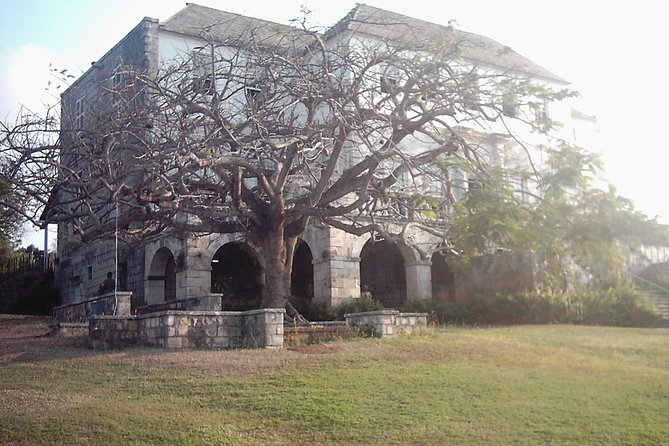 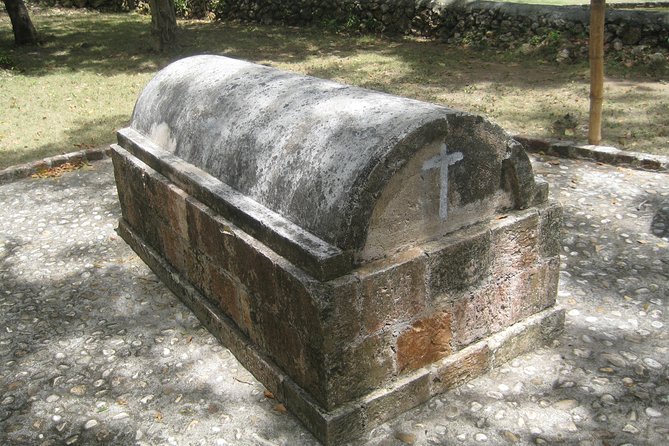 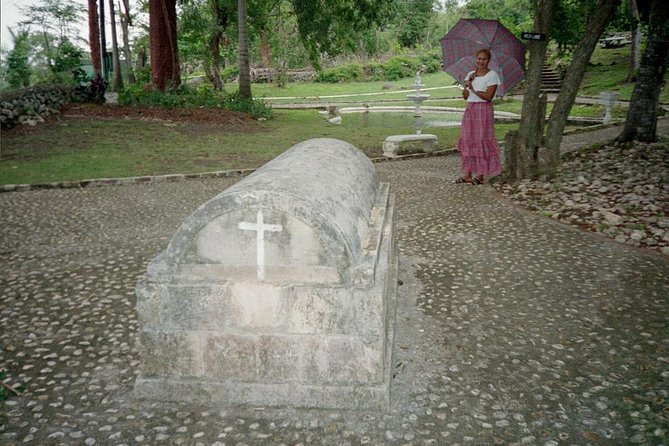 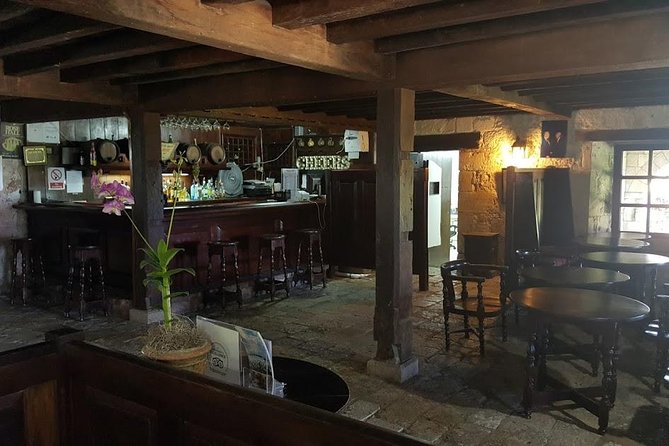 4.5
3 Bewertungen
5 Sterne
4 Sterne
3 Sterne
2 Sterne
1 Stern
Bewertungen von Viator-Reisenden
Amazing History
Fearless02953454039
, Jun 2019
Great tour. Gift shop is tiny and with the volume of people in and out, it can be rather arduous. Recommend to get your souvenir photo outside then enter, or if you are inside first, when checking out let the cashier know you want the photo. Why? They charge you inside for the photo. IF you don't do it one of the above ways, you will soon realize why I gave suggestions. History of the plantation was amazing. The house is beautiful......
… mehrWeniger
Antwort des Gastgebers , Jun 2019
Thank you for your review...
… mehrWeniger
A Wonderful Eerie Experience
Shannon M
, Sep 2018
My adult daughter and I toured Rose Hall Great House with VIP Tours (day tour) and it was a wonderful experience. We basically had the house to ourselves for at least a half hour. The guide was thoughtful and well versed in the historical background of Rose Hall. If you are afraid of ghosts, you might not want to tour but we loved it and would love to do it again, at night.
… mehrWeniger
Antwort des Gastgebers , Jun 2019
Thank you for your review. It was a great pleasure having you on our tour.
… mehrWeniger

dgrdale20002019
Rockland Bird Sanctuary Tour from Montego Bay | Okt 2019
The road up to the sanctuary was exhilarating and fun! Fritz, the proprietor, is a soft spoken man, but has great knowledge of the creatures in the preserve, and obviously loves them dearly. The tiny birds themselves tugged greatly at my heartstrings for sure! I would go back.
Mehr erfahren

Our driver from VIP Tours Jamaica...

Our driver from VIP Tours Jamaica was amazing. I have been to Jamaica several times, but Patrick was the best tour guide I have ever had! The tour of the estate is very thorough, they don’t miss a step. I would recommend this tour and this driver to anyone visiting the island.

We took this trip and had a very...

We took this trip and had a very nice time! We were picked up at the dock by Patrick and had a very comfortable ride to the river. Upon arriving at the river we were informed that the raft trip was an additional 60.00 cash per raft. I informed them that we had paid the 120.00 for this trip and had vouchers for the trip. They informed us that was for the transportation not for the raft trip. I was taken back by this and felt I had no choice but to pay as we were in the middle of a jungle and had no other options. We enjoyed the trip very much but felt blind sided by this additional charge.

Really nice tour guide was very knowledgeable about the river ,Patrick Was our driver ,he had a nice van and drinks for was and very helpful with us very attentive to our needs.Valerie USA

We had heard about this experience...

We had heard about this experience from friends who had done the same tour a few years ago. Our pick up was prompt and on time and our driver was very friendly. We were lucky enough to be the only ones in the car so we could ask the driver plenty of questions regarding Jamaica on our 30 minutes drive from our hotel to the Sanctuary. The road up to the sanctuary is quite bumpy and steep and you will have a moment where you'll think where on earth are we going, but once you arrive you will enjoy the peacefulness and calmness of the sanctuary. Admission was 20 each which we thought was quite a lot but the experience was good. You can sit and feed the hummingbirds for as long as you want and enjoy the birds and plenty of other bird species too! coming and going. The hummingbirds are beautiful and if you love bird-watching this is definitely a place worth visiting.

This was our favorite experience of...

This was our favorite experience of 5 excursions we had in Jamaica. It was an almost spiritual experience to have the birds land and feed was incredible. We will never forget it!

Due to the full moon, the experience...

Due to the full moon, the experience was a complete disappointment. I recommend only doing this tour when there is a new moon and it is very dark. Also, too many people around the boat kicking up mud from the bottom obscured the lights.

The 50 only covers the ride up and down the hill. The Fee for the bird sanctuary is 20. The hummingbirds were beautiful, but not that numerous because of the rain. The host was very nice and knowledgeable. I am not sure I would book it again.

Great places to visit - definitely worth the money doing this tour, as there was a lot of driving so probably wouldn't have managed to go to all of these places on our own. Let go of the rope and jump off at YS Falls! It's thrilling be very careful of the sharp rocks you fall onto/walk on though!. Tour guide a bit miserable, but would do this tour again.

Hello! Did not enjoy this trip. It was...

Hello! Did not enjoy this trip. It was overshadowed by shadiness on the part of Viator. Went online to look at zipline tours. Paid 120 USD. It wasn't until I printed out the voucher to find I really just purchased a glorified taxi trip and had to pay and additional 200 to actually go zip lining. This is our birthday trip and my graduation trip. We used all our money to get down here... there was not enough money in the budget for this. I felt the only person who really cares was the zip lining tour guide, Robbie who was incredible. Wish I had money left over to tip him, the driver, and to buy a souvenir... I went over all the sign in process again and there is no mention of a park fee. My next stop on this is to write Trip Advisor. You can make this right with us. I feel there has to be consequences for your shadiness.

This is an amazing tour! I have...

This is an amazing tour! I have never been in cleaner, more gorgeous water. Little T is an excellent guide. He makes the day fun and adventurous. This is a very special area of Jamaica, Patrick from VIP Jamaica Tours is an excellent driver. He knows a lot about the island, as well as other attractions you may want to see once your visit to Blue Hole is complete. Not to be missed!

It was an amazing excursion!! The...

It was an amazing excursion!! The Hummingbirds were great and it was really exciting when they landed and drank from the little bottles.
I highly recommend this excursion to anyone who is into nature and birds of course, and the tour of the property was very enlightening to see all of the natural shrubbery around. I left with different leaves from local flora in my pockets, pimento, lemongrass, and even a couple of scotch bonnet peppers!!
Two thumbs up!!!

We had chosen the 10:00 am 2 hour trip as we were due to fly home this afternoon and this fitted in well with our itinerary.We were picked up on time from the cruise terminal by our driver Patrick. We were soon at the roadway up the hillside which we had heard was pretty rough but Patrick told us that there had been some repair work done on the worst of the potholes and the ride up was not bad at all! We were met by the covered patio area where 5 or 6 chairs were line up for visitors to sit on. Before we were even given the bottles of sugar-water, there were three or four Streamer-tails darting about. As soon as we were seated they began to approach and soon they were perching on our fingers and drinking! What a wonderful experience to have these sparkling, glittering gems of nature so close! Several other visitors arrived and they were soon as delighted as we were with this amazing display! There were plenty of other birds at the seed and fruit feeders, Bananaquit, Orangequit,Yellow-Faced and Black-Faced Grassquits, Caribbean and Common Ground Doves and Jamaican Orioles, to name a few. Surprises, for me, were a Worm-Eating Warbler on the feeders and an Ovenbird as I strolled the garden. Fritz apologised for being unable to take me around as he had been ill recently but I was thrilled with what I'd seen and as there were some species I didn't get to see, I now have a good reason to return, which I will at some point. Just before we left, we took a seat on the side to have a chat, the other visitors had left by then and as we sat down, in came another Streamer-tail and a Jamaican Mango looking for another feed! All-in-all, this was an unmissable trip and one that will appeal to anyone with even a passing interest in the natural world. I saw young children and pensioners agog at what they were looking at here! In a word - brilliant!

Safety first was their motto and we...

Safety first was their motto and we felt safe and well taken care of. We are seniors and
Had a great time. Ziplines were wonderful! No botanical
gardens as such! But beautiful scenes. Thanks!