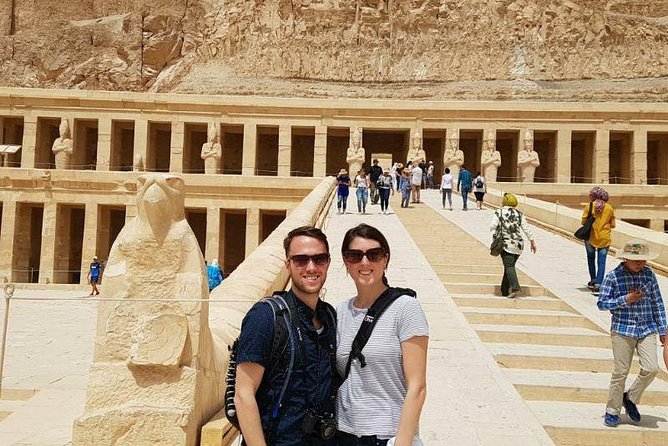 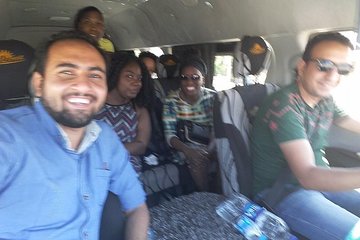 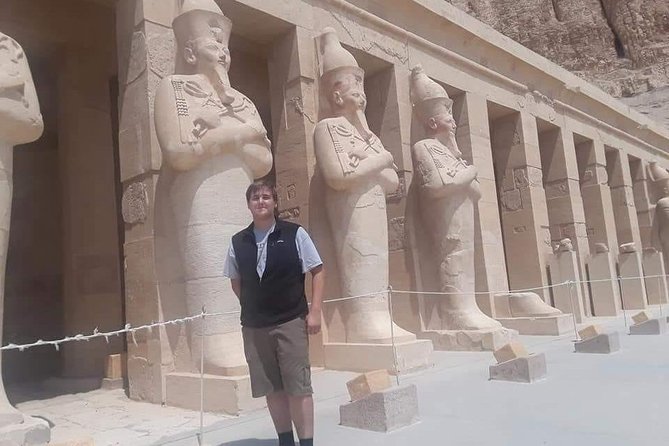 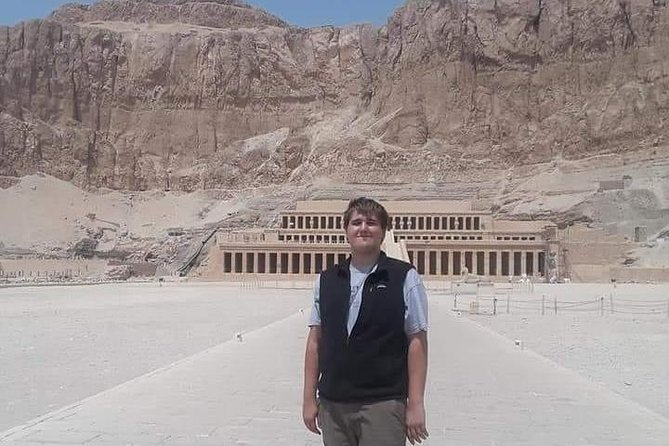 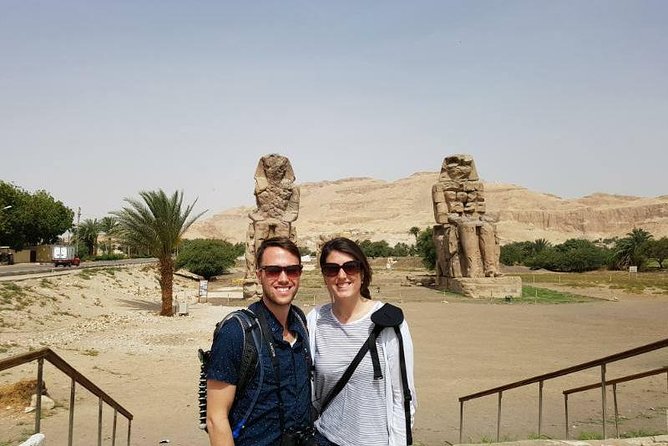 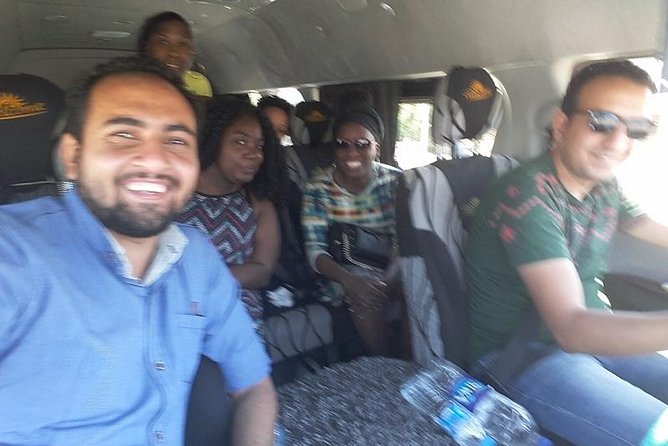 Bon
Giza pyramids ,camel ride ,quad bike night and dinner cruise on Nile | Mär 2020
This excursion was great until we had to endure visits to stores we were not interested in. It was obvious the guide was friends with the owners and was hoping we would purchase something. It was not part of the itinerary. Then she brought us somewhere for lunch, dudnt tell us it was a fixed price until we sat down and the price was definitely over its worth. First time on a quad bike....they didnt even provide helmets.
Mehr erfahren

S-DET
Guided Visit to Cairo's Khan el-Khalili Market | Mär 2020
We did not get the experience we paid for. Our guide was late and first took us to a separate shopping area, where we were given demonstrations at a perfume shop and a papyrus shop. While the demos were interesting, they left us feeling pressured to buy things we didn't want. This took up half of our scheduled time and it wasn't what we signed up for. We were not offered bottle water, we were not shown the inside of an old mosque, we were not offered a puff of flavored sheesha, nor told any history of the market, as listed in the tour description. Khan El Khalili market itself was great, we just wish we'd had more time to shop and visit El Fishawy for a snack. Our tour guide was friendly and helped translate while we were shopping. We could have easily taken a cab and shopped at our leisure without wasting money on this “tour”.
Mehr erfahren

Abdul_Hakim
Private Half-Day Tour to Giza Pyramids, Sphinx | Feb 2020
I and my wife Made half day tour of pyramids and pemphis. This was an excellent experience.our guide,Abla saif was very cooperative and informative.she was cooperative and dutiful as well. We enjoyed whole of it.
Mehr erfahren

gtdavidson11
airport pick up or drop off between Cairo/Giza and Cairi airport or return | Jan 2020
The driver was very prompt in responding to my request and contacting me directly. Very good communication regarding the pickup process, etc. He was at our hotel on a timely basis, and we had a very pleasant drive to the airport. Everything worked well.
Mehr erfahren

WorldVagabondxplorer
half day sakkara step pyramids and Memphis city tour | Jan 2020
Ehab is a knowledge repository as he is not only an egyptologist but also an archaelogist. He explained each and everything without even being asked. He is epitome of patience and let us explore Sakkara and Memphis as much as we liked. We were lucky to have him as he explained everything by taking us through the pyramids, tombs and museums and then let us explore. With him you just expect knowledge and no nonsense, yet he was courteous enough to take our pictires when we asked. It was an unforgettable experience.
Mehr erfahren

Great tour of the market with Abla!

NH_Happy_Wanderer
Guided Visit to Cairo's Khan el-Khalili Market | Dez 2019
Abla was very knowledgeable and took us to get exactly what we wanted. She was upbeat, friendly and had a great sense of humor. I highly recommend.
Mehr erfahren

csavery20182019
Guided Visit to Cairo's Khan el-Khalili Market | Dez 2019
Theresa did such an amazing job showing us around the very busy market and was great translating for us. She didn’t rush us and the car was always ready and waiting for us. Such a fun tour with her and easily extended the tour to see Citadel a must see on the way back from market. Thank you Theresa.
Mehr erfahren

Patricia T
quad bike ATV ride around Giza pyramids | Nov 2019
Picked up by Ahmed in an immaculate SUV. He was very friendly and made us feel very comfortable. We rode the quads on our last morning in Cairo and it was really fun way to end a fabulous trip. Our time was 10 in the morning and it was overcast so we couldn't really see the pyramids that well. I suggest going later in the day to maximize the view.
Mehr erfahren

Don't. For the sake of your sanity, just don't.

Philip M
food tour in local Cairo life | Mai 2019
I booked this "food tour" in April 2019 and between then and the date of the tour, 23rd May, I received 61separate WhatsApp messages from the person organising this "tour". Anybody who has been to North Africa or parts of The Middle East will be familiar with being hustled by street vendors. You know the sort, they just will not take no for an answer. You walk off but they follow you down the street hustling, hustling, hustling. This was the modern, digital, equivalent of the same thing. Literally within minutes of booking the "tour" he had whatsapped me offering other tours, accommodation etc. I explained that my itinerary was already planned, booked and paid for to which he replied "Is OK, just cancel and you get refund and book with me". I declined but he wasn't about to give up. He hustled, hustled, hustled and just would not take no for an answer. I eventually stopped replying and got a message from him saying "why you not answer me?". In the end I had no choice but to block him on my phone. But worse was to come and that was the supposed "food tour". When we had originally booked the tour some 6 weeks earlier we booked it for late afternoon but on the evening befor e, and despite having had 6 weeks to inform me, he contacted me to say it could only be provided either in the morning or after 8pm because of Ramadan. I reluctantly agreed to 8pm despite the fact it clashed with other plans. On the evening we were picked up at our hotel by a driver and driven a 100mtrs to a family run Egyptian restaurant. We had in fact eaten there the night before and enjoyed it but on this occasion we were sat at a high table in the take away section and the driver placed 2 items in front of us, walked away and stood at his car smoking. No explanation as to what we were eating. No explanation about ingredients, spices, methods etc. Nothing. We were then driven for more than 30 mins across Cairo to a coffee shop. I am quite sure there are many, many, coffee shops within a stone's throw of the 1st place we eat without driving 35 mins across Cairo but again, we were given no explanation as to why this particular coffee shop. We were served a coffee each at an outside table and left to our own devices. After 30 mins sitting there with no communication from the driver we'd had enough of this nonsense and asked to be taken back to our hotel. Save yourself the hassle. Steer clear of this hustler, hucksters and shyster. Go elsewhere, your sanity will thank you.
Mehr erfahren

What a wonderful day and what a...

What a wonderful day and what a great experience! I visited with the Guide Rania and the Driver Ahmed the Pyramids and the Egyptian Museum. Two thumbs up - for the knowledge and the good driving through the Cairo traffic! I booked immediately a second tour for the next days! I feel save every moment - come to Egypt, visit Cairo with this agency!!!

The tour was good and efficient. The...

The tour was good and efficient. The driver and the guide were very friendly. I think more information could have been given about the sites though. The one thing that I don’t like about these tours (Egypt, India, in particular) is being driven around to different ‘shops’ to purchase items.

Our tour guide Muhammad took us...

Our tour guide Muhammad took us around the market and let us stay as late as we would like without rushing us, he even went driving around the city looking for specific stores for things I wanted to buy but could not find, you can go see the markets with any company and it will all be the same but our particular guide Muhammad is what made the difference. strongly recommend this tour and this company only with the request to have Muhammad as your guide. If they are uncertain which Muhammad you are referring to you can request Muhammad from Libya.

tour was ok but restaurant that the...

tour was ok but restaurant that the guide forced us to have lunch at was terrible,dirty and disgusting attitude from the waitors and manager. Nothing to do with the tour guide or company...they were 'ok'.