Welcome to Viator!
By creating an account, you agree to our Terms & Conditions and Privacy Policy.
We're creating your account. This may take a few seconds...
Account creation successful! Thank you.
Something went wrong. Please try again on the sign up page.
Questions? (888) 651-9785(888) 651-9785
When are you travelling?
Select Dates
Recommendations
All Recommendations
How to Spend 3 Days in Bavaria
How to Spend 3 Days in Nuremberg
Ways to Beat the Crowds in Munich
Culture Lover’s Guide to Munich
Sightseeing on a Budget in Munich
Art Lover’s Guide to Munich
Where to Find the Best Views in Munich
Price
USD0
USD500+
Duration
Time of Day
RatingClear
Specials

How to Spend 3 Days in Bavaria 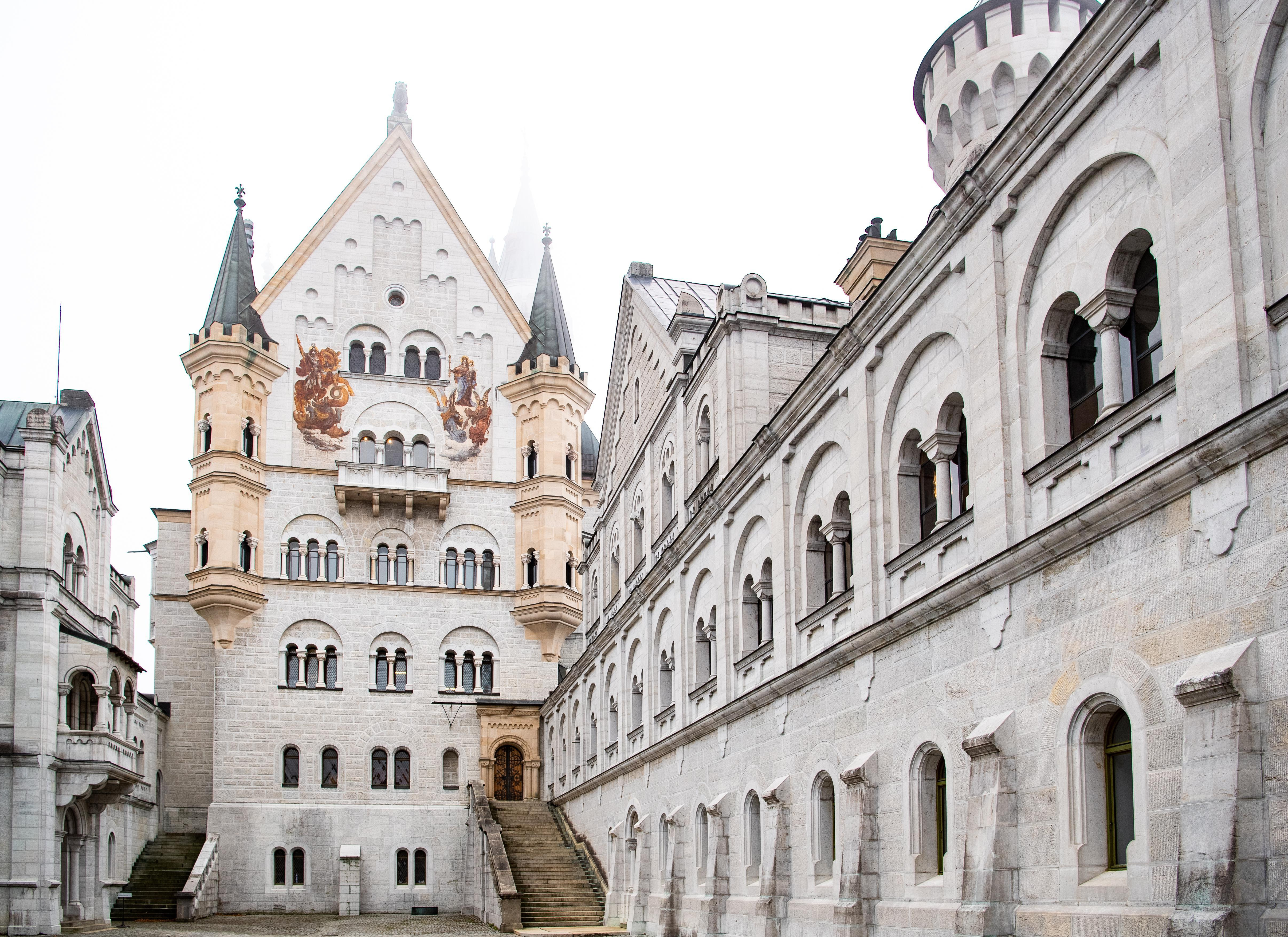 Three days in Bavaria are just enough time to take in the highlights of Germany’s mountainous southern state. Combine sightseeing with beer tasting in Munich; discover the storybook villages and fairy-tale castles of the Romantic Road; and marvel at the wild landscapes of the Bavarian Alps. Here’s how.

Famous for its beer-brewing heritage and world-renowned Oktoberfest, Munich is the obvious place to start. Get to know the Bavarian capital on a walking, biking, or Segway tour—or check off the sights at your own pace on a hop-on hop-off bus. Must-see landmarks include the New Town Hall (Neues Rathaus), St. Peter’s Church (Peterskirche), and Frauenkirche cathedral. Afterward, stroll the English Garden, or wander the stalls at the lively Viktualienmarkt market. For dinner, tuck into traditional Bavarian fare like pork knuckle, pretzels, and spaetzle at one of Munich’s legendary beer halls or beer gardens, such as the Hofbräuhaus. Join a beer-tasting experience for an introduction to local favorites and insight into Bavaria’s beer-making legacy.

Head south to admire the snow-blanketed peaks and lush valleys of the Bavarian Alps. The most impressive route is part of the German Alpine Road, which runs from Lake Constance to Berchtesgaden. Along the way, stop at Neuschwanstein Castle, built by the “Mad” King Ludwig II and one of Bavaria’s most photographed sights—prebook skip-the-line tickets to save time. Day tours from Munich often include visits to attractions such as Linderhof Palace (another of Ludwig II’s creations) and Hohenschwangau Castle (his childhood home).

Set out on one of Europe’s most picturesque routes, the 220-mile-long (354-kilometer-long) Romantic Road, which runs from Füssen in the south to Würzburg in the north. It’s possible to travel the most scenic stretch—between Augsburg and Rothenburg ob der Tauber—in one day. Join a tour to make the most of your time, as public transit is limited along the Romantic Road. Photo ops are around every corner, so take time to stop in the villages of Donauwörth and Dinkelsbühl and see the 11th-century Harburg Castle. Rothenburg is the route’s star, a remarkably preserved medieval town where you can browse artisan shops and walk the old city walls and cobblestone streets. Don’t miss the Käthe Wohlfahrt Christmas Shop, open year-round.

14 Tours and Activities | All Bavaria Tours

636
Add a bit of legend and enchantment to your German vacation with a full-day trip to Neuschwanstein and Linderhof from Munich. Relax for the scenic coach ride through the Bavarian Alps, then spend hours exploring the former royal residences, sources of inspiration for modern fairy tales like Walt Disney's Sleeping Beauty. In your small group, tour the castle’s opulent halls, unique spaces and the incredible kitchens. Conclude with free time in the charming village of Oberammergau.
…More
From
USD175.11
From
USD175.11
Face masks required for travellers in public areas
Face masks required for guides in public areas
Face masks provided for travellers
Learn More
Taking safety measures

60
Enjoy Oktoberfest in Munich during this full-day experience that includes a Munich city tour and a guaranteed spot inside a tent. Beginning with a walking tour, learn about the city’s history and brewing customs, and hear about the 200-year-old festival at Theresienwiese. Then, take a seat at your reserved place in one of the major Oktoberfest beer tents, where you receive two liters of beer and chicken.
…More
From
USD190.60
From
USD190.60

649
Admire the countryside, castles, and villages of Germany’s Romantic Road on a day trip from Munich. Enjoy a coach drive along the iconic Road, a famously picturesque route through Bavaria’s mountains and forests. Stop at 11th-century Harburg Castle, one of Germany’s oldest fortifications, and continue to Rothenburg, a beautifully preserved medieval town of cobbled lanes, squares, and half-timbered houses. See top attractions such as the Renaissance-era Town Hall, enjoy free time to wander, have lunch (own expense), and more.
…More
From
USD65.52
From
USD65.52
Face masks required for travellers in public areas
Face masks required for guides in public areas
Face masks provided for travellers
Learn More
Taking safety measures

798
Get a dose of Bavaria's iconic beer culture with this food and beer tour in Munich. Home of Oktoberfest and a collection of famous beer halls and beer gardens, Bavaria's beautiful capital invites visitors from around the globe with its promise of fun and camaraderie. Partner with a savvy guide for an insider look at this tradition of imbibing. You’ll hit local haunts and enjoy Bavarian nibbles in the company of fellow beer aficionados.
…More
From
USD51.22
From
USD51.22
Hand sanitiser available to travellers and staff
Social distancing enforced throughout experience
Regularly sanitised high-traffic areas
Learn More
Taking safety measures

37
Getting from Munich to Hitler’s Eagle’s Nest (Kehlsteinhaus) by public transport makes for a long day trip. Avoid stressing about connections or the hassle of arranging a rental car, and take this relaxing tour instead. Explore the Dokumentation Obersalzberg museum and Eagle's Nest at your expense, and stop at the alpine town of Berchtesgaden. A special bus and lift then take you up to the Kehlsteinhaus at an altitude of 1,834m where you will be rewarded with spectacular views. In the event of bad weather conditions (fog, ice, snow) which make a trip up to the Kehlsteinhaus impossible, we offer the visit of the Berchtesgaden salt mines as an alternative.
…More
From
USD62.31
From
USD62.31
Face masks required for travellers in public areas
Face masks required for guides in public areas
Face masks provided for travellers
Learn More
Taking safety measures

10
See Germany’s Romantic Road on a private day trip from Munich and discover its showpiece sights with ease. With your own private guide for a group of up to seven people, you’ll travel to Harburg Castle, Dinkelsbühl, and Rothenburg ob der Tauber, hearing about the history of the culture-rich route as you go. Free time to sightsee, shop, and explore is included at each stop.
…More
From
USD503.98
Price varies by group size
From
USD503.98
Price varies by group size
Face masks provided for travellers
Hand sanitiser available to travellers and staff
Social distancing enforced throughout experience
Learn More
Taking safety measures

345
First time in Munich? Take in the best bits of the Bavarian capital on this 2-hour walking tour of Munich’s Old Town. Admire architectural wonders like the Old Town Hall, St Peter’s Church and the Munich Residenz; stroll through the lively Viktualienmarkt; and see the world-famous Hofbräuhaus beer hall. Accompanied by an expert guide, you’ll have ample opportunities to learn more about Munich’s history, cultural heritage and beer-brewing legacy, while walking between the central squares of Marienplatz and Odeonsplatz.
…More
From
USD19.06
From
USD19.06
Hand sanitiser available to travellers and staff
Social distancing enforced throughout experience
Regularly sanitised high-traffic areas
Learn More
Taking safety measures

101
Visit the popular Neuschwanstein Castle on this guided walking tour. A “skip-the-line” ticket allows for quick access to the inside of the medieval masterpiece. One of three palaces built by King Ludwig II of Bavaria, it would eventually become the inspiration for the castle in Disney’s "Sleeping Beauty." After the tour, enjoy a horse-drawn carriage ride down to the village of Hohenschwangau and take a leisurely stroll around scenic Lake Alpsee.
…More
From
USD65.12
From
USD65.12
Hand sanitiser available to travellers and staff
Social distancing enforced throughout experience
Guides required to regularly wash hands
Learn More
Taking safety measures

123
Marvel at Munich’s monuments, parks, and famous beer halls on a hop-on hop-off bus tour. Combine the ease of a tour with the flexibility of independent travel and see the city sights at your own pace with a 24- or 48-hour pass. Choose from multiple routes that pass all the city’s most popular attractions including the Nymphenburg Palace, Odeonsplatz, and Olympic Park. Listen to the on-board audio commentary or jump off to explore the English Garden, stroll around lively Marienplatz, or enjoy a beer (own expense) at the legendary Hofbräuhaus beer hall.
…More
From
USD18.94
From
USD18.94

3
Many travelers skim the surface of cities they visit—seeing the sights and moving on. Connect with the true Munich on this private custom walking tour with a local. Tell them your wish-list, and let them bring the city alive, as a friend would. Get directions, cultural tips, and restaurant suggestions; discover off-the-radar sights, and get a meaningful take on the city that helps you get more from your stay.
…More
From
USD36.65
Price varies by group size
From
USD36.65
Price varies by group size
Face masks required for travellers in public areas
Face masks required for guides in public areas
Social distancing enforced throughout experience
Learn More
Taking safety measures

2
• Only newest Mercedes V-Class 2018 (e.g. V250d 4Matic long wheelbase max. 6 passenger + 8 lugagge pieces). • Full leather seats and rear climate control. • Professional drivers speaking all english (or other language on request) and are locally knowledgeable. • Child seat can be provided on request. Tour starts in the city area of Munich at the adress and time you will provide us. Our Chauffeur will take you in around 1,5 hours through the beautiful landscape of Bavaria to Garmisch-Patenkirchen and will be there at your disposal to take you after visiting the Zugspitze Mountain if you would like to the Linderhof Palace which is closeby or to an beautiful bavarian restaurant in the area to have an authentic bavarian lunch/dinner before driving to the Partnach Gorge. If you would like to explore some other places, you will be free to customize your tour as you like.
…More
From
USD852.32
per group
From
USD852.32
per group

75
Discover Nuremberg’s rich and storied past on a full-day bus and walking tour from Munich. Relax on the comfortable ride to Nuremberg, then take a guided tour of the city, famous as the epicenter of the Nazi propaganda campaign. See attractions like Congress Hall and historic old town, and learn about the birth of the Third Reich empire. Afterward, enjoy some free time to explore, sample local foods and snap souvenir photos.
…More
From
USD65.52
From
USD65.52
Face masks required for travellers in public areas
Face masks required for guides in public areas
Face masks provided for travellers
Learn More
Taking safety measures

94
Wind through Munich’s bustling neighborhoods and parks on a fun and educational Segway tour! On the self-balancing device, you’ll follow an expert guide through pristine gardens and vibrant markets, past famous residences and some of the city’s great museums. Along the way, take pictures, stop at favorite sites, and hear fascinating facts and stories about this contemporary city with ancient roots.
…More
From
USD85.77
From
USD85.77
Face masks required for travellers in public areas
Face masks required for guides in public areas
Hand sanitiser available to travellers and staff
Learn More
Taking safety measures

32
Get to know the best of Munich on this guided bike tour. Learn the history of this popular city while riding around its open parks, elegant plazas, meandering riverbanks and winding, medieval alleyways. This tour includes stops at gathering spots like Marienplatz, Königsplatz, the Odeonsplatz and ride through Englischer Garten, Europe’s largest city park. In the evening, enjoy a Bavarian beer and food tour. Use of a bike and helmet are included.
…More
From
USD84.58
From
USD84.58
Hand sanitiser available to travellers and staff
Social distancing enforced throughout experience
Regularly sanitised high-traffic areas
Learn More
Taking safety measures