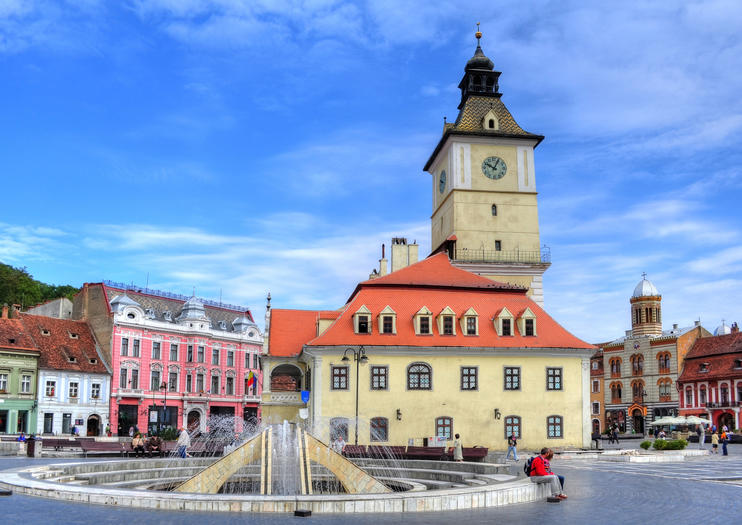 Located in the heart of old Brasov, Council Square (Piata Sfatului) is lined with beautiful Gothic, baroque, and Renaissance buildings. Home to a number of key landmarks, Brasov’s main square has been a focal point of life in the city since medieval times. It’s a popular gathering place and a great spot to soak up the scenery.

The Basics
Around Council Square, you’ll find the landmark Black Church, the former Council House (which now houses the History Museum), Hirscher House, the Orthodox Cathedral, the Museum of Urban Civilization, and the Casa Muresenilor Museum. Cafés, restaurants, and terraces line the square, which also has a large fountain in the middle. The square is also a popular location for gatherings, events, and festivals. Leading away from the square is the pedestrian-only Republicii Street, full of cafés, restaurants, and souvenir shops.

Nearly all tours of Brasov, including walking tours, will feature a stop here, along with other top attractions like the Black Church, St. Nicholas Church, and the First Romanian School. You can also visit as part of a sightseeing tour that also stops at some of Transylvania’s top attractions, including Bran Castle and Peles Castle.

How to Get There
Council Square is located at the center of Brasov. Brasov is about 100 miles (161 kilometers) north of Bucharest, in central Romania. By car, take the E60 from Bucharest to Brasov. It’s also possible to take a train or bus to get to Brasov from Bucharest and other major cities in Romania.

When to Get There
Council Square can be visited year-round. Summer is a pleasant time to visit, when many cafés and restaurants offer outdoor seating. A number of popular festivals and events are held at the square each year, including the annual “Golden Stag” (Cerbul de Aur) Festival in late summer.  September and November are also popular months for festivals, and a Christmas Fair is held in December.

5
The tour is currently suspended. Stay safe wherever you are! More than just a walking tour! Join me during this tour specially designed for the travellers who do not just want to see the sights but truly experience the destination. It includes the “must sees” of the old town of Brașov but also a ”special” place with a great view. The tour is based on a balanced walk/talk and a comfortable pace. During the tour you will: - Learn the essential things about Romania's history and culture - Listen to the dark stories of medieval Brașov and Count Dracula - Find out about communism and the Romanian revolution - Discover Romania's wildlife - Get familiar to the traditional Romanian dishes and taste the local candies - Find out about the best restaurants and pubs in the city - Get assistance and advice in planning your trip - must-see sights around Brasov and Romania Get off the beaten track to enjoy authentic local interaction and truly understand Brasov and Romania!
…More
From
USD16.18
From
USD16.18

Brașov under Communism and Tales from The Golden Age

Join me in a unique tour, specially designed for you to feel and explore the old communist atmosphere that you can still see in Brasov. Learn about the rise and fall of the Romanian dictator Ceausescu; Visit communist-era landmarks to see how the regime have left a permament mark on the city; Hear stories about daily life under Communist regime; Visit sites that played a key role in the 1989 revolution. The tour starts in the Council Square with a short introduction into the history of communist Romania. Then we shall go to the Revolution Square, a symbolic place for our frredom. Then we shall take a taxi to get to one of the most famous workers’ districts in Brasov, dating back to the 1930's. At present the old factory is part of o modern urban regeneration project, history and modern harmoniously blending. So, as a socialist slogan was saying: 'Travellers' of the World, Unite!' and join this tour to truly feel and understand the so called Golden Age of Romania.
…More
From
USD14.98
From
USD14.98

Good speciality coffee, funny and interesting legends, hidden statues, local snacks, a relaxed tour with friends. If you like detective movies then join me in discovering the finger print that time and people left on this beautiful city.
…More
From
USD17.98
From
USD17.98

7
Hello Hello! With your authorized local guide, during the tour, apart from the history of Brasov and the magnificent Black Church, you will find out the meaning of some buildings and their owners, the secrets of the Council Square, we visit the Catholic Church of St. Peter and Paul and some another hidden out there ... Also the love story of Vlad the Impaler in Brasov and why the Ecaterina Gate is called that. If curiosity beats you, come and discover this magnificent city. I wait for you!
…More
From
USD17.98
Price varies by group size
From
USD17.98
Price varies by group size

Things to do near Brasov