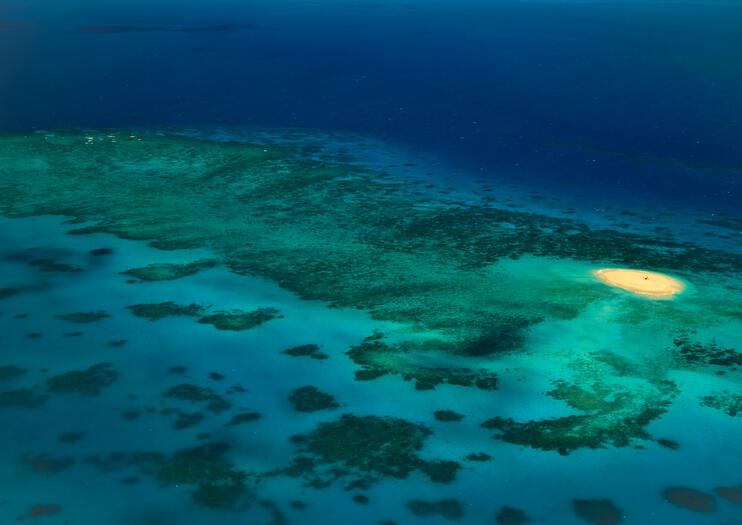 Part of Australia’s UNESCO-listed Great Barrier Reef, the sandy island of Michaelmas Cay—now a bird sanctuary and national park—is a nesting site for thousands of seabirds, from common noddies to sooty terns. Marine creatures such as leopard sharks, stingrays, and sea turtles also call the offshore coral reefs home.
The Basics
To reduce environmental impact, access to the island is limited to a small portion of the beach. Michaelmas Cay is typically visited on catamaran cruises from Cairns, which offer snorkeling and scuba diving, and are usually led by marine biologists who explain the unique environment of the coral cay and reef. See the reef without getting wet on a semi-submarine tour or, for an alternative perspective, take a scenic flight over the Great Barrier Reef.
Things to Know Before You Go
How to Get There
Michaelmas Cay is about 25 miles (40 kilometers) northeast of Cairns and is only accessible by boat. Travel time from the marina in Cairns is about two hours.
When to Get There
Unlike other cays, Michaelmas Cay is always above water, so you can visit regardless of the tide. The best time to observe birds is during the summer breeding season, while optimum scuba diving conditions occur between June and October, when there’s typically less rainfall and therefore better visibility.
What Else to See in Australia’s Great Barrier Reef
With some 900 islands and thousands of reefs, the Great Barrier Reef offers an abundance of marine treasures. If you’re based in Cairns, take day cruises to other Great Barrier Reef destinations; top picks include the easy-to-access Green Island—ideal for time-tight or budget travelers—and the far-flung Hastings Reef, a colorful coral garden in the Outer Barrier Reef.
Address: Cairns, Queensland, Australia
Read MoreShow Less

43
Enjoy incredible views of the Great Barrier Reef from the air during a 30-minute scenic flight from Cairns. See highlights such as Green Island, Upolu Cay, Oyster Reef, Arlington Reef, Vlassof Reef and Michaelmas Reef, taking in the sights as your guide points out the landmarks below. You also fly over Cape Grafton, False Cape, Double Island and Palm Cove and other Northern Beaches, with the route changing depending on the day’s conditions. Everyone has a window seat, allowing unobstructed viewing of this UNESCO World Heritage-listed natural wonder.
…More
From
USD156.63
From
USD156.63
Face masks provided for travellers
Hand sanitiser available to travellers and staff
Social distancing enforced throughout experience
Learn More
Taking safety measures

85
Discover the underwater treasures of the Great Barrier Reef on this full-day catamaran cruise to Michaelmas Cay from Cairns. Snorkel straight from the white sandy beaches to swim among amazing coral gardens and get an up-close encounter with tropical marine life. Go deeper with an optional introductory scuba dive, or admire the reef on a semi-submarine boat tour. Chat with marine biologists to learn about the thousands of migratory seabirds that nest on the protected cay, and refuel with a buffet lunch featuring fresh seafood.
…More
From
USD177.89
From
USD177.89
Hand sanitiser available to travellers and staff
Regularly sanitised high-traffic areas
Gear/equipment sanitised between use
Learn More
Taking safety measures

8
Venture out to the Outer Reef of the UNESCO-listed Great Barrier Reef marine park on this full-day cruise to Michaelmas Cay from Cairns. Sail to the island by catamaran, accompanied by a marine biologist guide, then discover the sandy beaches, vibrant corals and colorful sea creatures as you swim and snorkel around the coast. Opt to try scuba diving, head underwater in a semi-submersible submarine or spot an array of seabirds, then tuck into a delicious buffet lunch (included) on-board.
…More
From
USD207.80
From
USD207.80
Hand sanitiser available to travellers and staff
Regularly sanitised high-traffic areas
Gear/equipment sanitised between use
Learn More
Taking safety measures

417
Ensure a memorable experience on the Outer Great Barrier Reef on this full-day, all-inclusive cruise aboard a catamaran. Head for Michaelmas Cay and Hastings Outer Reef and plunge into the underwater world of the Great Barrier Reef by snorkeling amongst its rich marine life. If you have selected the option, you can also include an introductory or certified dive. Includes morning and afternoon tea, as well as a buffet lunch.
…More
From
USD169.23
From
USD169.23
Hand sanitiser available to travellers and staff
Regularly sanitised high-traffic areas
Gear/equipment sanitised between use
Learn More
Taking safety measures

Things to do near Cairns & the Tropical North

Recommended for Cairns & the Tropical North