How to Spend 1 Day in Chongqing 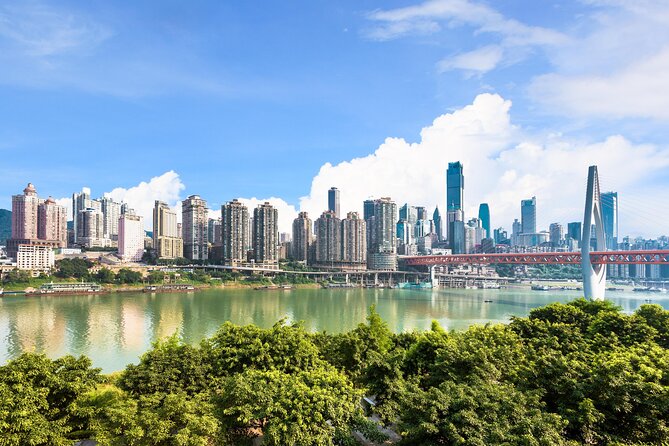 This sprawling metropolis of more than 30 million people ranks among the most multifaceted cities in western China—a former walled city turned modern destination at the confluence of two rivers. A day is just enough to give you a taste of Chongqing. Read on for tips on how to spend your time.

There’s a lot of ground to cover in the hilly city of Chongqing, so let a guide lead the way. Sightseeing tours around town often cover the most important landmarks and attractions; take in the views of the Yangtze and Jialing rivers from Eling Park, visit a thousand-year-old Buddhist temple wedged between modern skyscrapers, and see some of China’s most famous residents—its giant pandas—at the Chongqing Zoo. If you have spare time, wander the cobbled streets of Ciqikou, a small neighborhood known for its Sichuan-style architecture.

Many full-day tours of Chongqing include a visit to one or two of the city’s museums, but you can also stop by on your own. The Chongqing Museum offers an introduction to the region through its collection of more than 100,000 artifacts spanning 3,000 years. Another favorite, especially among American visitors, is the General Joseph W. Stilwell Museum, housed in the general’s former residence and headquarters. Those planning to cruise the Yangtze River won’t want to miss the Three Gorges Museum.

No trip to Chongqing is complete without dining on a regional specialty, hot pot (huoguo). This popular Sichuan dish, made by cooking a variety of meats and vegetables in a bubbling vat of fiery broth, is served in street stalls and restaurants all along Huoguo Jie (Hot Pot Street). Milder versions are available on request. Night owls can continue their day into night at one of the bars or clubs clustered along Bayi Lu.

4 Tours and Activities | All Chongqing Tours

Get the most out of your time in Chongqing by going on a private day tour. A private tour will enhance your experience, with better access to your guide for questions and a more personalized experience. After a hotel pickup, travel between attractions in a comfortable vehicle. Highlights include the People’s Auditorium, Eling Park, Porcelain Village, and Hongyadong Block.
…More
From
USD180.40
Price varies by group size
From
USD180.40
Price varies by group size
Face masks required for travellers in public areas
Face masks required for guides in public areas
Learn More
Taking safety measures

From Chongqing: Port Transfer with Half Day Tour and Hot Pot Dinner

Experience the awe-inspiring Chongqing Zoo on a private half-day tour with a personal driver. After a convenient pickup at your downtown hotel or river cruise ship, travel in a comfortable, air-conditioned car to the city’s 110-acre (44-hectare) zoo. Visit the Panda House for an up-close encounter with China’s famous Giant Pandas.
…More
From
USD90.63
Price varies by group size
From
USD90.63
Price varies by group size

2
Discover the buzzing metropolis of Chongqing with this half- or full-day tour and make the most of a private guide and flexible itinerary. Look out over the Yangtze and Jialing rivers from the mountaintop Eling Park, then learn more about the city’s fascinating history at the Chongqing Museum. On a full-day tour, including lunch, you’ll also have chance to tour the General Joseph W Stilwell Museum, see the beautiful Arhat Temple, and get up close to pandas at Chongqing Zoo.
…More
From
USD157.00
Price varies by group size
From
USD157.00
Price varies by group size
Face masks required for travellers in public areas
Face masks required for guides in public areas
Face masks provided for travellers
Learn More
Taking safety measures