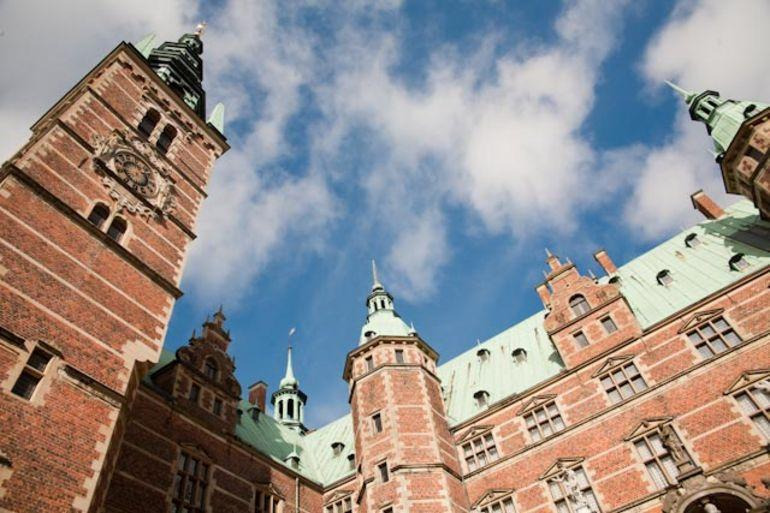 With some of Northern Europe’s most beautiful and romantic castles scattered throughout Copenhagen and its surrounds, castle addicts are sure to adore the Danish capital. Here’s how to experience some of Copenhagen’s castles, either on a city walking tour or as part of a castles tour outside of the city.

Home to the oldest royal family in the world, Amalienborg Palace is also known for its beautiful palace square and its royal guard, the Den Kongelige Livgarde. Experience the Changing of the Guard daily as they march from their barracks at Rosenborg Castle through the streets of Copenhagen to Amalienborg Palace. Tour the palace museum to get a glimpse into the life of the royal family.

The Dutch Renaissance–style Rosenborg Castle, originally built as a country summerhouse in 1606, is a prime example of King Christian IV’s many architectural projects. Today visitors can learn about Danish history and culture while touring the castle and the impressive possessions—including the dazzling Crown Jewels—of the king and his descendants. The castle garden is the oldest and most visited park in Copenhagen.

Originally a hunting seat for King Frederik IV in the early 18th century, this palace—set in a beautiful park bordering Esrum Lake—is often the setting for the royal family’s important life events. The queen also receives visiting heads of state at Fredensborg.

Head north through the Danish countryside and you’ll reach Kronborg Castle, a magnificent Renaissance castle and UNESCO World Heritage Site. Made famous as the setting of Shakespeare’sHamlet, the castle sits at the head of Oresund Sound near the town of Helsingor and hosts a Shakespeare Festival each summer.

9 Tours and Activities | All Copenhagen Tours

835
Get the best from Denmark’s charm-laden capital for less with the great-value Copenhagen Card. Choose a 24-, 48-, 72-, 96-, or 120-hour card, and use it like your very own Copenhagen pass: enjoying a plethora of savings and benefits that help you make the very most of this beautiful city. Gain free entry to top Copenhagen attractions, including the legendary Tivoli Gardens and awesome Den Blå Planet aquarium; get valuable discounts on select tours, museum tickets and more; and enjoy free, unlimited use of the city’s public transport networks.
…More
From
USD76.52
From
USD76.52

62
Enjoy the must-see sights of Copenhagen on a small-group tour of the city limited to 16 people to provide a more intimate sightseeing experience. With a driver and guide, check out attractions like Christiansborg Palace, the Little Mermaid, and Nyhavn, plus enjoy a cruise on the canals.
…More
From
USD166.74
From
USD166.74

563
Uncover the mysteries behind the fairy tale castles of Copenhagen on a full-day tour of North Zealand, a beautiful region just outside the Danish capital. With a guide, visit Kronborg Castle, a castle made famous as the setting of Shakespeare’s ‘Hamlet’, and delve into the intriguing history of the fortress. Then, admire the architecture of Fredensborg Palace, residence of the Danish royal family, and the ancient Frederiksborg Castle.
…More
From
USD132.35
From
USD132.35

Bus & Boat Hop On Hop Off in Copenhagen

333
Explore the historical highlights and cultural delights of Copenhagen by both bus and boat on a hop-on hop-off tour of the Danish capital. Mix and match multiple interconnected sightseeing routes to see all of the city’s spectacular sights; whenever an attraction captures your attention, hop off to find out more and then rejoin the route at a time and stop convenient to you. Tickets are valid for 48 hours from first use and can be used on both the double-decker bus and the open-air boat.
…More
From
USD42.97
From
USD42.97

601
Discover why they call it 'Wonderful Copenhagen' on this City Sightseeing hop-on hop-off tour of Denmark's postcard-pretty capital. Choose from three routes and stay aboard to gaze at the sights, or hop on and off at any stop to explore on foot. Listen to the interesting onboard commentary; admire must-sees such as the Little Mermaid statue and Amalienborg Palace; and hop off to visit attractions such as the Tivoli Gardens and more. Your ticket is valid for 72 hours from first use.
…More
From
USD39.57
From
USD39.57
Hand sanitiser available to travellers and staff
Social distancing enforced throughout experience
Regularly sanitised high-traffic areas
Learn More
Taking safety measures

14
Copenhagen is famous for its picturesque cobblestone streets, historic castles, and 17th-century architecture. While driving can be difficult in Denmark’s capital, this private walking tour allows you to bypass traffic, explore Copenhagen’s most popular districts, and see the city’s famous castles, squares, and gardens—all with the full attention of your guide and no unknown guests.
…More
From
USD250.00
per group
From
USD250.00
per group
Social distancing enforced throughout experience
Learn More
Taking safety measures

10
Immortalized in print as the setting of Shakespeare’s Hamlet, Kronborg Castle (also known as Hamlet Castle) is one of Denmark’s top attractions and a convenient day trip from downtown Copenhagen. This private tour provides an in-depth exploration of the UNESCO-listed castle, its history, and Danish culture—with the full attention of your guide and no unknown guests.
…More
From
USD300.00
per group
From
USD300.00
per group
Social distancing enforced throughout experience
Learn More
Taking safety measures

3
See the best of Copenhagen on this private walking tour. As you explore, hear historical tales and facts about Denmark’s capital, and admire sights including the Little Mermaid and Amalienborg Palace. Absorb the maritime air and lively atmosphere, and discover other must-sees including the Tivoli Gardens and Nyhavn. As a private tour, the itinerary can be tailored around you. Hotel pickup is included, while cruise port pickup and drop-off is an additional cost.
…More
From
USD270.00
Price varies by group size
From
USD270.00
Price varies by group size
Face masks required for travellers in public areas
Face masks required for guides in public areas
Social distancing enforced throughout experience
Learn More
Taking safety measures

3
There are many tours that go inside Rosenborg Castle, but regular tours can sometimes have up to 30 in them, making it hard to get your questions answered along the way. This private Rosenborg Castle tour is just for you and your private group. Follow your guide through the castle as you learn about its history, and get personal attention. Plus, this tour is near other Copenhagen attractions, so you can fit in more sightseeing before or afterward.
…More
From
USD200.00
per group
From
USD200.00
per group
Social distancing enforced throughout experience
Learn More
Taking safety measures