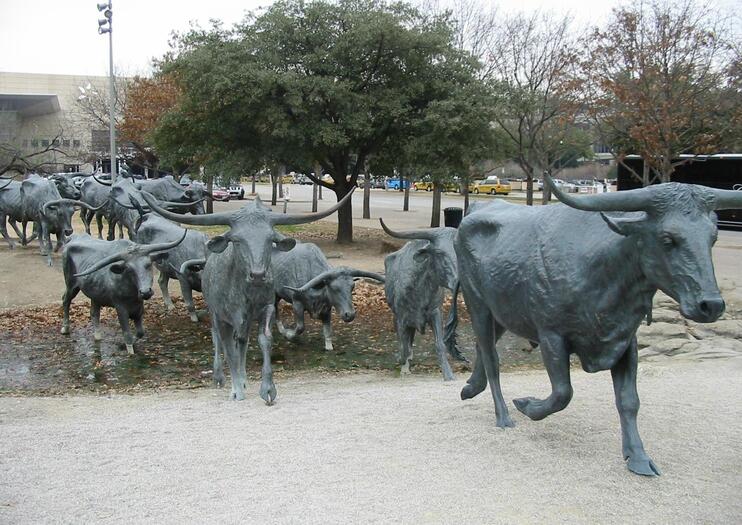 Pioneer Plaza, located in downtown Dallas’ Convention Center District, honors the 19th-century cattle drives on the Shawnee Trail with a bronze sculpture of 49 longhorn steer driven by three cowboys on horseback. With a waterfall and artificial cliffs, the park is one of the most popular tourist spots in Dallas.
The Basics
The highlight of Pioneer Plaza is the larger-than-life bronze cattle-drive sculpture by Texas artist Robert Summers. The steer, each of which stands 6 feet tall (1.8 meters tall) and contains realistic details, appear to be traveling across a flowing stream, roaming the Texas landscape just as they did in the 1800s. Several guided tours stop here to allow you to take photos and learn more about the area’s history.
Things to Know Before You Go
How to Get There
Pioneer Plaza covers 4.2 acres downtown at Young and Griffin streets, near the Kay Bailey Hutchison Convention Center Dallas and adjacent to Pioneer Cemetery. Within 1 mile (2 kilometers) are such major attractions as the Sixth Floor Museum, Dealey Plaza, and the Dallas Museum of Art. The park is easily accessible by car, less than one-half mile (0.8 kilometers) north of Interstate 30. By public transit, take a DART bus to Young and Griffin.
When to Get There
For the best photos, visit Pioneer Plaza during the day. The sculpture is a popular photo spot, and weekdays are less crowded than weekends (watch for tour buses unloading here). Spring and fall offer the most pleasant temperatures for visiting Dallas, while peak summer heat makes for some hot bronze statues baking in the sun.
Don’t Have a Cow, Man
When the sculptures were first installed in Dallas in the mid-1990s, local residents caused an uproar over their historical inaccuracy—neighboring Fort Worth, not Dallas, claims the “cowtown” heritage. A group of local artists even tried to bring a lawsuit to stop the project from moving forward. Today, however, the statues are so beloved by visitors that they are the second-most visited site in Dallas (after Dealey Plaza).
Address: 1428 Young Street, Dallas, Texas, USA
Read MoreShow Less

57
See the sights of Dallas on this small-group tour. Traveling with a guide who provides insider knowledge as you go, you'll check out attractions such as Pioneer Plaza, Dallas City Hall (designed by I.M. Pei), the Dallas Arts District, and Dealey Plaza, where JKF was shot. Plus, choose a morning or afternoon departure time to easily fit this tour into your schedule.
...  More
From
USD58.45
From
USD58.45
Learn More

55
Expect only the best of times on this tour of two Texas cities. Get acquainted with Dallas and Forth Worth on a tour that takes you to both cities' main attractions, such as the JFK Memorial and the Cowtown Museum. This tour includes all transportation in an area that's difficult to navigate without a car,.
...  More
From
USD123.07
From
USD123.07
Learn More

33
Get an overview of Dallas during this whirlwind small-group tour of the city's highlights. Hear live commentary from your guide as you ride in a comfortable minivan past landmarks such as the Old Red Museum, Pioneer Plaza, and Dallas City Hall. Learn more about the life and death of President John F. Kennedy as you see Dealey Plaza and the JFK Memorial. With a choice of morning or afternoon departure, and a short running time, this tour is easy to fit into your schedule.
...  More
From
USD28.71
From
USD28.71
Learn More

11
Discover the highlights of Dallas and Southfork Ranch on a 6-hour excursion that combines these two popular tours. See city landmarks such as the JFK Memorial, Pioneer Plaza, and the Old Red Courthouse as your guide shares commentary about the sights and Texas history. Afterward, continue to Southfork Ranch, home to J.R. Ewing and family on the popular American TV show 'Dallas.' The small-group tour is limited to 11 people, which allows for a more personalized experience.
...  More
From
USD130.76
From
USD130.76
Learn More

93
See the sights of Dallas—both the well known and the hidden gems—on a city tour with a guide. You'll listen to narration about Dallas as you make stops for photo ops and drive through neighborhoods like downtown and Highland Park.
...  More
From
USD59.99
From
USD59.99
Learn More

6
Combine two popular Dallas tours for a day of sightseeing that covers the city and the Dallas Cowboys Stadium. The small-group tour starts with an overview of city landmarks such as Pioneer Plaza, the JFK Memorial, and the Old Red Courthouse, then continues with a guided tour of the Dallas Cowboys stadium. You'll see the press box, locker rooms, private suites, and post-game interview room, and you can step onto the field to throw a football.
...  More
From
USD149.74
From
USD149.74
Learn More

6
See the top sights of Dallas in a short time on this private tour. Head to Pioneer Plaza, and the Arts District, and take a walk on Main Street. When you visit the historic West End and Dealey Plaza, learn more about the assassination of President Kennedy in 1963. You can also get photo ops of historical buildings and picturesque homes on a tour that includes airport or hotel pickup and drop-off.
...  More
From
USD51.29
From
USD51.29
Learn More

Discover Dallas fascinating history, incredible architecture, and unrivaled charm. We will walk around two miles. Our journey starts at the West End Historic District, the oldest part of the city, we will visit Dealey Plaza, the Grassy Knoll, the Old Red Court House, and Founders' Plaza. Revisit the fascinating details of the JFK assassination and hear about the city's beginnings and its founder. Further down our route, we will visit the former Dallas Morning News headquarters, the famous Mobile Oil Pegasus (the original one!) and the spectacular Pioneer's Plaza which features larger-than-life bronze sculptures, a re-creation of a Texas cattle drive, with Texas longhorn steers being driven by three cowboys astride horses! The second leg of our walk will take us through Main Street's incredible architecture and rich history. The last segment of our excursion covers the Arts District (the largest of its kind in the US).
...  More
From
USD39.99
From
USD39.99
Learn More

11
Explore Dallas in a stretch limo on a small-group tour that combines city sightseeing with historical details about President Kennedy’s assassination. Hear commentary from your driver-guide about landmarks such as John F. Kennedy Memorial Plaza, Pioneer Plaza, and Dallas City Hall, and learn more about the assassination when you go through the Dealey Plaza National Historic Landmark District and other important sites.
...  More
From
USD58.45
From
USD58.45
Learn More

1
Ride along with us as we take you on a tour of Downtown Dallas. Visit the original town square where it all began in 1841. Listen as our guide points out the major architectural landmarks, and tells the story of Dallas' rich and prosperous history from its humble beginnings. Our tours take place on open element, fun and eco-friendly carts that allow the riders to engage their surroundings. Taking pictures is easy from our platform and drivers will be glad to stop and dismount for additional pics upon request.
...  More
From
USD25.65
From
USD25.65
Learn More

4
Discover Dallas with your own private guide on a 3-hour tour that focuses on the city's history and top sights. Customize the itinerary to your interests to take in the landmarks and sites that you would most like to visit, at the departure time of your choice. Among the possibilities, you can learn about the bronze statue collection in Pioneer Plaza, admire the architecture of I.M. Pei at Dallas City Hall, and visit key sites related to the assassination of President John F. Kennedy.
...  More
From
USD345.95
per group
From
USD345.95
per group
Learn More

Private Sightseeing Tour of Dallas and Fort Worth

Every person who books with Explore Dallas Tours will be accompanied by an experienced tour guide who has conducted more than 700 tours since 2010. As a sixth-generation Texan and a resident of Dallas since 1985, John conducts each tour with personal awareness and familiarity. He believes in sharing the exciting lifestyle associated with Dallas' city museums, performance halls, academic institutions, and restaurants.
...  More
From
USD179.49
per group
From
USD179.49
per group
Learn More

17
Dallas is one of the largest and most diverse metropolises in the United States, and it can be hard for travelers to know where to start. This private tour is ideal for first-time visitors or those short on time, providing a comprehensive introduction to Dallas’ highlights. Visit the Kennedy Memorial and learn more about one of the most notorious moments in US history; discover Dallas’ sporting heritage as you see the American Airlines Center in Victory Park; and visit city neighborhoods including the West End Historic District, the Dallas Arts District, and Turtle Creek Park.
...  More
From
USD90.00
Price varies by group size
From
USD90.00
Price varies by group size
Learn More

1. In-Depth sightseeing within most of attractions. Get to know why Everything is bigger in Texas or Texas size. 2. Hotel breakfast included every day, enjoy the breakfast before we start the tour. 3. Stay in French Quarter District hotel, most value! 4. Guests will have a chance to see the NBA games. 5. Learn the spirit of “Cowboy culture”, have a taste of “Texas Steak”. 6. Visit University of Texas at Austin. 7. Gulf of Mexico Dolphins Cruise, NASA Space Center. 8. Texas State house and military museum.
...  More
From
USD958.00
Price varies by group size
From
USD958.00
Price varies by group size
Learn More

3
A unique guided tour of downtown Dallas in our all electric Cruizers. We have brought these tours back after numerous requests.
...  More
From
USD24.99
From
USD24.99
Learn More

Our Great Dallas Tour includes the rich history and culture Dallas has to offer. Dallas started as a small trading post and has grown to the Great city we have today. The tour includes famous and exciting sights. There will be stops along the way for those perfect and must have photo memories.
...  More
From
USD45.00
From
USD45.00
Learn More

Things to do near Dallas