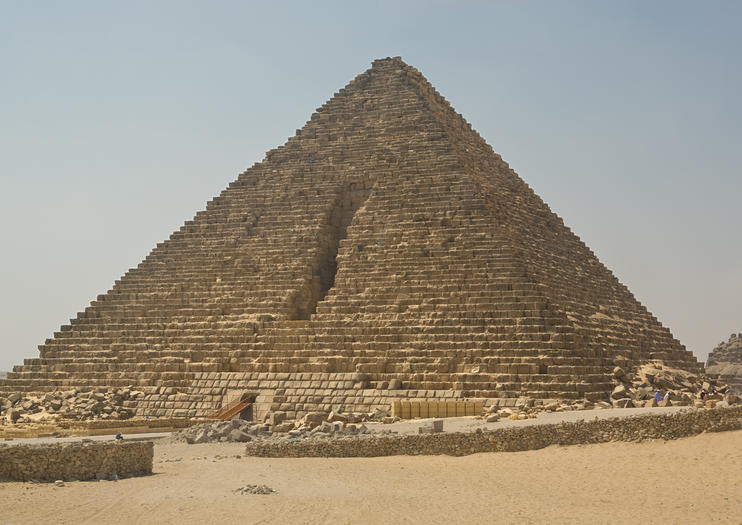 The smallest of Cairo’s three main Giza Pyramids, the Pyramid of Menkaure stands with its two counterparts on the Giza Plateau on the southwestern edges of Egypt’s capital. As part of Cairo’s most-visited attraction, this 4,500-year-old tomb is seen by millions of tourists each year.

The Basics
Built by the 4th-dynasty pharaoh Menkaure as his own tomb, the Pyramid of Menkaure was completed in 2,490 BC and originally stood 213 feet (65 meters) tall. Constructed from limestone and granite, it now measures 204 feet (62 meters) due to the removal of its limestone casing. It stands just southwest of the Great Pyramid of Khufu (Cheops) and the Pyramid of Khafre, constructed in turn for Menkaure’s grandfather, Khufu, and father, Khafre.

There are various ways travelers can experience the Pyramid of Menkaure and its two companion tombs. Take a private trip that covers Giza before continuing to other Cairo must-sees such as the Egyptian Museum, or choose an in-depth tour that focuses on Giza alone. Alternatively, book a tour that calls at Giza, ancient Saqqara, and Memphis or see it as part of a multi-day Cairo break or guided journey around Egypt.

How to Get There
The easiest way to travel independently to the Giza Pyramids, about 12.5 miles (20 kilometers) from downtown Cairo, is by cab. Allow a 60- to 90-minute journey to negotiate Cairo’s traffic. Another option are the buses to Giza that leave from Abdel Menem Riyad Station in Tahrir Square—look for the white coaches marked CTA.

When to Get There
The Giza Plateau is open from 7am to 5pm daily between October and March and 7am to 7pm from April to September. Times are subject to change, so check locally beforehand. Interior entry to the pyramids involves an additional cost and depends on which pyramids are open on the day. To explore the pyramids at their quietest, avoid the 9:30am–10am rush of tourist coaches.

Explore Inside the Pyramid of Menkaure
If it’s open, it’s worth exploring inside the Pyramid of Menkaure. Descend the passageway to the antechambers—one with decorative panels and another with niches used for storing treasures—and view the vaulted chamber that held Menkaure’s sarcophagus. Be sure to view the hieroglyphics at the pyramid entrance: They spell out the date of Menkaure’s death.
Address: Al Ahram, Giza Governorate, Cairo, Egypt
Admission: Varies
Read MoreShow Less

3 Tours and Activities to Experience Pyramid of Menkaure

Your Visa to Giza: Walking Tour of Giza Pyramids, Temples and Tombs

2
Come along for a humorous ride through art, architecture, history and astronomy. Tour is led by the legendary Egyptologist Ahmed Seddik who speaks with hilarity, clarity and jocularity. Walking Tour of Giza Pyramids, Temples and Tombs Pyramid of Khufu Pyramid of Khafre Pyramid of Menkaure Pyramids of the Queens Khufu's Boat Tomb of Idu, Overseer of the Construction of the Great Pyramid Tomb of Qar (G 7101) The Sphinx The Valley Temple of King Khafre
…More
From
USD61.79
From
USD61.79

Giza Pyramids and Sphinx Half Day Tour From Cairo

9
Witness the Giza Pyramids and Great Sphinx on this 4-hour private tour from Cairo or Giza. Travel to the Giza Plateau by air-conditioned minivan, and stroll around the three pyramids, the last remaining Ancient Wonder of the World. Gaze at the massive Great Pyramid of Cheops and the smaller structures of Chephren and Mycerinus as you hear about their construction and the pharaohs behind them. Then, see the valley temple and Great Sphinx, the human-headed statue next to the pyramids, as your guide recounts the mysteries that still surround it.
…More
From
USD39.99
Price varies by group size
From
USD39.99
Price varies by group size
Face masks required for travellers in public areas
Face masks required for guides in public areas
Face masks provided for travellers
Learn More
Taking safety measures

Explore the plateau of Giza (dawn of civilisation) with this luxury tours. Enjoy unforgettable day with a first class qualified Egyptologist tour guide who will give in depth culture explanation and endless stories about the sites. Indulge in a camel ride adventure and feel the luxury in a Mercedes E 250. and enjoy your lunch at a top notch restaurant.
…More
From
USD450.00
Price varies by group size
From
USD450.00
Price varies by group size
Face masks required for travellers in public areas
Face masks required for guides in public areas
Face masks provided for travellers
Learn More
Taking safety measures

Things to do near Giza