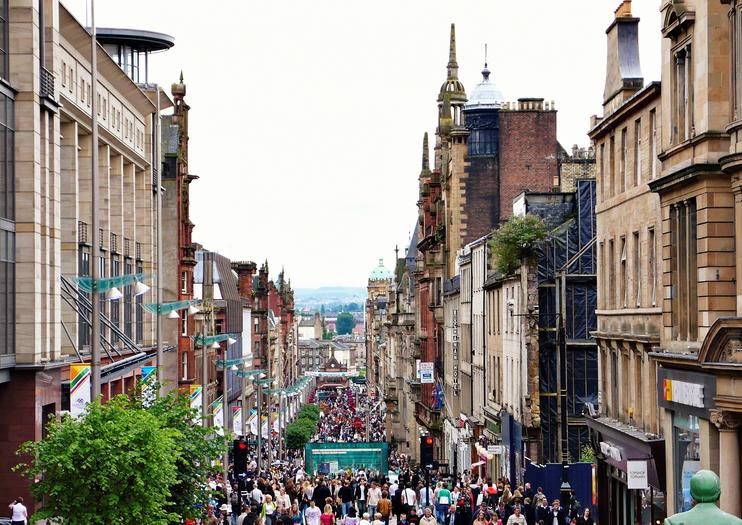 Sweeping through the heart of the Style Mile in Glasgow city center, Buchanan Street hosts some of Scotland’s best shopping, bars, restaurants and cafes.
A hodgepodge of high street and designer names tucked inside some of Glasgow’s grandest Victorian buildings, Buchanan Street is especially busy on Saturdays, when the young and glamorous hunt out new fashions and street performers entertain the crowds.
At the north end is the Glasgow Royal Concert Hall and the Buchanan Galleries shopping mall, which hosts more than 90 brand-name stores. Toward the southern end, the refined Art Nouveau atmosphere and designer goods of Princes Square draw ladies who lunch. One of the most upmarket retail streets in the United Kingdom, Buchanan Street is also home to the flagship House of Fraser department store, which boasts Scotland’s largest beauty hall and is conveniently located right across the street from Princes Square.
Fans of the late Scottish architect Charles Rennie Mackintosh will love Buchanan Street’s Willow Tea Rooms, replete with the iconic designer’s signature high-backed chairs. Look out for Nelson Mandela Place as you shop ‘til you drop; in 1986, the handsome square was named after Mandela in protest of his imprisonment by the South African Apartheid regime.

A pleasant half-mile stroll from north to south, Buchanan Street is car-free and open to foot traffic, except at intersections. The shopping hub is easy to reach and served by two subway stations: Buchanan Street station at the northern end and St. Enoch to the south. If coming to Buchanan Street by train, it is a three-minute walk from Glasgow Central Station heading east along Gordon Street.
Address: Buchanan Street, Glasgow, Scotland
Read MoreShow Less

71
With just one day in Glasgow, a private tour will ensure you check off all the highlights without feeling rushed by a fixed tour itinerary. On this half-day tour, see the People’s Palace, GoMA, and the Necropolis; admire landmarks such as the Glasgow Cathedral, the Duke of Wellington statue, and Mercat Cross; and get a taste of local life as you stroll around George Square, Glasgow Green, and Buchanan street.
…More
From
USD258.07
per group
From
USD258.07
per group

A Silent Disco Adventure in Glasgow

3
Join the Silent Adventures Team as we take you on a journey of song and dance through the famous streets of Glasgow. This musically instructed adventure aims to have your funky moves on display and your pop star voices serenading the people of the city! Hi-tech headsets will fill your body with beats, theme songs and your favourite hits across the decades. As your inhibitions evaporate and laughter takes over, you will be part of the best all dance, all singing walking tour in town! It's a Flash Mob, it's a Silent Disco, it’s a roaming, rhythmic riot through Glasgow!
…More
From
USD22.50
From
USD22.50

14
For a ghastly sightseeing quest with a gamified twist, don't miss this Glasgow sightseeing adventure where you solve clues while exploring some of the most haunted destinations in the city. Using your smartphone to navigate, you unlock stories and solve different clues as you adventure across the city. You can walk haunted streets, visit the Lighthouse, George Square, Merchant City, and more, and follow your helpful app as you go.
…More
From
USD9.21
Price varies by group size
From
USD9.21
Price varies by group size
Social distancing enforced throughout experience
Regular temperature checks for staff
Paid stay-at-home policy for staff with symptoms
Learn More
Taking safety measures

We offer ½ day, full day and multi day tours depending on the time and the budget that you have. All tours are exclusive to you and your party (1-7 passengers) in our exclusive Mercedes Bens V-Class AMG model executive vehicles, which come with the following as standard – Client controlled air con/Wi-Fi/on-board refreshments/AC charging facilities for mobile devices and cameras. Contact us and we will work with you so we can include the things you really want to see, spending more time at the places you want to spend time at, and leaving the things and places you don’t get to see for the next time you visit us.
…More
From
USD554.80
per group
From
USD554.80
per group
Face masks required for travellers in public areas
Face masks required for guides in public areas
Face masks provided for travellers
Learn More
Taking safety measures

14
Make the most of your time in Glasgow with a skip-the-line reservation at the city’s all-new Hard Rock Cafe. With your booking, breeze past the queue, grab your seat amidst exciting rock memorabilia and enjoy a 2- or 3-course American-style meal. Grab a souvenir to take from the cafe’s Rock Shop!
…More
From
USD25.84
From
USD25.84
Face masks provided for travellers
Hand sanitiser available to travellers and staff
Social distancing enforced throughout experience
Learn More
Taking safety measures

Join us for this half day tour of Glasgow, Scotland’s biggest city. Let your professional guide lead you around the highlights of the city. Discover the history of Glasgow, from its boom during the industrial revolution, through to its transformation to a centre for education and culture today. Your guide is packed full of knowledge and stories to bring your tour to life, while you experience the best Glasgow has to offer.
…More
From
USD237.51
Price varies by group size
From
USD237.51
Price varies by group size
Hand sanitiser available to travellers and staff
Social distancing enforced throughout experience
Guides required to regularly wash hands
Learn More
Taking safety measures