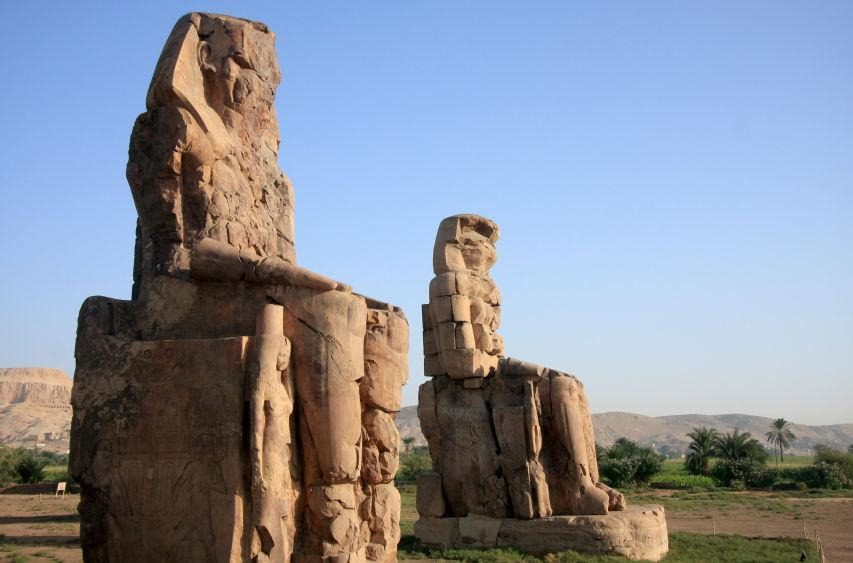 With the mighty Nile flowing through its center, Luxor is often described as a city of two halves—the modern East Bank and the picturesque West Bank, an archaeological paradise. Here are some famous sites not to miss while exploring Luxor’s historic side.

Valley of the Kings

Considered among the most significant archaeological destinations on earth, the Valley of the Kings was the burial place for many of Egypt’s New Kingdom pharaohs—the most famous of which is the tomb of Tutankhamun, aka King Tut. The remaining tombs are divided into three sections; those of Ramses VI and Ay rank among the most beautiful, thanks to their intricate detail.

One of the most underrated historical sites in Luxor is the Temple of Ramses III, situated at the base of the Theban mountains. It’s best to visit this quiet complex—a palace and town surrounded by a defensive wall—in the late afternoon.

This impressive mortuary temple, built by Queen Hatshepsut, seems to blend in with the limestone cliffs from which it was cut. The meticulously restored complex happens to sit on one of the hottest places on the planet, so most visitors come in the cooler morning hours.

Valley of the Artisans

It took a small army of builders and artisans to construct the magnificent monuments in the Valley of the Kings, and those workers lived in a village today known as the Valley of the Artisans. You can still make out the streets and outlines of old buildings, and a visit offers fascinating insight into the daily lives of average ancient Egyptians.

Standing nearly 60 feet (18 meters) above the desert plain, the two faceless statues of Pharaoh Amenhotep III are often the first monuments you’ll see when visiting Luxor’s West Bank. Each of the two Colossi was cut from a single block of stone.

7 Tours and Activities | All Luxor Tours

364
Experience ancient Egypt’s most iconic sites on a full-day tour to Luxor from Hurghada, El Gouna, or Makadi. Explore a complex of royal tombs in the Valley of the Kings, and walk the imposing arcades at the Temple of Queen Hatshepsut, the powerful ruler who became Egypt’s first female pharaoh. Slip between the crumbling Colossi of Memnon, stroll through the chapels, temples and sacred lake at the Karnak Temple, then return to the present with a trip to an alabaster factory and papyrus bazaar.
…More
From
USD93.40
From
USD93.40
Face masks required for travellers in public areas
Face masks required for guides in public areas
Face masks provided for travellers
Learn More
Taking safety measures

4
Devote a day to the wonders of the West Bank on this full-day sightseeing tour from Luxor. With a qualified Egyptologist guide to show you the sights, travel to the Nile's western shores and investigate the age-old treasures scattered around the valleys and mountains. Explore three tombs at the Valley of the Kings, see the Temple of Queen Hatshepsut, Colossi of Memnon and Temple of Ramses III. Plus, explore the Valley of the Artisans, where the ancient tomb builders once lived. The tour includes a delicious lunch and air-conditioned transportation.
…More
From
USD128.00
Price varies by group size
From
USD128.00
Price varies by group size

109
Take a Valley of the Kings tour and explore the Temple of Queen Hatshepsut on this 4-hour private trip from Luxor, with your very own Egyptologist guide. Head for the West Bank and discover the hieroglyph-coated chambers of the Valley of the Kings, the mountain-cut tombs of 62 of ancient Egypt’s rulers, as you learn about the pharaohs once buried here. Then, visit the stunning Temple of Queen Hatshepsut, and stop to see the towering Colossi of Memnon as your guide reveals captivating facts about these age-old monuments.
…More
From
USD80.85
Price varies by group size
From
USD80.85
Price varies by group size
Face masks required for travellers in public areas
Face masks required for guides in public areas
Hand sanitiser available to travellers and staff
Learn More
Taking safety measures

5
Experience the highlights of the Nile’s West and East Banks on this private day trip from Luxor. Admire the soaring columns, halls and sanctuaries of breathtaking Karnak and Luxor Temple on the East Bank. Then, switch your sights to the mountain tombs of the Valley of the Kings, and stunning Temple of Hatshepsut, Colossi of Memnon and Temple of Ramses III on the West Bank. As you explore, hear tales of the pharaohs and peoples who built these masterpieces some 4,000 years ago from your very own, private, informative Egyptologist guide.
…More
From
USD112.00
Price varies by group size
From
USD112.00
Price varies by group size

1
Explore the West Bank’s most iconic sites with private transfer from Luxor to 3 monuments of your choice. Customize the 4-hour tour to your interests; discover ancient tombs in the Valley of the Kings, the workmen’s village of Deir El-Medina or the arresting Temple of Hatshepsut. Enjoy the simplicity and comfort of a pre-booked, air-conditioned car with a personal driver.
…More
From
USD87.00
Price varies by group size
From
USD87.00
Price varies by group size

5
See the millennia-old treasures of the West and East Banks of the Nile on this 2-day tour in Luxor, with guided tours included and optional 3-star Luxor hotel accommodation. Over two days, discover the stories and secrets of sites including the pharaonic tombs of the Valley of the Kings; mighty Karnak; the Colossi of Memnon, Luxor Temple and the Temple of Ramses III, all with a qualified Egyptologist guide. Learn about the monuments' history and construction during each visit, and enjoy round-trip air-conditioned transport to and from the sites.
…More
From
USD128.00
Price varies by group size
From
USD128.00
Price varies by group size
Face masks required for travellers in public areas
Face masks required for guides in public areas
Social distancing enforced throughout experience
Learn More
Taking safety measures

Horseback Camel or Donkey Ride Along the West Bank

Admire the West Bank's pleasant scenery on the back of a donkey, horse or camel during this 4-hour tour from Luxor. Choose your riding companion and set off through the area's banana plantations, date palm groves and sugar cane. Get to know your animal and listen to historical and cultural commentary from your guide as you pass through verdant fields and charming villages. No riding experience is necessary; this excursion is suitable for riders of all skill levels. Round-trip transportation from select Luxor hotels is included.
…More
From
USD61.54
From
USD61.54