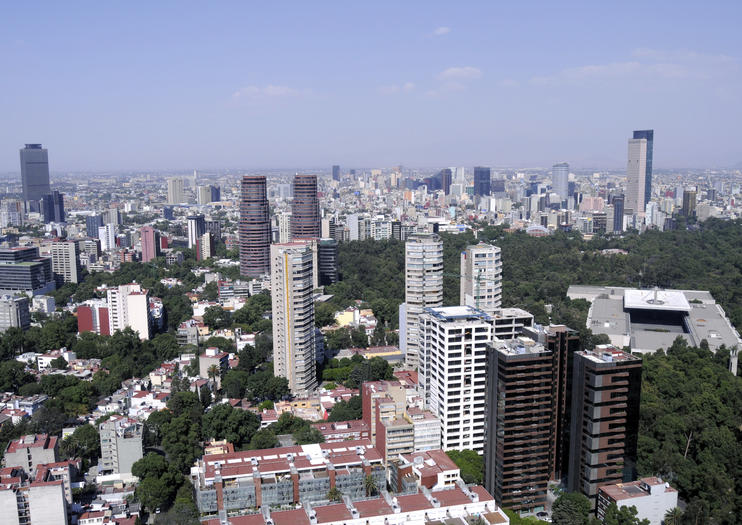 Just north of Mexico City’s Chapultepec Park (Bosque de Chapultepec), the upscale district of Polanco is home to some of the country’s wealthiest families. In addition to high-end real estate, the city’s most luxurious hotels and priciest restaurants line the streets of the district’s five neighborhoods. At the center of it all is the welcoming green space of Parque Lincoln.
The Basics
Polanco is known primarily for its new residential and business developments, as well as its luxe shopping spots and fine-dining restaurants. The district also houses several cultural attractions. The Soumaya Museum (Museo Soumaya) features Mexican billionaire Carlos Slim’s collection of art, with works by Picasso, Renoir, Dalí, Van Gogh, and others, and the outdoor Angela Peralta Theater hosts music performances and theater productions.
Things to Know Before You Go
How to Get There
Polanco is about a 50-minute drive from Mexico City International Airport and a 35-minute ride from the historical center. The closest metro stations are Auditorio (on the edge of Chapultepec Park) and Polanco.
When to Get There
Many businesses and shops close between 2pm and 4pm, and traffic can be heavy around that time. Mexico City’s peak tourist season typically runs from November to May, so it may be more difficult to get a table at Polanco’s popular restaurants then.
The National Museum of Anthropology
Located on the southern edge of the Polanco district, along Paseo de la Reforma, the National Museum of Anthropology (Museo Nacional de Antropología) houses the largest collection of ancient Mexican art in the world. On display at Mexico City’s most-visited museum are such notable historical items as the Aztec Stone of the Sun, the giant carved heads of the Olmec people, and the Aztec Xochipilli statue.
Address: Polanco, Miguel Hidalgo, Mexico City, FD 11550, Mexico
Read MoreShow Less

7 Tours and Activities to Experience Polanco

2
A journey you'll never forget, in the taco capital of the world. Not only will you have the best tacos, but also you'll try a unique mezcal right from the producers' hands, a mezcal you won't find somewhere else.
…More
From
USD89.00
Price varies by group size
From
USD89.00
Price varies by group size
Face masks required for travellers in public areas
Face masks required for guides in public areas
Hand sanitiser available to travellers and staff
Learn More
Taking safety measures

OVERVIEW Visiting Mexico City but wishing to experience flavors of other Mexican regions? Then this tour was designed specifically for you! In 8h we will visit 10+ gastronomic locations in Polanco neighborhood trying most typical foods & drinks from Mexico's 7 regional cuisines - one different from another. Enjoy various tastes, ingredients, live commentary about the origins & history of particular dishes while learning about architectural & historic heritage of one of the chicest neighborhoods in Mexico City. WHY GO WITH US The time of the tour is spent purely on gastronomic experiences & sightseeing: no visits to souvenir shops (unless you ask). We are flexible: the program, route & activities can be adjusted to your interests while the duration of the tour can be always extended for an extra fee.
…More
From
USD153.00
Price varies by group size
From
USD153.00
Price varies by group size
Face masks required for travellers in public areas
Face masks required for guides in public areas
Hand sanitiser available to travellers and staff
Learn More
Taking safety measures

Private Tour in the Historic Center / Polanco and Reforma

14
Riding a bike, trying food and getting to know a city, it is always better with friends, it is because on this trip, we have decided to stop treating people as tourists, we are more the type of riding a bike with friends, sharing the beauty That hides this great city.
…More
From
USD59.00
From
USD59.00
Face masks required for travellers in public areas
Face masks required for guides in public areas
Hand sanitiser available to travellers and staff
Learn More
Taking safety measures

1
Know this historic hacienda which it´s edification dates back middle of the 16th century, located in the lands where the first mulberry trees were planted for the raising of the silkworm, reason that inspires to this wonderful place would be named: La Hacienda de los Morales. This place has more than 400 years of history and also has works of great painters such as José María Velasco, german Gedovius, Daniel Thomas Egerton y Conrad W. Chapman. Currently it has transformed in a magnificent restaurant inside of a great city, where you can taste a delicious threecourse lunch or dinner while live music does more unforgettable your experience. Take a photo like a Mexican style, with charro hats for the memory !!
…More
From
USD78.00
From
USD78.00
Face masks required for travellers in public areas
Face masks required for guides in public areas
Hand sanitiser available to travellers and staff
Learn More
Taking safety measures

Things to do near Mexico City