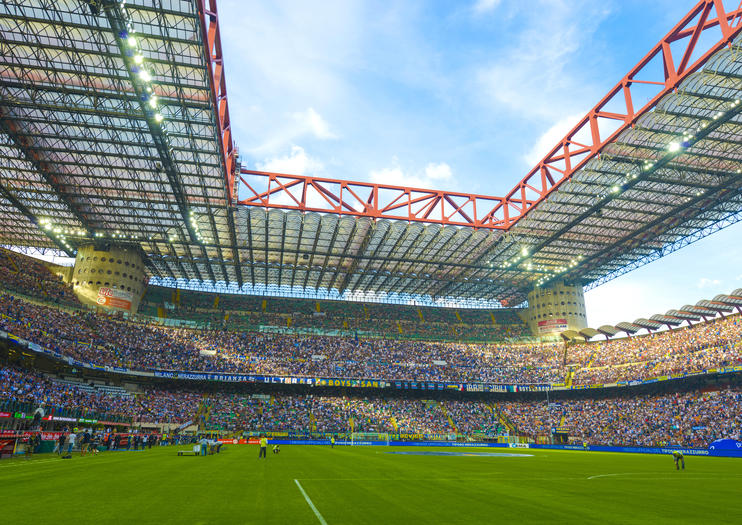 Milan hosts two top-division soccer (football) teams at San Siro Stadium, the largest in Italy. Also known as Stadio Giuseppe Meazza, the stadium was built in 1925 for the AC Milan team, and in 1947, the rival FC Internazionale team, known as Inter, also moved in. Today, up to 80,000 fans fill the stadium to watch live games.
The Basics
True footie fans can join a Milan football tour that includes a San Siro Stadium tour of the field, the team locker rooms, and the stadium museum dedicated to the history of both the Milan and Inter clubs. Many soccer-centric tours also stop at Casa Milan, the stylish AC Milan headquarters. Otherwise, hop on a city sightseeing bus and combine stops at the stadium and museum with visits to other city highlights such as the Duomo and La Scala. San Siro is also used for concerts and other large events, so there are non-football opportunities to see the stadium as well.
Things to Know Before You Go
How to Get There
San Siro, located on Piazzale Angelo Moratti in the San Siro neighborhood west of downtown Milan, is easy to reach on public transportation: take the metro purple line (M5) or bus/tram 49 and 16.
When to Get There
The soccer season runs from August to May. The stadium museum is open daily from 9:30am to 6pm, though the hours may change on game days.
Italy’s Soccer Clubs
Football is Italy’s national sport, and home matches of Milan’s two Serie A teams are the greatest highlights of the year for fans. Emotions run high at their derbies—especially when the teams are vying for a spot in the Champions League or World Cup. Nearly every Italian city and town has a home football team. Milan and Inter are the two teams based in Milan, while other famous big-city clubs are Roma, Lazio, Juventus, and Napoli.
Address: Italy
Admission: Varies
Read MoreShow Less

50
Get an inside look at the famous San Siro Stadium, home of A.C. Milan and Inter Milan, with this self-guided entrance ticket. Visit the changing rooms, the mixed zone, and the tunnel where the players walk onto the ‘La Scala del Calcio’ during this stadium tour. Visit the attached museum which goes back 100 years in time and learn the history of the Milanese football teams.
...  More
From
USD25.43
From
USD25.43
Learn More

16
See the sacred football grounds of San Siro Stadium and Casa Milan on this half-day trip. Hop aboard a double-decker City Sightseeing bus and travel to San Siro Stadium, home to AC Milan and Inter Milan. After exploring the stadium museum, enjoy a light lunch at Casa Milan (if option selected), AC Milan’s modish new headquarters. Spend as long as you’d like at both sites, passing more city attractions on your open-top bus ride back to central Milan.
...  More
From
USD69.31
From
USD69.31
Learn More

700
See the most popular sights of Milan with a hop-on hop-off bus ticket good for 24 or 48 hours. Take in the views of this fashionable city from the top level of an open-air double-decker bus, from which you see the iconic Milan Duomo and the famous opera house La Scala. With three different bus routes to choose from, and opportunities to get on and off as much as you like, the city of Milan is yours to discover.
...  More
From
USD25.43
From
USD25.43
Learn More

Explore the world famous San Siro Stadium and Casa Milan museum on a 4-hour private tour. Avoid the long lines with skip-the-line entrance tickets to both attractions and jump right into learning about the Inter and AC Milan football clubs. Get to know more about Milanese football culture from your guide and admire the mix of old and modern architecture as you drive around the city.
...  More
From
USD427.70
Price varies by group size
From
USD427.70
Price varies by group size
Learn More

26
Get the most of out Milan with the Milan Pass, your 48-hour ticket to admission to the best of what the city has to offer. Get free entry to the rooftop of the Duomo's the city's magnificent cathedral, in addition to a handful of other attractions. In addition to that, get discounts on many other tourism-related sites. Opt for a standard Milan Pass and partake in a hop-on hop-off tour or free public transport; upgrade to a full pass to enjoy both.
...  More
From
USD91.32
From
USD91.32
Learn More

Enjoy Milan’s great architecture and history and wonderful sights during this private tour with your own private official tour guide and comfortably in your private luxury vehicle with chauffeur. Entrance to the cathedral of Milan included in the price of the tour. Your private driver, together with your private tour guide, will pick you up in your hotel in Milan and you won’t have to worry about the starting point of your tour. - SAVE COVID-19 SAFE - As this is a private tour we take care of maintaining social distance
...  More
From
USD393.02
Price varies by group size
From
USD393.02
Price varies by group size
Learn More

With our ELECTRIC BIKES you will see much more with less effort, enjoying the best even if you have little time!
...  More
From
USD46.24
From
USD46.24
Learn More

Things to do near Milan