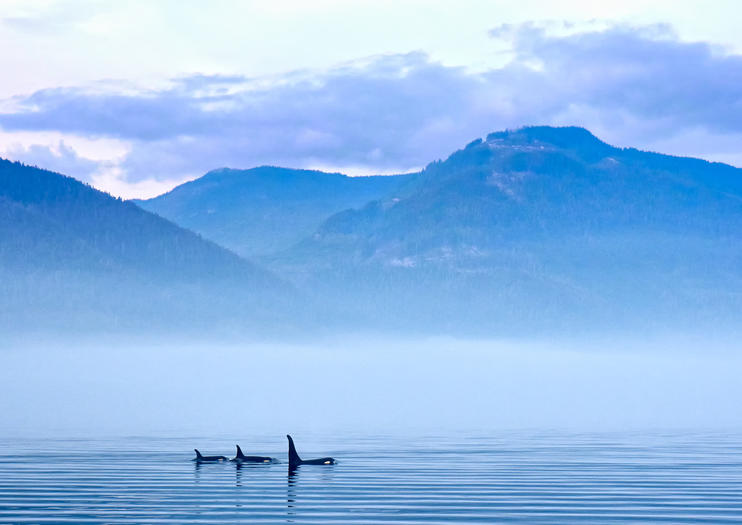 The stunning, 95-mile long Strait of Juan de Fuca is divided distinctly in half; the international border between Vancouver Island, in British Columbia, Canada, and the Olympic Peninsula in Washington State, USA, is drawn down its center.
In 2008, Chemainus First Nation in Canada proposed the name be changed to Salish Sea. Initially met with a positive public response, the request went through a lengthy bureaucratic process that involved different government departments in both the USA and Canada. Eventually, it was decided the Strait of Juan de Fuca would keep its name; however, the Salish Sea would be used to describe the entire area, which stretches from Desolation Sound south through the Strait of Georgia and Puget Sound to Hammersley Inlet.

On the Canadian side, the Juan de Fuca Marine Trail stretches 47 kilometers between China and Botanical Beaches. Aside from stunning coastal scenery, this entire hike is lined with plenty of beaches that offer outstanding – albeit, absolutely freezing – surf breaks. Pods of resident Orcas call the strait home, so whale-watching is popular from April to October. Along with killer whales, it’s common to see humpback, minke, and grey whales, seals, sea lions and porpoises, depending on the season.
Address: Victoria, Canada
Read MoreShow Less

3 Tours and Activities to Experience Strait of Juan de Fuca

Clear all
Apply
Select Dates
Today
Tomorrow
Price & Deals
USD
USD
Time
Time of DayDuration
Rating
More
Did you know?You can reserve your spot today and pay when you're ready.
Learn more
Did you know?
You can reserve your spot today and pay when you're ready.Learn more
Reserve Now & Pay Later
We'll reserve your spot today, and you can cancel up to two days* before your experience without making a payment. Secure your spot with ease, stay flexible, and never miss out.
How it works
Find your experience
Choose the experience you want knowing you can secure your spot without being locked in.
Make a booking
Reserve now and pay later to secure your spot, commitment-free.
Choose when to pay
Come back to pay once your plans are set, or let auto-pay kick in two days* before your experience.
Enjoy your experience
Now you're all set! Have a great time.
Frequently Asked Questions  | Terms & Conditions
*Up to 9 days depending on the booking/product
Sort by:Featured
Featured
Traveller Rating
Price (Low to High)
Price (High to Low)
Duration (Short to Long)
Duration (Long to Short)
New on Viator

10
Discover the native marine wildlife for which British Columbia is famous on this 3-hour bird and sea lion-watching tour from Victoria. Hop aboard your high-speed Zodiac vessel in Victoria and head out onto the Strait of Juan de Fuca’s rolling waves with your guide. Watch the water for possible sightings of graceful whales and porpoises, and gaze over the rocky coastline where playful seals and sea lions relax. Watch the skies for bald eagles, heron and other native bird life, and gain insight into the animals’ life cycles and hunting habits.
...  More
From
USD79.09
From
USD79.09
Learn More

26
The Canadian city of Victoria has a rich British colonial history dating back to the Victorian era, evident in its striking architecture and historic landmarks. Explore the city in style by traditional horse-drawn carriage, and take in sites of interest such as James Bay— one of Vancouver Island's oldest neighborhoods—and the Salish Sea waterfront. As your horse clops along, enjoy fine views over Victoria to the Olympic Mountain range beyond.
...  More
From
USD94.40
per group
From
USD94.40
per group
Learn More

Your private tour takes you to beautiful heritage and scenic places. Learn interesting stories from your guide. From Totem Poles park to the oldest China Town in Canada. Explore Victoria's Inner harbour with famous Empress Hotel, venture on a drive along spectacular Juan de Fuca Strait, and visit colourful Fisherman's Wharf. Our local guides are warm and welcoming and very knowledgable. Take time to browse through unique and eclectic shops near in Oak Bay village or Downtown Victoria. We will be driving from one exciting place to another, with suggestions and a chance to walk and photograph, or sit and take in the city at your leisure. You will learn some interesting facts and hear stories (if you'd like), about Victoria, British Columbia's history and culture. This tour is customized for your interests and your. This private tours are personalized to your interests and activity level for a great overview of the city of Victoria, British Columbia and Vancouver Island.
...  More
From
USD497.13
per group
From
USD497.13
per group
Learn More

Things to do near Victoria