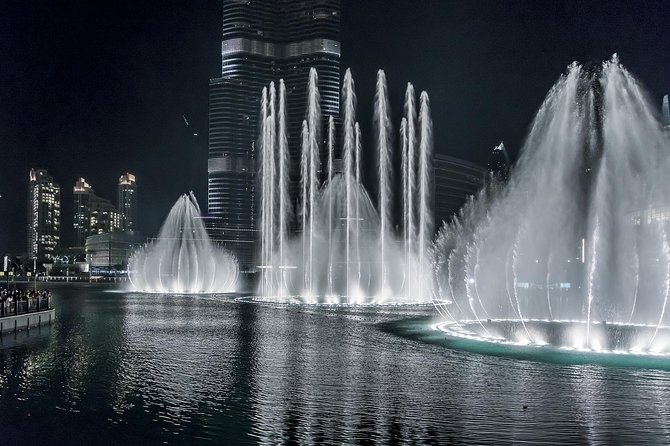 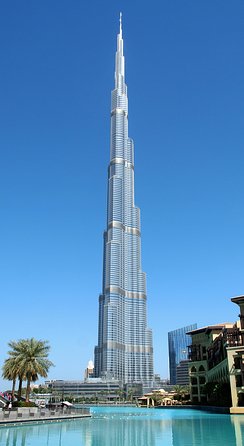 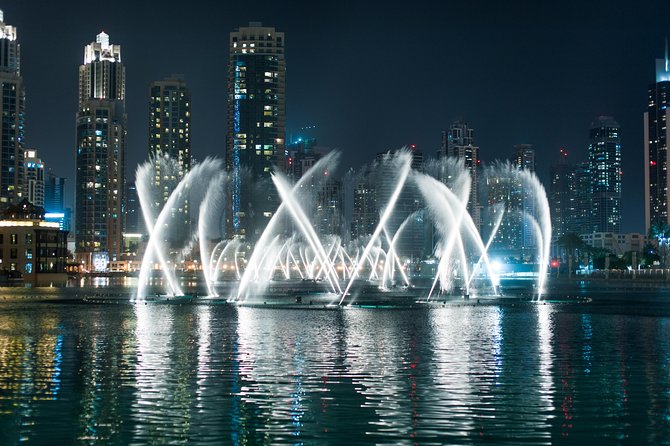 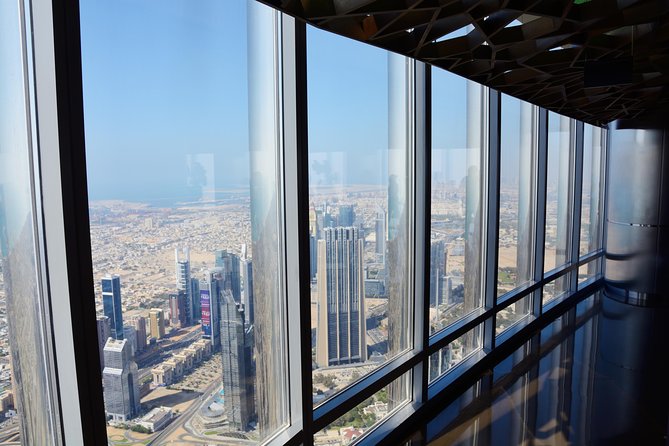 Taking in the views from the top of Burj Khalifa—the world’s tallest building—is a must for first-time visitors to Dubai. With this tour, visit the tower in the evening hours for the most atmospheric views, looking out over the illuminated city. For an even more unforgettable experience, combine it with another one of Dubai’s most popular attractions; the musical fountain show at the base of the tower.
See all things to do in Dubai

This experience doesn't have reviews yet, but see what other travellers said about the provider.

Dubai sightseeing after a cruise

Laila_P
Dubai City Tour with Burj Khalifa top 124th floor | Mar 2020
We toured the city with Ali Asgar of Sougat Travels. Our family group of 12 (all over 60 years) had just completed a 15 day cruise which ended in Dubai. We only had 2 1/2 days in Dubai before flying home. I made on line arrangements in October 2019 and travelled in February 2020. I was able to connect via WhatsApp with Sougat Travels while cruising to confirm arrangements. They were prompt in their replies. The tour company, for a reasonable fee, transported all of us and our baggages to our hotel. We arranged to disembark together and two vans were waiting for us to drive us to our hotel. We checked in, left our baggages and proceeded with our city tour in one van. Our driver and guide, Ali, identified all the significant stops, stopping at the best photo stop for each. The architecture of buildings in Dubai are awesome. Our tickets to go up to Burj Khalifa were provided and we went up avoiding delay in line ups. Ali identified meeting time and place and was attentive to our needs. We even added Miracle Gardens to our itinerary late in the afternoon and Ali returned in the evening to pick us up to take us to our hotel.
...Read more

Cha_V
Dubai City Tour with Burj Khalifa top 124th floor | Feb 2020
This tour is in a rush. Even so, we still missed several stops that included in the itinerary. The driver was hard to understand English and wasn't very helpful about giving detail information of the tour.
...Read more

Totravelistolive22
Dubai City Tour with Burj Khalifa top 124th floor | Nov 2019
The trip was rushed. In order to achieve the time frame given I had only 3 minutes at the top of Burj Khalifa. Also we were given not time to get any refreshment within 7 hours. However we were taken to an unscheduled shop. Where they attempted to sell us real gold wall hangings!
...Read more

charitylester
Dubai Desert Safari Including Buffet Dinner And Desert Camp Activities | Dec 2018
Our tour guide was phenomenal! The whole experience was amazing. Definite must do in Dubai...especially with our guide. Best around!
...Read more

An evening in the desert.

Fearless16056137969
Dubai Desert Safari Including Buffet Dinner And Desert Camp Activities | Dec 2018
Wonderful adventure. Would highly recommend. Guide was fluent in English and made this an unforgettable experience.
...Read more

Trek15751930015
Dubai Desert Safari Including Buffet Dinner And Desert Camp Activities | Nov 2018
Ride through desert was good, desert camp food and entertainment was good. What let the trip down was our guide, who seemed to spend the whole trip on his phone, even while driving the jeep on the sand dunes! Felt he did not explain things properly, he seemed to dump us at the camp without any proper information. We did not get our camel ride because of lack of explanation and sand boarding was never mentioned.
...Read more

It would have been great to have...

On the day, we waited for our instructor/driver to meet us in the lobby, only to be greeted by an unhappy man. The man claimed he had been calling our room many times but we obviously didn't respond as we were in the lobby waiting. Nonetheless, the man wasn't happy with us. We started the journey which was fine and they were pleasant until they started playing some incredibly explicit R-rated rap songs about women being objectified in the bedroom, whilst I appreciate it may have been on the radio - change the radio station! As a woman, I felt so uncomfortable and had I not been with another member, I would have asked to return to the hotel.

The tour itself ie. Quad Biking, Dune-Bashing etc was good, however, as I felt so uncomfortable by the driver partner, we returned early.

I would recommend this company for men only as I don't believe it is right for women, given my experience.

It seems like this was the first tour for them. People were standing around with no seating and the waiters did not even advise food was ready. The buffet was not lit up so I had to use my mobile phone flashlight to see the food i was putting on ny plate.

We had a good city tour guide, who gave...

We had a good city tour guide, who gave us a good overview of the places we visited. However, we did not end up doing all the places that was listed in our Iternary.
The desert safari was great and we had a great driver.

This was a really cool experience...

This was a really cool experience. The dune bashing was awesome and we had a great driver, the entertainment with dinner was excellent. However, I would have liked the camp to stay open a little longer. If you wanted to visit the camels, etc. you had to miss the dancers. As soon as the dancers were done, everything packed up so I missed out on the henna and the falcon. The staff who stayed on the campsite were incredibly helpful and friendly. I would recommend this as a fun experience for Dubai.

The actual day was wonderful but the...

The actual day was wonderful but the tour guide on the boat seemed to be more interested in having his own holiday and made barely any contact with the 3 solo travellers on the boat this day including myself and preferred to spend his time lounging on a sofa at the back of the boat or interacting with the young, gorgeous girls. Very unprofessional. E.g. when line fishing he was more interested in catching his own fish than helping the kids who were unsure of how to do it etc. However, the views were absolutely incredible and lunch was delicious. I would definitely go again. Would be 5 stars if the boat operator had not left his poor indian staff to do ALL the work while just lying around unprofessionally.

This tour was interesting. The tour...

This tour was interesting. The tour guide made it, he was terrific. Tour itself was interesting as we had only just arrived so a good way to see a little of Dubai first. Bring plenty of water, a hat and good sunglasses, it's incredibly hot

I got up at 6:00 to get picked up from my hotel at 6:30. We were in Oman in 11:40. Six hours to collect all the passengers from their hotels and reach the port?? Disaster!
Now for the trip: the boat was old, some of the railings on the top board were broken. The music someone played wasn't suitable for all the visitors for Indian people may be, but I am from Bulgaria and I prefer to listen something more appropriate for a boat trip. The snorkeling gear wasn't enough for everyone, some of the life vests were torn and probably unsafe.
The beach itself is rocky, so get yourself fins.
The food, however, was delicious, may be the only good think on this trip.
And the fishing..... oh, the fishing : This is the worst part ever. I admire when fisherman get on their boats to provide for their family, or to provide for other people. But fishing for fun is not the right entertainment, at least for me.
And HERE comes my worst experience on the boat and not only mine: one of the passengers caught a water snake. The snake was tangled to the fishing cord and was suffering, may be even suffocating. The skipper grabbed a knife and just cut the cord without releasing the suffering animal. And one of the tour guides I don't know his role, actually just said what can I do, man?.
So, the conclusion is, that I cannot recommend this trip to anyone: the ship is old and the crew cannot suppress it's barbaric habits. The beach is the worst I've seen ever and the whole experience wasn't worth the money.

This was such an amazing experience...

This was such an amazing experience. If you are an American looking for adventure, this is definitely the tour for you. The activities on this tour had a lot of variety, from snorkeling to banana boat riding to taking a smaller boat to the beach or simply relaxing on the boat. Lunch was amazing, and had a lot of variety-- and of course, loads for seconds! i encourage anyone to really get to know others on the tour. I ended up becoming friends with a lovely woman and her husband from Brazil, and also ended up being in a big group of people dancing on the main deck! Our little soiree included people from Singapore, India, and the UAE. We had a great time, and I still keep in touch with most everyone!